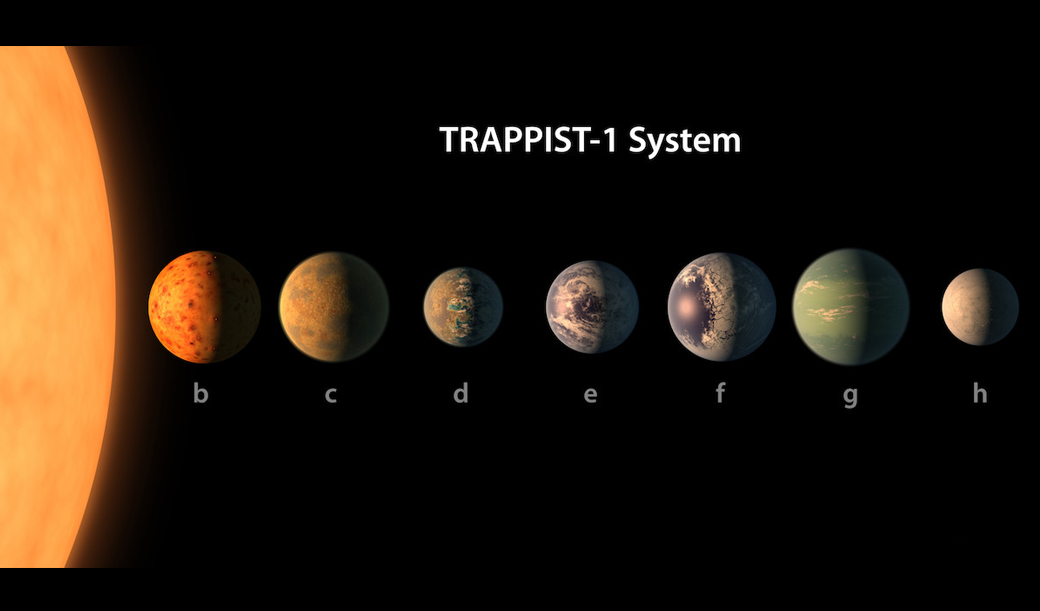 Astronomers have discovered not one, not two, but seven Earth-sized planets orbiting a star called TRAPPIST-1 and announced the discovery of 60 other potentially habitable planets.

What’s more, three of them are in what’s known as the “habitable zone”—where liquid water can exist on the surface of rocky planets like Earth.

The planets were detected using Nasa’s Spitzer Space Telescope and several ground-based observatories are described in the journal Nature.

Lead author Michaël Gillon, from Belgium’s University of Liège, said: “The planets are all close to each other and very close to the star, which is very reminiscent of the moons around Jupiter.”

“Still, the star is so small and cold that the seven planets are temperate, which means that they could have some liquid water – and maybe life, by extension – on the surface.” (source)

“The discovery gives us a hint that finding a second Earth is not just a matter of if, but when,” said Thomas Zurbuchen, associate administrator of the Science Mission Directorate at NASA, during a news conference announcing the discovery.

Zurbuchen called it a “major step forward” towards the goal of answering the very big question: Is there life on other worlds?

The discovery “is very promising for the search for life beyond our solar system,” Michael Gillon, an astronomer at the University of Liege in Belgium, added during the press conference.

This is the first time astronomers have found so many Earth-sized planets circling the same sun.

In 2016, three planets were discovered around TRAPPIST-1, and today four more were announced.

NASA also announced the discovery of 114 new planets, including 60 which are orbiting stars near the Earth.

“If you were on the surface of one of these planets, you would have a wonderful view of the other planets,” Gillon said, adding that “they would be much more than just “dots of light” in the sky, as we see other planets, like Venus, from our home planet.”

The number of confirmed exoplanets is now 3,449 according to the Exoplanet Catalog with thousands more of candidates but only a small number of discovered exoplanets meet the criteria for being possibly habitable.

In 2015, NASA announced it’s discovery of 1,000 planets and Australian researchers found a potentially habitable planet – called Wolf 1061c in the Wolf 1061 star system which is 14 light years away from Earth and four times the mass of the Earth.

“It is fascinating to look out at the vastness of space and think a star so very close to us — a near neighbor — could host a habitable planet,” Duncan Wright, from the University of New South Wales, told ABC News.

NASA stated that Keplar 452b was 60% bigger than Earth, it is likely to be approximately five Earth masses, which provides additional protection from the runaway greenhouse effect for another 500 million years,” NASA said.

In 2016 NASA said they discovered another 1,200 planets and a Super-Earth called Gliese 411b a sister planet of the Gliese star system and Gliese 832c another Super-Earth planet discovered in 2014 that is 16 light years away from Earth.

NASA discovered another cluster of alien planets in 2014 when they announced the discovery of 715 alien planets.

In our galaxy alone there are an estimated 8.8 billion planets that are earth-like, according to a study.

The Truth is definitely out there, with billions of planets in our own galaxy alone and as Neil Armstrong and NASA scientist Dr. Farouk El Baz has said, “Not every discovery has been announced”.

One of the best comments about this secrecy was made by Armstrong when he said that there are “great ideas undiscovered, breakthroughs available to those who can remove one of the truth’s protective layers.”

Do you think that we will discover alien life in our life time? Do you think that NASA and governments are colluding in conspiracy to cover up alien life? What are these military sightings of unidentified craft? Why are these craft always so interested in nuclear-based weaponry and always disabling the missiles and missile silos?

Oh and to further the evidence of a cover up, why did NASA Space program manager Wayne Hale admit that NASA “has been chasing these objects for many many years, rarely able to pinpoint where they came from and always finding out that they didn’t pose us any hazard?”