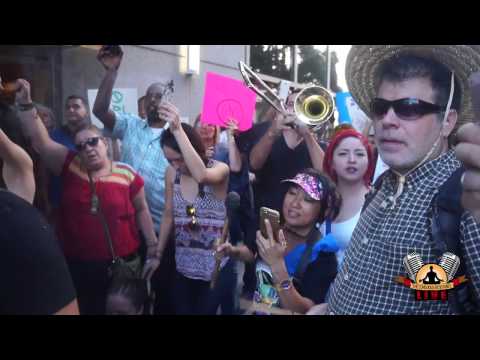 The International Stand with Standing Rock Day was yesterday, November 15, and thousands of people from all over the world held a ‘Day of Action’ for the protection of the environment and indigenous communities.

Activists stood in solidarity with the water protectors of the Standing Rock Sioux and its many allies. As a journalist I had the distinct honor of being in the city of Houston, Texas, the location of Energy Transfer Partners’ corporate offices, so of course we had to check it out, and show our support for such a just cause.

Things started ofo very peaceful with music and prayer, but quickly turned for the worse. One officer segregated a man from the crowd.  We are not sure what exactly started the confrontation but it was clear that the police were abusing their authority.

Over the course of protests, nearly 500 people have been arrested. A United Nations group representing indigenous people has said the federal government appeared to ignore treaties and the human rights of American Indians in the conflict. 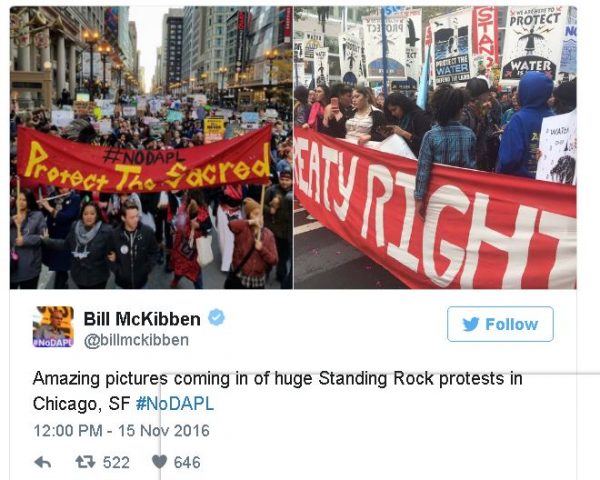 Despite ongoing, growing protests against the Dakota Access Pipeline and the federal government’s repeated requests that Energy Transfer Partners halt its construction, the company has reiterated its intention to continue building the pipeline, undaunted.

Wednesday’s action is a part of nationwide protests against the corporate powers behind Dakota Access. The demonstration will see members from communities affected by the fossil fuel industry from Richmond, California; Chicago, Illinois, the Gulf Coast, and others joining local Texas organizers to voice their collective opposition to Energy Transfer Partners’ pipeline projects, and to push for a just transition to renewable energy.

What is also clear is that us citizen journalists need to practice and prepare for this type of event , as this video shows it can be really easy to loose you cool in these tense situations.
Kim Wasserman of Little Village Environmental Justice Organization (LVEJO) in Chicago said,

“From Chicago to Houston we stand with all of our communities impacted by the oil and gas industry in fighting back. It took us twelve years to shut down the two coal plant[s] in Chicago, and we commit to fighting until our communities have justice.

“While these companies think they have only money and stocks to lose, we have to remind them it’s our lives and world at stake.”

“We stand in deep solidarity with our Indigenous brothers and sisters banded together to resist the Dakota Access Pipeline.

“Our fights are quite literally one: the Gulf South is where that Bakken crude oil will eventually end up for refining and transportation.”

“We are already on the frontline of environmental disasters, like the BP oil catastrophe, which we are still recovering from.

“It is time to put an end to extractive energy production, and the exploitation of our land and labor that comes along with that.”

“Clean water is a basic human right that should be afforded to everyone. No treaty, law or structure should have to reinforce a necessity, yet we understand that we live in a world driven by corporate greed that sacrifices sacred lands, vulnerable populations and people of color.

“I am humbled by the solidarity and courage of grassroots, big greens and supporting organizations from all over the country who are demonstrating to face Energy Transfer Partners at their doorstep in the house of the largest petrochemical complex of the nation.”

“Together we press forward, rise, and demand a clean world for future generations in our struggle to survive.”