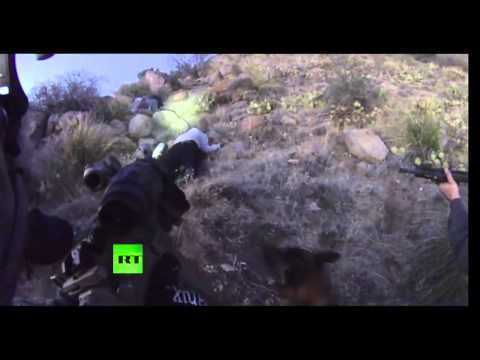 Albuquerque police have violently cracked down on protesters, using tear gas and arresting several demonstrators, after over nine hours of unrest. Hundreds expressed their anger over last week’s police shooting that saw a homeless man killed.

At the beginning of the rally, protesters asked police to take responsibility for their actions.“The police serve us, they do not kill us,” one protester told the local KRQE media outlet, while one of the demonstrators held a sign that read, “APD: Dressed To Kill.”

Another activist, Alexander Siderits, 23, told AP he was participating because he was “fed up” with how police treat citizens.

“It has reached a boiling point, and people just can’t take it anymore,” he stressed.

However, another activist stressed that the rally wasn’t about hating police, rather about standing up for injustice, as he spoke through a microphone to others in the crowd.

Protesters initially gathered around noon on Sunday and marched towards the local police headquarters shouting, “We want justice.”

Several people were dressed up for the rally, with their faces painted and posters in their hands. They were shouting, “Hey hey, ho ho, killer cops have got to go.”

Albuquerque mayor Richard Berry said the protest had descended into “mayhem” and one police officer had been injured in clashes with the protesters.

“We respected their rights to protest obviously,” Berry said to the Albuquerque Journal, “but what it appears we have at this time is individuals who weren’t connected necessarily with the original protest … they’ve taken it far beyond a normal protest.”

The protesters are angry at the Albuquerque police’s involvement in 37 shootings, 23 of them fatal, over the past four years. Many believe it is far too many for a city with around 550,000 inhabitants. The most recent case of a police shooting happened on March 16 when a homeless man was shot dead on the east side of Albuquerque. The incident was caught on video and the FBI has now opened an investigation into the man’s death.