By Bombing the Syrian Government, Trump Turned The U.S. Into ISIS’ Air Force 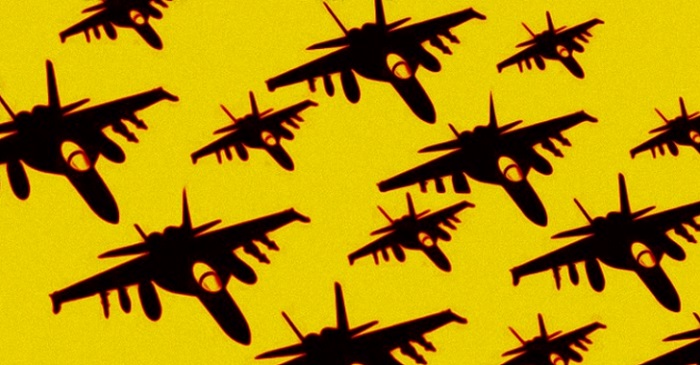 Who benefits from a military strike on the Syrian government? Certainly not the ideals that Donald J. Trump and his supporters claim to stand for considering the Syrian government is famous for protecting the rights of Christians and other minority groups. Conversely, according to a report from a think-tank founded by alleged war-criminal Tony Blair, the majority of the rebel groups currently attempting to defeat the Syrian government share ISIS’ core ideology. The report also found it was pointless to distinguish between these groups because they all work together on the ground.

These groups could establish Sharia law in an instant if Syrian president Bashar al-Assad falls, and this includes the so-called Free Syrian Army (FSA), which has been hijacked by extremists for years.

So what do we know about Trump’s recent decision to strike an airbase facility inside Syria? We know the U.S. government has accused the base of being complicit in chemical weapons attacks, but we have not been presented with any evidence for this claim. However, what we do know about the recent chemical weapons attack that inspired Trump to do a complete 180 on his approach to Syria is that, as identified by Scott Ritter, a former U.N. weapons inspector in Iraq:

“A critical piece of information that has largely escaped the reporting in the mainstream media is that Khan Sheikhoun is ground zero for the Islamic jihadists who have been at the center of the anti-Assad movement in Syria since 2011. Up until February 2017, Khan Sheikhoun was occupied by a pro-ISIS group known as Liwa al-Aqsa that was engaged in an oftentimes-violent struggle with its competitor organization, Al Nusra Front (which later morphed into Tahrir al-Sham, but under any name functioning as Al Qaeda’s arm in Syria) for resources and political influence among the local population.”

Further, what we actually know for sure about the military base targeted by Trump is that the base was integral in the fight against ISIS. As noted by the Los Angeles Times:

“For residents of Shayrat and other villages, the airbase was instrumental in keeping at bay Islamic State militants hiding the eastern district of Homs.” [emphasis added]

With the base now potentially damaged, residents expect ISIS to advance in the near future. For one resident, Trump’s attack was “proof that the U.S. helps Daesh [an Arabic acronym for ISIS]”.

According to the governor of Homs, ISIS did, in fact, use the American air raid to launch an offensive. Reuters quoted the governor as saying Trump’s attack amounted to “support for the armed terrorist groups, and it is an attempt to weaken the capabilities of the Syrian Arab Army to combat terrorism.” One should bear in mind that some of this information comes from Russian and Lebanese news media sources who have a vested interest in propping up Assad. However, the source on the ground is reportedly the Homs governor, and if you find yourself questioning this as a source but trust Western media’s coverage of the so-called Syrian Observatory for Human Rights (which is run in England by one man who owns a clothes shop), then it may be time to reevaluate your stance on objective sources.

“The other winner in this sorry story is ISIS, which took advantage of the American strike against Al Shayrat to launch a major offensive against Syrian government forces around the city of Palmyra (Al Shayrat had served as the principal air base for operations in the Palmyra region). The breakdown in relations between Russia and the United States means that, for the foreseeable future at least, the kind of coordination that had been taking place in the fight against ISIS is a thing of the past, a fact that can only bode well for the fighters of ISIS. For a man who placed so much emphasis on defeating ISIS, President Trump’s actions can only be viewed as a self-inflicted wound, a kind of circular firing squad that marks the actions of a Keystone Cop, and not the Commander in Chief of the most powerful nation in the world.”

Attacking Assad isn’t a Trump policy. It is a Hillary Clinton policy that has crept its way into the Trump administration through the ousting of key administration officials who looked to strengthen ties with Russia, coupled with the replacement of these officials by establishment insiders. Even without these damning facts, Trump surrounded himself with war hawks very early on in his political career, thereby quelling any hope that he was truly going to “drain the swamp.”

The only people who benefit from these attacks on the Syrian government are religious fanatics backed by Saudi Arabia, Qatar, and the U.S. and its allies — certainly not Syrians on the ground (and certainly not Christians and other minority groups we would expect Trump to be more concerned about).

If you don’t believe this assessment, try to find a democratic fighting force within Syria concerned primarily with ousting Assad that is not in some way shape or form linked to al-Qaeda (and please send it my way).