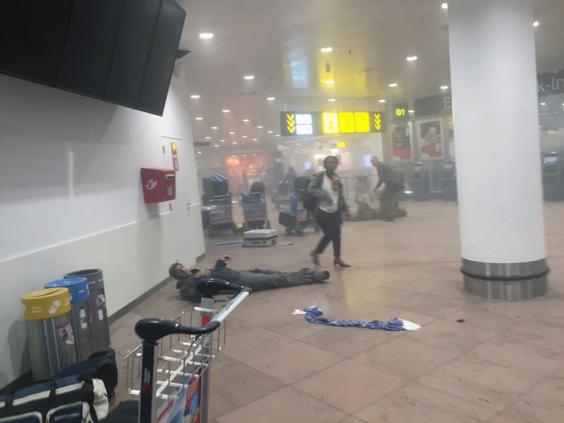 CCTV purporting to show the deadly Brussels Airport explosions appears to be fake.

The footage resembles a video of the moment a bomb attack took place at Domodedovo Airport in Russia in 2011.

But the clip, which shows people walking before they duck and flee following an explosion, has been widely shared on social media since the Brussels blasts took place on Tuesday morning.

Witnesses said two explosions were heard inside the departure hall of Brussels Airport shortly after 8am.
VRT news agency apologised on Twitter for the CCTV footage being fake.
Shortly after the airport explosion in Brussels, a blast was also heard at Maalbeek Metro station.

Local media is reporting that at least 13 people have been killed and 35 have been severely injured.

All flights at the airport have been cancelled and arriving planes have been diverted.

Belgium’s terror alert level has been raised to maximum.

The blasts come four days after Salah Abdeslam, one of the suspects of November Paris terror attacks, was arrested in Brussels.

In 2011, at least 35 people were killed and more than 100 were injured after a bomb attack at the Moscow airport. The suicide bomber was identified as a 20-year-old from the North Caucasus.