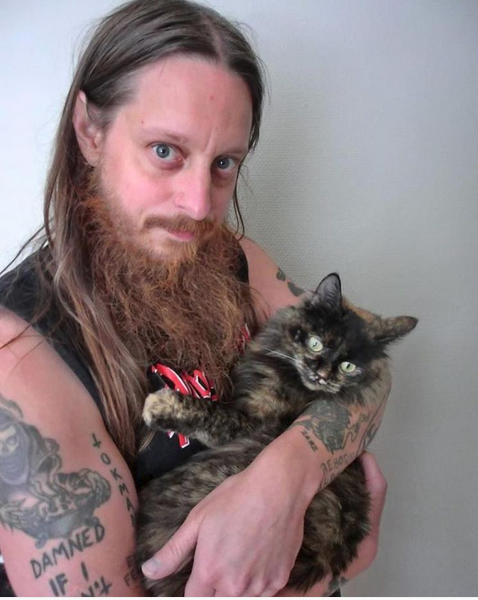 Singer Gylve “Fenriz” Nagell learned that people’s emotions can be paw-sitively influenced by cuteness after inadvertently being elected to his local town council as a back up representative in Kolbotn, Norway, because of his cat “Peanut Butter.”

Fenriz, a head singer for the Metal band Darkthrone, ran his campaign off of a single photo and simple slogan that should have cost him the election but it had the opp0site effect.

Instead Fenriz’s slogan “please don’t vote for me with a picture of his cat,” got him elected to his local council.

“My campaign was a picture of me holding my cat saying ‘please don’t vote for me’ but people just went nuts.”

In an interview with Clyrvnt, Fenriz explains how he didn’t want to be a council member and regrets being elected.

“Basically, they called and asked if I wanted to be on the list of backup representatives. I said yeah, thinking I would be like 18th on the list and I wouldn’t really have to do anything. My campaign was a picture of me holding my cat saying, ‘Please don’t vote for me.’ But people just went nuts. After the election, the boss called me and told me I was a representative. I wasn’t too pleased, and I’m not too pleased about it. It’s boring. There’s not a lot of money in that, either, I can tell you!”

Lesson learned. U.S. candidates Donald Trump and Hillary Clinton could learn a few things from Gylve “Fenriz” Nagell, take notes.  Having a pet makes you more electable, giving you a characteristic trait of showing you have love and compassion.

Pets have a consciousness. In fact Canada, New Zealand and France have now recognized animals as sentient beings, with a growing list of more countries recognizing our pets as capable intelligent creatures with a consciousness.

How long until Donald Trump and Hillary Clinton start sporting cats? Or maybe there will be a Caturday savior that enters the race independently with a cute cat on his shoulder?

Check out my communication cat “Sanders” named after the pussy cat that failed to stand up for himself against Hillary Clinton and the vote rigging in the primaries perpetrated against him by the DNC…oh yeah I went there.