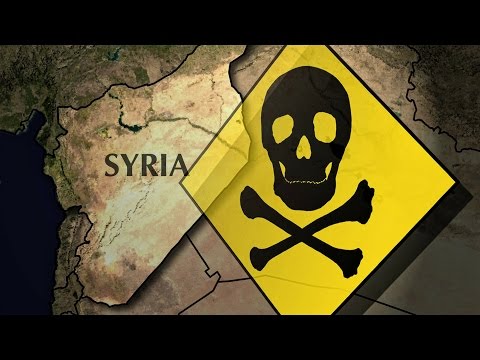 CNN anchor Kate Bolduan was left dumbfounded during a televised interview with congressman Thomas Massie in which he questioned the mainstream narrative that Bashar al-Assad attacked his own people with chemical weapons.

The CNN reporter was left speechless as she was questioned on the complicated situation that is Syria.

“It’s hard to know exactly what’s happening in Syria right now. I’d like to know specifically how that release of chemical gas, if it did occur — and it looks like it did — how that occurred,” Kentucky Representative Thomas Massie told CNN’s Kate Bolduan.

He continued to express his uncertainty regarding the attacks, questioning the motive of why Assad would suddenly attack his own people.

“Because frankly, I don’t think Assad would have done that. It does not serve his interests. It would tend to draw us into that civil war even further,” Massie said.

A sentiment shared by the Syrian Deputy Ambassador at the UN Security Council and two prominent journalists with knowledge on Syria.

“Who is the beneficiary of chemical attacks? It is the terrorist Forces that seek to topple our govt,” Syrian Deputy Ambassador at UNSC said.

Bolduan struggled for words after confronted by the congressman having her narrative smashed to pieces before muttering out a simple: “Who do you think is behind it?”

Massie proceeded to answer her question before the CNN anchorwoman cut him off and asked him if he was stating that he believes what the Russians are saying that Assad had nothing to do with the attack and that the attack was simply just chemicals stored in an ammunition depot.

However, the lawmaker stuck to his guns, reiterating his earlier position to Bolduan:

“I don’t think it would’ve served Assad’s purposes to do a chemical attack on his people…It’s hard for me to understand why he would do that — if he did,” Massie said.

If Bolduan was a good journalist like Seymore Hersh, that didn’t just read off a teleprompter, but thought for herself, she would know that contrary to popular belief, rebels in the region have been caught numerous times years prior gassing their own people and were even condemned by a UN official.

Then there is a UN report that states that Al-Tamanah on the night of April 29-30, 2014 might well have been staged by rebels and then played up by activists through social media.

“Seven witnesses stated that frequent alerts about an imminent chlorine weapons attack by the government had been issued, but in fact no incidents with chemicals took place,” the U.N. report stated. “While people sought safety after the warnings, their homes were looted and rumours spread that the events were being staged. … They these witnesses had come forward to contest the widespread false media reports.”

Then there is the fact that in 2016 Syria handed over evidence to an international watchdog organization reportedly proving rebels used mustard gas against civilians.

Syrian authorities gave documents and samples evincing the use of mustard gas by rebels to the mission of the Technical Secretariat of the Organization for the Prohibition of Chemical Weapons (OPCW.)

Further, they stated that in January of this year the samples would be delivered to the Hague.

So, to rehash the question by the Syrian Deputy Ambassador and Rep Thomas Massie: why would Syria’s Assad gas his own people when only a few months ago he handed documents that proved rebels gassed civilians to a watchdog group and the Hague?

It’s also worth noting that Massie voted against the 2014 intervention into Syria. An excellent question to ask the rebels is “why haven’t you caught any of these horrendous attacks on video but you somehow capture the aftermath?”

[RELATED: Why ISIS, Obama and John Kerry Don’t Want You To Hear This Leaked Audio]