An explosion rocked the Olympic stadium in Rio the Maracanã Stadium after Brazilian police discovered a suspicious tool box and sent in a bomb defusal bot. 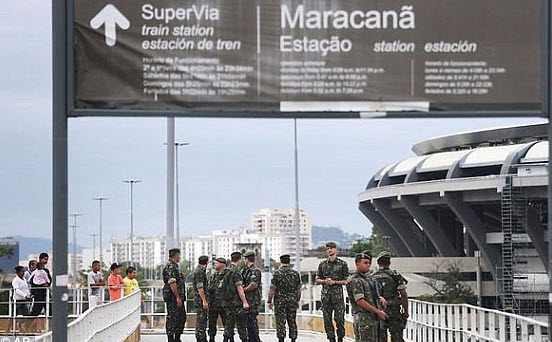 Police discovered a suspicious package in the Maracanã Stadium where rehearsals are going on for Fridays opening games ceremony.

The alleged bomb device turned out to be a tool box and when the robot was sent in the tool box exploded with a loud bang according to 7 news.

“There was definitely an explosion after the robot went in. We are trying to confirm whether the explosion was the robot destroying the package or the package went off before the robot got to it.”
~A Channel Seven spokesman said.

There were no reports of any casualties after the explosion. This comes after several Olympians have been robbed at gun point in Rio a city that is going through a rough financial patch something that we reported earlier last month when Rio declared a state of emergency and said they might have to cut public services.

Security has been stepped up by NOC the (National Olympics Commission) following these events and now Rio and international authorities are worried about the possibility of a terrorist attack during this years summer 2016 Olympic games.

The International Atomic Energy Agency (IAEA) has loaned hi-tech radiation monitors – including scanners and portable detectors – to local authorities to screen the ground for any radiation.
In fear that ISIS may use a dirty bomb after months of speculation that ISIS has the chemical compounds possible to make a dirty bomb.

“Recently, the militants have been using chemical weapons and suicide bombers, and before it was adults, now – teenagers From our intelligence, there is evidence that they are prepared, so to speak, to combine these two tactics and develop a method to supply chemical weapons to suicide bombers to use on the front.”
~General Akram Mohammed Abdulrahman said to RIA.

Brazil’s head of anti-terrorism Luiz Alberto Sallaberry said there is a “credible threat of ISIS attacks especially since the last few months of attacks.”

There was also a laptop discovered in 2014 with how to plans to make biological weapons including how to weaponize the Bubonic Plague so ISIS is experimenting with different terror tactics now the fear is growing that they may use a dirty bomb and the target may be this years Olympic stadium Maracanã in Brazil’s capital Rio. We will keep you up to date on any new developments and any news out of Olympics regarding this growing terror threat.