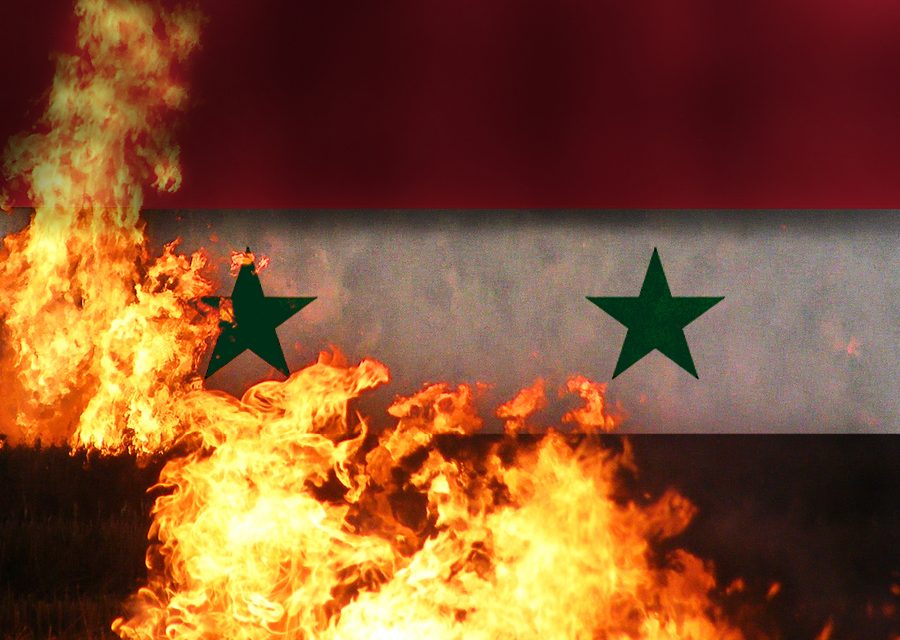 Obviously all everyone has been talking about this past week is the allegation made primarily by the Western media that Syrian President Bashar al-Assad used the lethal chemical weapon, Sarin, on civilians in Idlib province and the retaliatory US missile strike on a Syrian military airbase that followed.

Now we’re sure our readers know the mainstream media habitually lies and tows the same line as the Pentagon, mainly due to their defense contractor sponsors and shareholders. Yet we also know that there have been a lot of people cheering for Trump “acting presidential” and “finally doing what Obama wouldn’t.”

Even liberals, who portray Trump as being the next Hitler and spent over a year saying he couldn’t possibly be trusted to command the massive power of the US military machine, cheered as Trump took unilateral and illegal action against the legitimate government of Syria.

The obvious problem with this, as a lot of people have pointed out, is that the “evidence” the media and top US officials presented either came from extremely unreliable sources, ran counter to explanations issued by rival powers, or was just completely impossible to confirm. This article is intended to debunk the justifications used by the US that were presented as fact and not allowed to be investigated by any independent organization.

This will be a quick simple breakdown of why all of us should question the supposed facts presented this past week, and to help our readers educate their friends and family who immediately went all in on the propaganda.

Let’s start with the obvious:

The Syrian Military’s Progress and Position of Strength

A lot of people paying attention will recall the most significant victory of the Syrian Arab Army (SAA) that occurred near the end of last year: Aleppo. This was a major victory for the Syrian government but it was also followed by several less publicized important advances by the SAA in their fight against the Islamic State (IS), former al-Qaeda affiliate Jahbat al-Nusra, and a long list of other ‘rebel’ groups that had allied with these internationally recognized terrorist organizations.

One of these victories was the offensive launched by the SAA to retake the ancient city of Palmyra. This was another major operation where the SAA emerged victorious in reclaiming the city from IS and then maintaining control despite several counter-offensives by the jihadists that occurred alongside Israeli airstrikes.

Yet, even while facing opposition from both terrorists and hostile foreign governments the SAA didn’t resort to anything like the use of chemical weapons. These victories without chemical weapons have been the norm in Syria for over a year now, which makes the accusation that Assad would arbitrarily gas civilians questionable.

In fact, there have been no instances where the West had strong evidence of Assad using chemical weapons since the 2013 attack in the Ghouta suburb of Damascus which crossed former President Obama’s ‘red line.’ Despite an investigation into the Ghouta attack by the United Nations (UN), the accusation of Assad using chemical weapons was still never proven.

Of course, once the US makes an accusation like this, something ‘has to be done.’ At the time Obama had no support for any kind of intervention in Syria which leads us to our next point; the agreement reached between the US and Russia to destroy Assad’s chemical stockpiles.

In the opinion of many of those who were opposed to any kind US military response in Syria follow the allegations concerning Ghouta, Russia made a generous offer. With facilitation by Moscow, the international community would be allowed to send weapons inspectors to Syria to supervise the destruction of Assad’s chemical weapon stockpiles and the shuttering of facilities where they were produced.

Under this major diplomatic agreement, inspectors from the Organization for the Prohibition of Chemical Weapons (OPCW) went to Syria. The OPCW played the crucial role of impartial international observer to fulfill the obligation they were founded on – “to implement the provisions of the Chemical Weapons Convention (CWC).”

UN personnel along with the OPCW inspectors began issuing reports on Syria’s chemical weapons in October of 2013. According to both groups, the Syrian government was fully complying with the agreed on milestones and timeline for disarmament.

The only chemical agent that could be weaponized excluded from the agreement was chlorine, due to it’s many industrial uses. Other than that, Assad was fully compliant in destroying the chemical weapons and the tools to manufacture them in the areas controlled by his government. This was even acknowledged by the US State Department under John Kerry.

The important thing to take from that last paragraph is that Assad was compliant in the regions of Syria he controlled. By the end of 2013, Syria was already going into the third year of being consumed by the war that saw large swaths of territory – like Idlib – under the control of a range of groups from US backed “moderate opposition” to IS.

Chemical Weapons of the ‘Opposition’

This left literal tons of chemical weapons components inaccessible to inspectors and in the hands of whichever terror organizations got to them first.  This presumably includes facilities in Idlib, where many of the al Nusra affiliated “rebels” were sent, on buses provided by the Syrian government, during the liberation of Aleppo.

There is also the fact that in areas formerly held by terrorist organizations, the SAA and Russian soldiers have found components used in the manufacture of chemical weapons. Not all of this was left over from before the war either, with some of the stockpiles clearly labeled indicating they originated from the Gulf states like Saudi Arabia.

Another thing the rebels apparently took with them were their civilian supporters. Some of the same people who made many of the questionable claims concerning the “slaughter” in Aleppo are now also the sources of the eyewitness accounts in Idlib.

Many outlets have pointed out the reasons to be skeptical of the “neutral” White Helmets, a group that seems to end up operating wherever al Nusra is currently located. This was no different in Idlib where the first pictures of the chemical attack were full of some of the same White Helmets volunteers that can be seen in photos from Aleppo.

The White Helmets provided most of the first hand accounts directly following what they assure western media was a chemical attack. Yet there were is shady sources responsible for more of the ‘evidence’ used by the US after victims reached the local hospital.

In fact the doctor responsible for much of the footage released once the sarin victims reached the hospital was a man named Shajul Islam. Islam was officially designated a “committed jihadist” by the UK’s foreign intel service, MI6 in 2016.

Some of this evidence is also agreed on by some non-terror connected groups, like the Syrian Observatory for Human Rights (SOHR). But what western media won’t discuss in detail is that, generally speaking, these watchdogs are typically anti-Assad and the SOHR in particular is composed of one man located in England who hasn’t been to Syria in 15 years.

The last matter to address is the simple fact of the current geopolitical situation that this attack occurred in.

The Timing of a Chemical Attack by Assad

The most obvious question many have asked about these latest allegations against Assad has obviously been, why now?

Days before the accusations against the Syrian government, US Secretary of State Rex Tillerson told reporters that toppling Assad was no longer a priority. This sentiment was also repeated by the US ambassador to the UN, Nikki Haley, although she walked back that comment three days later and then led the charge in the Security Council against Assad last week.

Following this seeming change in position, both liberal and conservative US pundits and politicians claimed this was what sent a signal to Damascus that the use of chemical weapons would be tolerated. However, if we really think this position through though, it seems unlikely that Assad would risk his growing list of victories with a move he already knows would anger the global community.

Despite this long list of evidence the US still decided to violate international law and carry out Thursday’s unilateral strike. There was no impartial investigation beforehand, something that the Bolivian ambassador to the UN pointed out was incredibly similar to Colin Powell’s testimony in 2003 forcing the western allies to back a US war Iraq (he even brought out the infamous picture of Powell presenting a vial of “Saddam’s WMDs).

Now, four days later there are real questions the world is asking. Some high level US politicians have come out denouncing the failure to investigate and now even UN officials are poking holes in the west’s official story.

The situation with Syria is truly beginning to resemble that of the beating of war drums against Iraq in 2003. Let’s not let this become another war built on bad evidence that will inevitably result in even more deaths than Syria has already seen in the last 6 years.