On Wednesday, scientists in Demark published a “revolutionary” study that demonstrates mask-wearing does very little to mitigate the spread of COVID-19. By Friday, an Oxford University professor, citing the study in an article published on The Spectator, reported that he was flagged by Facebook for “false information” as he attempted to repost the article on the social media platform.

Before we begin, we want to remind readers that hours after the study’s publication in Annals of Internal Medicine, titled “Effectiveness of Adding a Mask Recommendation to Other Public Health Measures to Prevent SARS-CoV-2 Infection in Danish Mask Wearer,” we asked a straightforward question of how social media companies would respond to these new developments.

Well, that answer quickly appeared as director of the Center for Evidence-Based Medicine at Oxford University Carl Heneghan tweeted Friday that his article titled “Landmark Danish study finds no significant effect for facemask wearers,” citing the new study, was flagged as false information by Facebook.

“Here’s what happened when I posted our latest @spectator article to Facebook – I’m aware this is happening to others – what has happened to academic freedom and freedom of speech? There is nothing in this article that is ‘false.'” 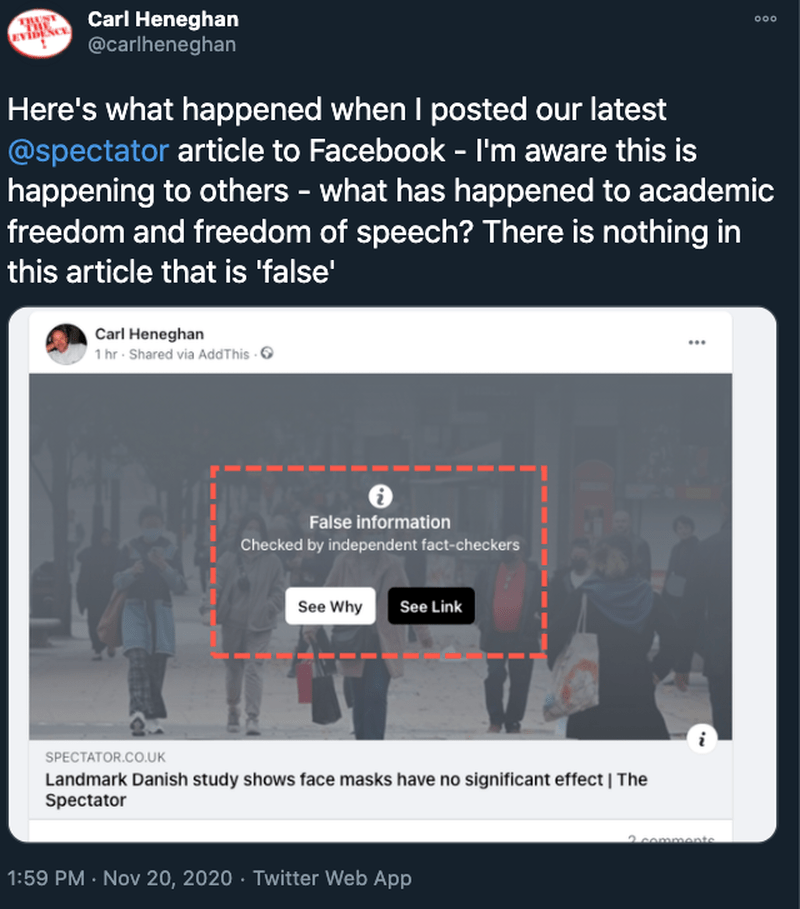 In the article, published in The Spectator, he spoke about the new study:

“Yesterday marked the publication of a long-delayed trial in Denmark which hopes to answer that very question. The ‘Damask-19 trial’ was conducted in the spring with over 6,000 participants, when the public were not being told to wear masks, but other public health measures were in place. Unlike other studies looking at masks, the Danmask study was a randomised controlled trial – making it the highest quality scientific evidence.”

“In the end, there was no statistically significant difference between those who wore masks and those who did not when it came to being infected by Covid-19. 1.8 per cent of those wearing masks caught Covid, compared to 2.1 per cent of the control group. As a result, it seems that any effect masks have on preventing the spread of the disease in the community is small.”

RT News points out Heneghan was also “under attack” by academic scholars, such as Thomas Conti of Brazil, who said the study was poorly designed – arguing that masks work.

For starters, it was not a "landmark study". It was severely underpowered. Early July @NoahHaber correctly predicted what the results would be. Bad study designs should not be presented as state-of-the-art or above previous known evidence.https://t.co/NNKAPnd2DQ

Besides the publication of the study and Heneghan, arguing about the ineffectiveness of masks, Iowa Gov. Kim Reynolds (a Republican) said there’s “science on both sides” of the mask debate. However, Reynolds still went ahead with imposing a new mask mandate in her state, along with other measures, as COVID-19 cases surge across the country, with the Midwest as the hardest-hit region.

“There’s science on both sides, and you know that,” Reynolds said, without providing details. “If you look, you can find whatever you want to support wherever you’re at.”

Most media outlets that reported on those remarks noted that the governor’s statement contradicted the official CDC guidelines. But it’s worth remembering that at one point or another, the FDA, the CDC, the Surgeon General, etc. have all suggested that masks do little to stop the spread of COVID-19. The CDC admitted that 80% of newly infected wore their masks following all restrictions.

The CDC recently released a new study purporting to show that masks protected both the wearer and the general public. Still, as the Danish researchers noted in their summary, the scientific links there actually aren’t at all well-established. The researchers even cautioned that their findings are hardly conclusive, and shouldn’t be relied upon by policymakers.

What’s clear is that Facebook moderators are not allowing for both sides of the mask debate to be heard.