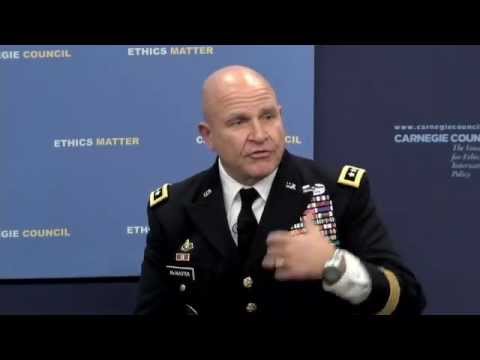 Trump added, “That combination is something very, very special.” Trump called McMaster a “a man of tremendous talent and tremendous experience.”

Gen. McMaster is a currently serving Army officer. He served in the Persian Gulf War and the wars in Afghanistan and Iraq, earning the nickname: “The Iconoclast General.”

As a career officer in the military, McMaster wrote a book heavily critical on the Vietnam War and the Lyndon Johnson administration in 1997 titled “Dereliction of Duty”.

In 2006 ,a CNN story labeled then-Col. McMaster a “rising star”, calling his book “the seminal work on military’s responsibility during Vietnam to confront their civilian bosses when strategy was not working.”

McMaster has also been very critical of the Iraq war, and the conduct of the fight against ISIS. In 2014 during an event for the Carnegie Council for Ethics in International Affairs, McMaster stated efforts to train Iraqi troops against ISIS failed as the strategies didn’t consider the politics of the region.

Gen. McMaster thanked President Trump kindly for the newly given position on Monday, adding: “I would just like to say what a privilege it is to be able to continue serving our nation and I’m grateful to you for that opportunity.”

“I look forward to joining the National Security team and doing everything I can to advance and protect the interest of the American people.”