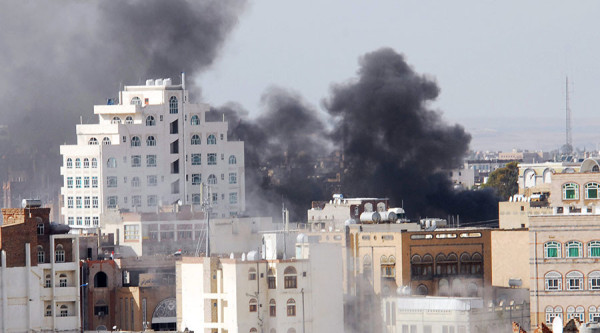 An airstrike by the Saudi-led coalition hit a hospital in central Yemen on Monday, a state news agency reported. The alleged incident comes a day after Medecins Sans Frontieres (MSF) said a missile killed four people at one of its clinics in the country.
The clinic which came under fire is in the Swadi district of Yemen’s southern Bayda province, according to Saba news agency.
The news agency is run by the Houthi movement, which seized the Yemeni capital Sana’a last year and is being targeted by the Saudi-led bombardment.

An official from the exiled Yemeni government in the southern port of Aden confirmed to Reuters that the clinic was hit.

However, he stressed that the facility, which according to the official was used by Houthi fighters as a base, was only damaged, and not destroyed.

Several Houthi militiamen were killed in the airstrike, the unnamed official added.

Medical facilities have come under fire on several occasions during the Yemeni conflict.

Five people were killed according to the NGO, which stressed it was not clear who was responsible for the attack.

Last week, a center for the blind in Sana’a was hit in an airstrike reportedly carried out by the Saudi-led coalition.

Read more
FILE PHOTO: A Houthi militant walks on the rubble of the Chamber of Trade and Industry headquarters after it was hit by a Saudi-led air strike in Yemen’s capital Sanaa January 5, 2016 © Khaled AbdullahYemen center for blind hit by Saudi-led coalition airstrike – locals
The coalition was also blamed for hitting a Medecins Sans Frontieres hospital in the Yemeni capital in December.

Human Rights Watch (HRW) has called for an international inquiry into the alleged use of cluster munitions by Saudi Arabian warplanes, describing the development as a war crime.

The Saudi-led coalition began its bombing campaign in Yemen in March 2014 to back the Sunni Muslim government toppled by the Shia Houthi rebels, whom Riyadh accuses of links with regional rival, Iran.

Around 6,000 have been killed since the start of the airstrikes, with most of the casualties being civilians.