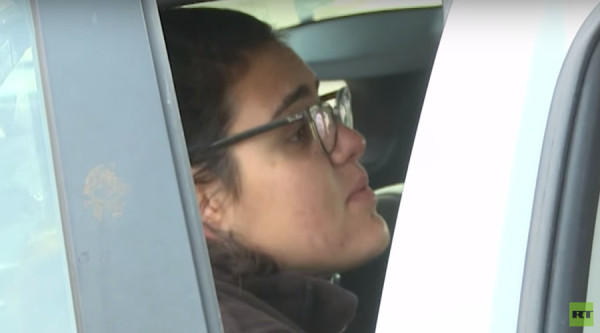 A 19-year-old Israeli woman, imprisoned for 20 days for refusing to serve in the army because of violence against Palestinians, has been set free, sparking a mixed reaction with some praising her courage and others labeling her a “traitor.”
The young woman will have to report to the induction base on Sunday, where she again would be required to serve in the army. Should she refuse, Kaminer will be put back behind bars for another month, RT’s Paula Slier reports.

“I think it is a stupid move by the government and the military authorities to force people to serve in contradiction to their beliefs. A girl declares that she has a conscience opposing the occupation and she wants to do an alternative service is being put in jail. That is just outrageous”, Kaminer’s father told RT.
Kaminer served a year of national service with the Israeli Scouts, where she volunteered with children who had suffered injuries in Israel’s Gaza wars. The experience prompted her to disobey Israeli’s orders of conscription.

“The children I worked with grew up in the heart of the conflict and have had extremely difficult experiences from a young age, experiences that caused them to feel hatred, which can be understood, especially when it comes from young children,” Kaminer wrote in her statement in the beginning of January.
“They convince us that the army has nothing to do with politics, but serving in the army is a political decision. Military jail frightens me less than our society losing its humanity,” the activist added.

“I realized I did not want to take part, nor to contribute to further hatred and fear, and not to take part in the occupation”, Kaminer said in a video posted on Facebook by the Jewish Voice for Peace.
While the woman has received an outpouring of support on social media, some have said that what she did was illegal and that her behavior might encourage others to follow her suit.
Avichai Shorshan, co-founder of “My Truth” told RT, “This is a democratic country and everyone has the right to be critical. But, there is a right way of doing things. What she did was illegal and if you try to legitimize it, that is encouraging unlawful behavior.”
Israeli PM Benjamin Netanyahu weighed in on the issue of conscientious objectors in September 2014 after 43 Israeli reservists signed a letter refusing orders in protest against IDF military actions in the West Bank and Gaza. He said at the time, “Refusing orders should be condemned and using it politically by voicing false accusations is not valid.”

Conscientious objectors are citizens of Israel who refuse to serve in the Israel Defense Forces on the grounds of religious and/or political beliefs, or disagreements with Israeli policy, such as the occupation of the Palestinian territories. Conscription is mandatory in Israel.