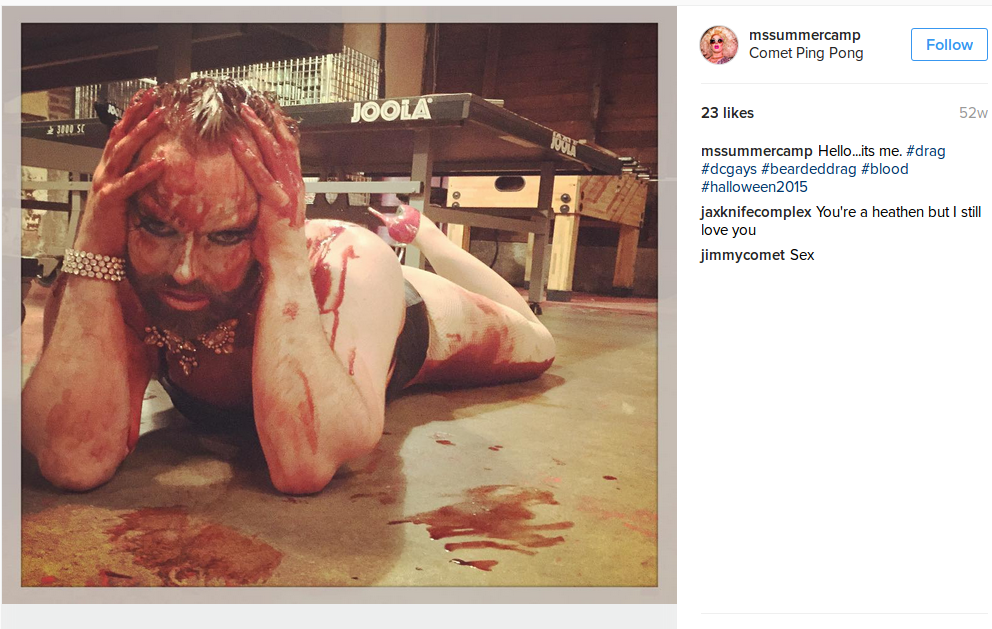 In a video uploaded to Youtube, Pizzagate researcher Ryan A. O’Neal alleges that James Alefantis threatened him and his family’s lives – and the evidence is breathtaking and creepy.

In the video above, O’Neal shows a series of messages with James Alefantis which purport to show threats made by the DC pizza shop owner. O’Neal has since filed a police report.

In the alleged messages Alefantis cryptically says, “Everything they say about me is true except I don’t like kids.”

O’Neal claims to have compelling evidence that the allegations of Alefantis’ involvement in a pedophile ring are true.

“We are ninety-nine percent sure where it is,” Ryan O’Neal stated in a recent video he uploaded entitled “Pegasus kill-room” seen below.

In the video, O’Neal identifies the now infamous “kill room,” which he says has a specific brick pattern. He then traces it back to an original post on the “jimmycomet” Instagram page (which has now been made private). Internet sleuths found that the exact room and brick wall match up to an image found on a “margotwork.com,” according to O’Neal.

He further claims Wills is “one of the guys who helped design Comet Ping Pong” and states that the building in question, containing the “kill room” is not Comet Ping Pong but is the “Pegasus Museum,” located at 3518 11th St. R NW. The museum is “completely surrounded by other buildings” and even a “playground,” O’Neal states in the video.

O’Neal attempts to connect the dots and prove that James Alefantis is also the C.E.O. of Castellum Achilles LLC.

Shepard Ambellas, writing for Intellihub, noted the connection between the LLC name and the ancient Latin for “a watchtower”.

He also noted that public records showed that the building had construction permits issued around the same time. Additionally, Ambelas added, “spray painting on the wall clearly says ‘kids’ with a down arrow.”

“This connection also demonstrates that Alefantis is not just a simple ‘pizza shop owner’ as he has claimed in the mainstream media on at least one occasion. Moreover, it is also important to point out that the definition of “castellum,” according to Wikipedia, is: “A castellum in ancient Latin is usually either: a small Roman fortlet or tower, a diminutive of castrum, often used as a watchtower or signal station e.g. on Hadrian’s Wall,” which is an interesting caveat with a cherry on top, if I may add.

The building itself and the property in which the Pegasus Museum is situated on are located in the “Columbia Heights” neighborhood. Assessed at a value $325,560, the museum is owned by Castellum Achilles LLC.

According to public records, the museum has previously had building permits issued for construction which seem to match up closely to a timeframe semi-consistent with photos that Alefantis himself posted on Instagram that show open trenches in what is believed by O’Neal to be the “Pegasus kill room.”

Strangely, it has also been discovered that within a close proximity of the Pegasus Museum several ominous markings, graffiti taggings, can be found. One of the tags, spray painted on a concrete wall, clearly says “kids” and has an arrow pointing downward,”Shepard Ambellas, wrote.

Prior to uploading his video, O’Neal reached out to conduct a user submitted interview with Alefantis. At first Alefantis denied his proposal, but reportedly responded very calm and collected.

The alleged conversation is below:

Alefantis began the conversation by saying, “Okay man you win.”

To which O’Neal responds with “interview?”

Alefantis then asks for O’Neal’s voat name. Which O’Neal responds with, “what do you need that for?”

Alefantis replies, “how do I know you have any cred?”

O’Neal then gives him his voat name “IsThisGameOfThrones”

Alefantis then points out that O’Neal’s Youtube account is different from his Voat name and asks a question about another user. “[Who is] hopingtohelp?” Alefantis asks, “Looks like a shill to me.”

Alefantis then says O’Neal’s first name, “I know Ryan he wanted me to tell you,”

This is when Alefantis takes a darker turn, “Is he your son, oh do you know his mom?” Alefantis asks.

“YOU,” Alefantis responds back in all caps.

Alefantis then says, “Call me you have ten seconds.” Followed by a 10 second countdown.

O’Neal then calls Alefantis alleging that Alefantis “flipped out” and threatened his family and his girlfriend; Yelling in a three-minute phone call which O’Neil did not provide proof of.

O’Neal alleges that Alefantis then told him to “Delete his Pegasus Museum video or he would die and his mom, girlfriend, and son would die and then that he would sue his dead body.”

The next part of the conversation took place over text messages directly to O’Neal’s phone which seem to confirm the earlier assertions that Alefantis threatened him as the harassment and threats continued.

“Just the pegasus shit, figure out how to do it – no waves,” Alefantis wrote.

O’Neal responds: “I am a super reasonable guy you don’t have to threaten me like that.”

Alefantis then replies, “You can keep your kill room shit about the rest of it fix this and we are reasonable” sending a picture of O’Neal and his mom. 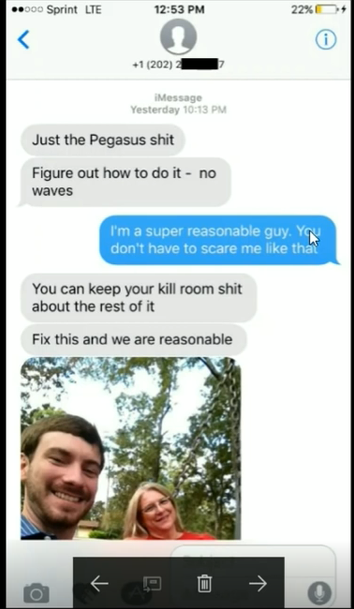 O’Neal: Not really. Just threatened to kill everybody.

Alefantis: No need for all of that.

O’Neal: Delete the thread on Voat too?

Alefantis: They are taking things down. I think be more creative. Say you think it’s nothing or something — it’s your culture. CAlm down and think about it first.

Alefantis: Let’s look and discuss. This might be ok. Thank you. Let me know when you have calmed a bit.

Alefantis: Ha. Welcome to my world. Call me quick I’ll be nice this time. I appreciate you taking down.

O’Neal: I’m riding around with somebody. Gimme a minute.

Alefantis then responds, “Cute” and sends a picture of O’Neal’s girlfriend. 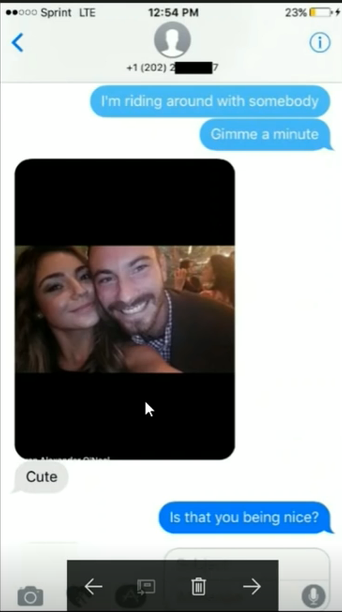 O’Neal responds back, “Is that you being nice?”

“Not yet. So call quick then I can go to bed with less worries,” Alefantis, says.

O’Neal then tells Alefantis that Mods deleted his posts on Voat.

O’Neal: “They deleted because my content was removed I guess. Reason: 1 2 3.”

Alefantis: “Looks like you are trying to make money off this.”

O’Neal then tells Alefantis that he is About to call him for a second time.

O’Neal called Alefantis back and said that “he was nicer” but that Alefantis still assured him “he would die” if he did not pull down the video and stay silent.

Alefantis then started more cryptic speech “Ok. One more thing this ‘happened to me.’ YOU — created this. You can uncreate.”

O’Neal responded, “It’s an interesting subject. Just doing research on a hobby basically. I would never want myself or family to have any harm done because of this.”

To which Alefantis replied, “Meaning — you created it for yourself — you can un-create. Yeah well it’s good you didn’t end up like Welch — in jail for 35 years. Or everyone who ‘s getting sued. You can find a much more profitable and beneficial hobby.”

O’Neal then states, “I mean nothing I did was wrong but wrong or not it’s just not worth it.”

Alefantis replies by saying, “Actually lots of what you did is illegal. And punishable. But it’s expensive to sue. So people don’t do it. I can explain it to you someday. There would also be criminal — state charges on some of it. But you would need someone smart enough and connected who wanted to make sure it was enforced. And so far you don’t have that.”

O’Neal responds, basically saying you win “I took down the video. You win by a landslide,” he says.

“So go to sleep. Thank you for that. It’s appreciated. And by the way this story is a pack of lies,” Alefantis responds.

O’Neal then asks Alefantis “What is it then? Pure garbage?”

Alefantis replies “Yup. I mean that wall is the same wall.”

“But what the hell does that mean.” Alefantis asks (referring to the wall) “And our families deserve to be safe,” he added.

“No doubt. What y’all building in the room? Why the trenches?” O’Neal asks.

” You are too much man. On the edge of total destruction — still curious?” Alefantis replies.

“I’m curious for myself. No worries.” O’Neal says reassuring Alefantis.

“FBI liked your videos. So there is something. And. PLUMBING. Have you ever run plumbing?” Alefantis responds.

“To build a room it’s not trenches. Any basic construction moron would see the difference next.” Alefantis responded.

“So the kill room stuff was just a joke?” O’Neal bravely asks. “IDK about that stuff,” speaking about the plumbing he adds.

Alefantis replies with an “Ugh.”

“That’s why people put shit on Instagram.” Alefantis says referring to if it was a joke.

“You never moved pipes I guess. You are a decorator,” Alefantis says sending him an old picture of one of his jobs.

“I designed a few bars. You like? You’re quite the designer.” O’Neal, responds.

Alefantis then makes yet another threat. “One more thing. If one of these assholes gets near my mom or her house that’s it for you. That’s bethesda fellows is driving over tomorrow. I’m sure nothing will happen but if it does.” he, says.

“They’ve been talking about Pegasus for awhile,” O’Neal replies back.

“Everything they say about me is true. Except I don’t like kids. At all. You should soon take all your shit down. Busted for profiteering.” Alefantis says.

O’Neal replies “Will do.”

“Goodnight. Take it down now or later?” O’Neal asks

To which O’Neal replies “heard,” (letting Alefantis know that he got the message.)

Alefantis then makes one final threat “And I don’t really want to hear about you again from anyone. Night Ryan. Cute gf”

While everyone is innocent until proven guilty, O’Neal has since uploaded another video that proves that the person he spoke to was indeed James Alefantis. Whether or not Alefantis is innocent and a victim of a viral hoax campaign doesn’t matter he just committed another crime – threatening O’Neal with murder.