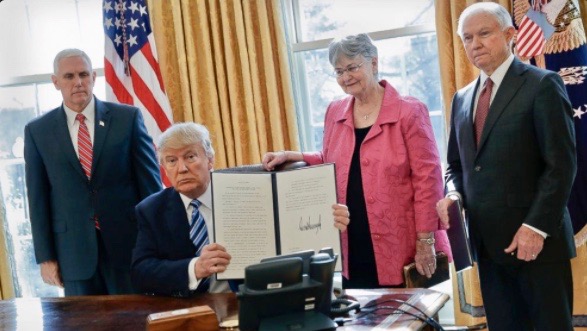 President Trump signed three executive orders on Thursday, all on the topics of crime against the police and against drug cartels. Trump issued the executive actions from the Oval Office as he stood alongside his newly confirmed Attorney General, Jeff Sessions.

According to Trump, one establishes a violent crime task force. Another aims to reduce violence against the police. The third order is designed to “break the back of the criminal cartels.”

“First, I’m directing Department of Justice and Homeland Security to undertake all necessary and lawful action to break the back of the criminal cartels that have spread across our nation and are destroying the blood of our youth and other people, many other people,” Trump said.

“Secondly, I’m directing Department of Justice to form a task force on reducing violent crime in America,” the president added.

“Today’s ceremony should be seen as a clear message to the gang members and drug dealers terrorizing innocent people, your day is over,” said Trump. “A new era of justice begins and it begins right now.”

The White House has not released the text of the executive orders yet.