The Space Weather Prediction Center (SWPC), a division of NOAA, said a strong geomagnetic storm (rated 3 out of 5) is expected to peak in the early morning hours of Thursday.

The eruptions on the sun originated Monday from a superactive sunspot called AR2975, expelling as many as 17 flares. SpaceWeather warns “at least two, possibly three, coronal mass ejections (CMEs)” are headed to Earth.

Now that is some action! AR2975 has produced 6 Mflares, 10+ Cflares, and two halo CMEs heading our way. An exciting couple of days and soon maybe here at Earth when the CMEs get here. Together they will be better. ?Get your aurora watching eyes ready! ?? pic.twitter.com/4QhXwkvMC4

When one CME slams into Earth’s magnetic field and another one follows, that’s known as a “cannibal CME” and can result in “tangled magnetic fields and compressed plasmas that can spark strong geomagnetic storms” according to SpaceWeather, meaning that the dazzling northern lights will be seen closer to the equator than usual.

“Because these two have merged together or are merging together, that’s often an indication that the CME will be a bit stronger. It’s more stuff coming.

“Also, it means that there’s a better chance that the magnetic field will disturb the Earth’s magnetic field,” said Alex Young, a solar astrophysicist at the NASA Goddard Space Flight Center.

Young said this CME activity was also accompanied by a “solar tsunami” (also known as an EIT wave, so named for its discovery using the EUV Imaging Telescope), a shock wave that typically indicates an energetic CME. Satellite data show the shock wave propagating across the sun. –WaPo 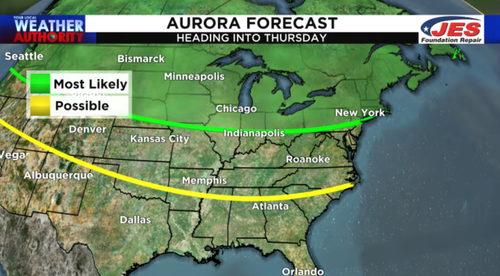 SWPC has warned of a “shortwave radio blackout over the Americas.” They pointed to a blackout map that engulfed much of the Eastern Hemisphere. 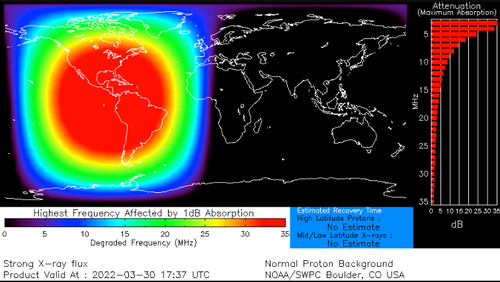 None of this should be surprising as Sunspot Cycle 25 has already begun and is expected to be an active one could be terrible news for the digital economy as disruptions sparked by geomagnetic storms create economic damage. Because it’s a “cannibal CME,” more potential energy could spark a rather powerful geomagnetic storm.

Last month, Elon Musk’s satellite internet service Starlink lost 40 satellites after a geomagnetic storm knocked them out of orbit. The question for Starlink customers is if they can still maintain a downlink during tonight’s storm.