Media Silent as Protests Continue to Rage in France 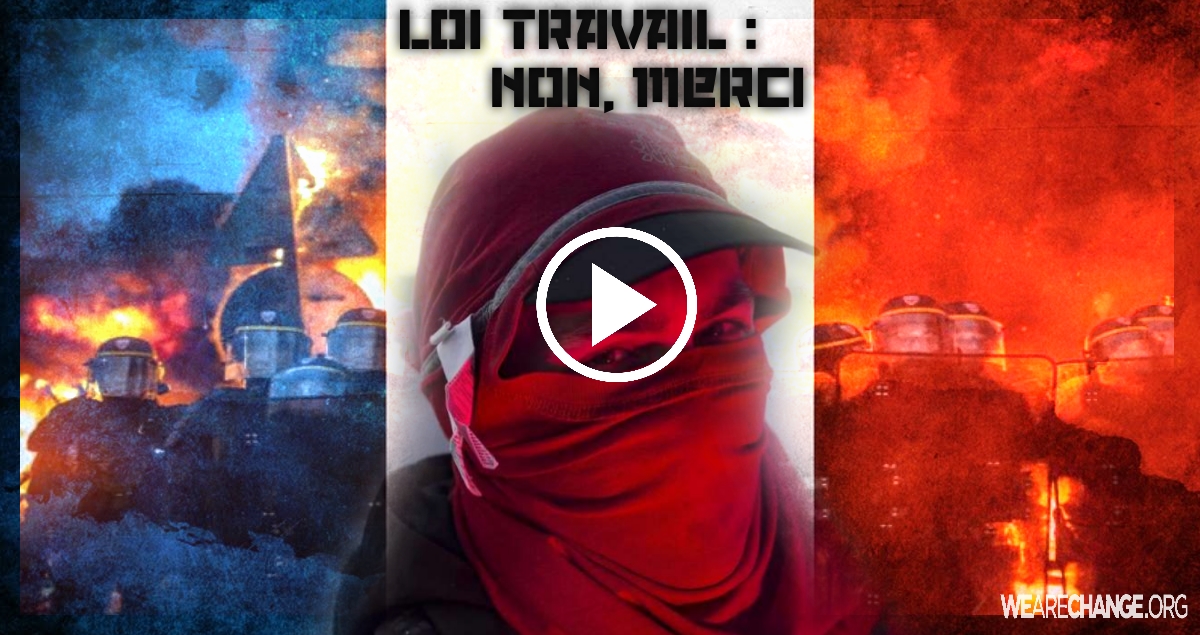 Thousands of people Protested In Paris Against Austerity March 2016.

The French Youth & Labor Party are Angry about an Increase in Weekly Work hours and a Raise in the Social Security Retirement age.

(ANONHQ) In France, labor strikes at oil refineries and nuclear power plants; fuel shortages paralyzing aviation and public transport system; violent street protests; nationwide riots; and a state of emergency until the end of July to cover the Tour de France has proved a major headache for François Hollande — currently the least popular French president since polls began in France. The protests are being called the largest and longest lasting since the French Revolution.

The first collaborative protest against the Socialist government since Hollande came to power in 2012, kicked off on 9 March. On March 31, nearly 400,000 people took to the streets, disagreeing with the sweeping changes to labor laws; though organizers put the number at 1.2 million.

On April 9, about 120,000 people marched in Paris and across France for a sixth time, protesting against contested labor reforms. Organizers called for yet another strike on April 28, and a massive protest on May 1, Labor Day.  Reports of police officers clashing with protesters, deploying tear gas in several French cities, and protesters burning vehicles, smashing windows flooded the Internet.

In his response, Interior Minister Bernard Cazeneuve said in the city of Lyon:

“I call on the organizers of these demonstrations to condemn with the same firmness that I do the unrest caused by these handful of thugs.”

Demanding a complete withdrawal of the draft reform bill, French workers stepped up protests, rallies and blockades in the third week of May. As per the latest updates, one in three gas stations across the country run dry, causing long queues at normally well-stocked stations. There are blockades at 5 of France’s 8 oil refineries. Nearly 1/5th of nuclear power output is cut by striking staff. Since the nation’s electricity supply has dropped, the government is forced to dig into its emergency reserves.

On May 26, more than 150,000 marched against the government’s plans to make it easier for firms to hire and fire.

“In the southwestern city of Bordeaux, about 100 people targeted a police station, throwing objects and damaging a police car. In Paris and in the western city of Nantes, bank windows were broken and protesters clashed with police. The next big day of protests is planned on June 14 [when French senators begin discussing the reform package], four days after the Euro 2016 soccer tournament opens in France. The CGT warned it could be disrupted if the government refuses to withdraw the draft reform bill.”

Loi traivail “The Labor Law’ is the reason for the Paris protests.

There is a great guy to follow Clement Gino. He makes great videos from Paris Protests. Check his twitter here

Although French Prime Minister Manuel Valls is willing to modify some of the proposals, workers’ unions are unwilling to back down. Particularly angry that the government is enacting a constitutional power to bypass parliament to pass the bill, several unions led by one of the country’s largest unions, the General Confederation of Labor (or the CGT),declared in an open letter:

“This week, the actions, the strikes and the blockades by workers from a number of industries to demand the retraction of this labor bill and to obtain new rights show that our determination remains intact.”

Plagued by dismal popularity ratings and high unemployment, President Hollande, who staked his whole term in office on improving life for the country’s struggling youth, says the labor reform is vital to tackle joblessness. Labor Minister Myrian El Khomri, too, defends the new labor law dubbed “the bosses law” by its opponents.

“This law corresponds to the situation in our country. We have an unemployment rate of over 10% the same as it was 20 years ago. It has improved over the last month, however that is not satisfactory. Our country created fewer jobs than other European countries [Between 2013 and 2015, 57,000 jobs were created in France, 482,000 in Germany, 651,000 in Spain and 288,000 in Italy.] So for me the text and the goal of this reform is to be able to just improve access to employment.”

However, opponents of the labor reform say it will threaten cherished rights and deepen job insecurity for young people by helping companies fire staff arbitrarily. Henry Samuel and Raziye Akkoc of The Telegraphobserved:

“The government believes it will create thousands of jobs but the IMF, and the French opposition say the reform doesn’t go nearly far enough to significantly reverse record unemployment, now at 10%, and soaring public debt, due to reach 98% of GDP next year.” This is the first time a Socialist French government has faced a nationwide trade union rebellion in more than 30 years. The left’s opposition to the reforms has been vast, threatening to tear apart Hollande’s own support base.

“The proposed reform has compounded the fury of many within the Socialist Party and the further left at what they see as the treacherous, rightward course of the Hollande-Valls government. The protests have been led by the former Socialist leader, and ‘mother’ of the 35-hour week, Martine Aubry, who has resigned from all her official positions within the party. Aubry complains that the rewriting of French employment law in line with ‘liberal’ pro-market dogma is a betrayal of the French ‘social contract.’”

An online petition against the proposed changes has gathered over 1 million signatures, a record in France. According to a recent Le Parisien poll, a majority of French people favor labor reforms, but 70% oppose the government’s way of going about it.

It will be a political suicide for Hollande if he rolls back the labor reform – he has promised he will not run for re-election next year unless he manages to stem the rise in unemployment. But as The Guardian rightly notes, it is not just Hollande’s political survival at stake, though, but the image of France itself.

This article (Media Silent as Biggest Protests Since French Revolution Sweep France) is free and open source. You have permission to republish this article under a Creative Commons license with attribution to Vandita and AnonHQ.com. Anti-Media Radio airs weeknights at 11pm Eastern/8pm Pacific. Image credit: NonOmnisMoriar. If you spot a typo, email edits@theantimedia.org.