The Murder You Never Heard Of Serena Shim 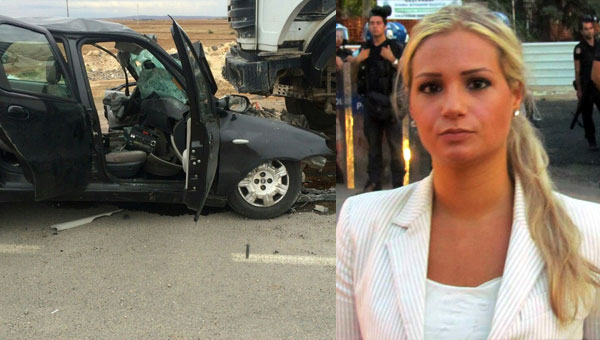 Serena Shim was an American journalist who worked for Press TV on the ground at every major war conflict. She was killed by the Turkish government, when she uncovered the smuggling of ISIS soldiers through the Turkish and Syrian border using NGO trucks. The Turkish MIT accused her of spying and 2 days later she was dead in an suspicious accident with a cement truck.

I talked recently with Serena Shim’s family. Her mother Judith Poe, her sister Fatemeh Shim, and her husband Abraham Shim.

They spoke of Serena Shim’s accomplishments and life, her career as a journalist as well as letting “Sassy” live on through others and their activism — whether that’s standing up for an oppressed country or some local change — stand up and make some change to the world and let Serena Shim’s legacy live on.

“She worked with PressTV in Lebanon just for the fact that they liked to let out real exposing news at the time that it was happening.”
~Fatemeh Shim, Serena Shim’s sister said.

I first asked Serena’s family to tell me about Serena Shim’s journalism and give a bit of a back story Judith responded saying.

“Journalism kind of fell into Sassy’s lap. Sassy was being groomed into being in the government and as you know Sassy was amazingly brilliant, way before her time and she realized quite frankly that government would not be the vehicle to be the voice and benefit of the people and journalism was her vehicle to do that and she did it.” – Judith Poe, Serena Shim’s mom said.

Serena’s family then told me that Sassy began looking into ISIS affiliated groups in Syria as far back as 2009, when ISIS was called FSA, Al-Nusra, Al-Qaeda, etc. In 2011, she got her claws involved in it. Then in 2012, even living in the camps for a while on the Turkish Syrian border in Kobanî with high ranking members of ISIS, she witnessed UN World Health Organization NGO Trucks used to smuggle members of ISIS and others who wanted to get into Syria for $500.

Serena’s little sister was even living in the tank houses with the soldiers.

At that time everything was being filtered coming out of Turkey, Judith told me. Serena then went into Istanbul in 2012 for a press conference with Turkey’s “President” Erdogan to expose this – where she had a face to face confrontation with Erdogan.

Serena Shim was kicked out of Turkey by Erdogan as he screamed for his guards to “get her out of Turkey and never let her return.”

She was then given a tip and duty called — to travel back to Turkey in October 2014 to cover the ISIL conflict. On her 29th Birthday, she left Ukraine and headed for Turkey. The Turkish government allowed her back — in a trap, according to Serena’s family, as she was then killed, reportedly in a suspicious “car accident” with a cement truck traveling the wrong way on a three way one way highway.

“She was allowed back in the country, and baited back in – it tells volumes to us, it should tell volumes to the world” ~Judith Poe, Serena Shims mom said.

One day prior to the accident, Serena said she was accused of spying to PressTV by Turkish Intelligence forces (MIT).

“I am very surprised at this accusation [of espionage]. I’ve even thought of actually approaching Turkish intelligence and — because I have nothing to hide — I’ve never done anything aside from my job and I’d like to make that apparent to them.
However, I am a bit worried because as you know, and as the viewers know, that Turkey has been labeled by Reporters Without Borders as the largest prison for journalists,” Shim said. “So I am a bit frightened about what they might use against me.” ~Serena Shim to PRESSTV, One day prior to being killed.

After her “accident” with a cement truck traveling the wrong way on the highway. Serena was taken to a secret military hospital that was 2 hours and 41 minutes away from the scene. A hospital that Erdogan’s daughter was the head of, which Serena Shim exposed prior in one of her investigations. The hospital was used for treating injured ISIS members.

Serena’s cousin Judy Irish was also present during the accident and was taken to another hospital that was only 15 minutes away. An obvious odd anomaly.

Another anomaly — during the interview, Judith said the rental car that Serena rented wasn’t in any of the photos that Turkey had shown of her. The five pictures were different. A shoddy job staged to look like an accident is what Judith called it in her article written for Fox News on her daughter’s death.

Fatemeh also added that it was a concern for her and the family that in such a technological country such as Turkey where surveillance is prevalent that for them to call this a “suspicious accident” that there was no video or photos of her sister being in the car was a clear sign of foul play.

“The information is clear enough for a blind man to see. Anyone who does a little studying on google it’s not something that you really have to dig to get information to make a decision.”
~Fatemeh Shim, Serena Shim’s sister.

Fatemeh then smuggled her sister’s body out illegally from Turkey to Lebanon and was refused her passport and wedding ring.h.

“Because it was coming out of Iran, I think that many nations and especially NATO, think that they can brush the assassination of Serena Shim under the rug. Sassy filmed them on her cell phone – that’s not going to happen.”
~Judith Poe, Serena Shims mom said.

Judith then asked me if I knew who the vice president of the NGOs was and who Jacky Sutton’s best friend was. She also said to look at the license plates on the cement truck that supposedly hit Sassy.

Judith then said in regards to her daughter’s final live five minute aired-interview, “How did she know when she said they think I’m back under the umbrella of Kobanî? We all know now it was a lot more then Kobani.”

Kobani is a a proxy war where they are fighting a conflict in a strategic area between Syria, Iraq and Turkey that is blacked out by the western mainstream media.

Fatemah Shim expressed concern that there was no reason for her sister to return to Kobani – a dangerous war torn area – after covering it the first time if she didn’t have critical information other then what was going on with the people there.

Judith then told me about the real last interview of Serena Shim – the one not aired to the public.

“If you listen to Serena Shim’s last interview not the Press TV interview, her last interview was never aired. She said ‘I interview all parties’ to a member of parliament in his home who openly strongly opposes Erdogan, who has never come forward. I have cell phone pictures,” said Judith.

I made the comment that he hasn’t come forward because he’s afraid of Erdogan as well.

Judith said she doesn’t know if he’s a traitor of the people, but said the Mayor of Suruç, a providence in Turkey supposedly where Serena was assassinated, was also killed, along with his son. “We don’t know this to be true but allegedly the Mayor was about to announce Serena Shim’s assassination bef0re he himself and his son were assassinated too.”

Judith ended saying, “If you even google Serena Shim’s name in Turkey they automatically come and get you.”

Turkey was caught lying several times to the family of Serena Shim, saying multiple different stories. First she died in the car crash, then she died 30 minutes later at the hospital from heart failure. First they couldn’t find the vehicle and the driver, two days later they found the vehicle and the driver every day coming out with different pictures.

“In March 15th 2014 there was supposed to be a trial when they miraculously found the driver of the cement truck – they threw us a bone to shut us up. Then the prosecutor disappeared and went off the radar. But that’s not going to shut us up.” Judith said.

Reporters at www.WTFrly.com made a compilation of the events leading up to Serena Shim’s death.

We need to bring this story to light from the darkness.

There needs to be justice for Serena Shim. Please support Serena Shim’s family and the Anonymous Operation #JusticeForSerena #OpSerenaShim. Luke has previously talked about the Murder of Serena Shim and summarized it pretty well.