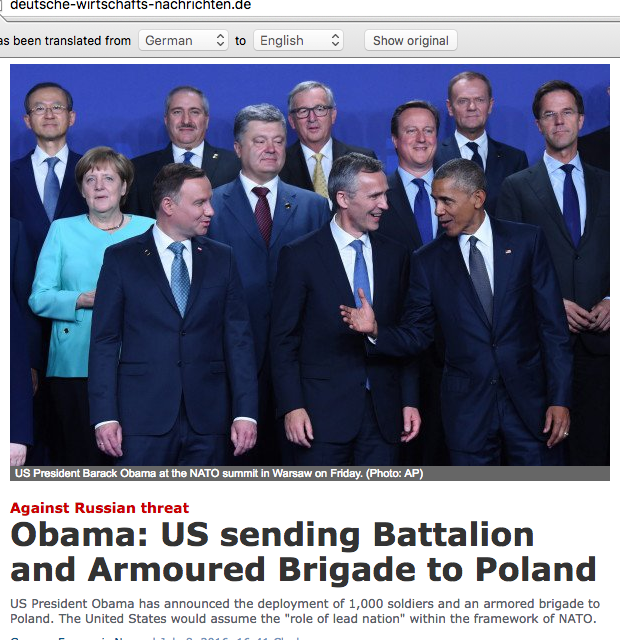 Eric Zuesse — The issues that were discussed at this year’s NATO Summit were mainly preparations for a possible war against Russia.

The two-day Summit in Warsaw Poland ended on Saturday July 9th, with a 139-part “Warsaw Summit Communiqué” which used the word “terrorism” 17 times, “jihad” and “jihadist” and “jihadism” 0 (zero) times, and “Russia” 58 times — never favorably, and often with overt hostility.

It also referred to “Ukraine” 34 times, and “Syria” 10 times. Ukraine, during a February 2014 coup (it has been referred to as having been a “coup” both by the leader of the private CIA firm Stratfor, and by the Establishment writer on international relations John Mearsheimer, among others) switched, immediately after the coup, from having been neutral between NATO and Russia, to being suddenly and consistently intensely hostile to Russia, and immediately applied to join NATO; Syria still remains strongly allied with Russia.

In other words: the Communiqué is 100% hostile toward Russia and its ally Syria, and is far more concerned about Russia than it is about terrorism — and not at all concerned about jihadism and jihadists.

The Communiqué is clear about “the crisis in and around Ukraine being, in current circumstances, the first topic on our agenda.” All of its references to that matter are based upon the assumption that this problem is due entirely to Russian “aggression” and that all violations of the Minsk agreements on the Ukrainian conflict are by the pro-Russian separatists, none of the violations are on the Ukrainian government side. The presumption is that the Ukrainian government side never commits aggression, and that the separatist side is never defending itself against Ukrainian aggression. The Communiqué says, regarding the Special Monitoring Mission that is overseeing implementation of the Minsk agreements: “Impediments to the SMM’s work, which continue to occur overwhelmingly in areas under the control of the Russian-backed militants, represent a violation of the Minsk Agreements and seriously hamper the monitoring function of the SMM.” The SMM operates in, and issues daily reports from, the separatist region (Donbass, consisting of two parts: Luhansk and Donetsk), and therefore it’s natural that almost all of those reports concern that region, not Ukraine. However, for example, the report dated 7 July 2016 does note that, “Civilians expressed their anger at continued shelling while other civilians expressed their frustration over water cuts. The SMM facilitated and monitored adherence to the ceasefire to enable repairs to essential infrastructure.” Though this report was, indeed, as NATO phrases the matter, “in areas under the control of the Russian-backed militants” (i.e., of people who live in the region that rejects the coup-imposed Ukrainian government), the “violation of the Minsk agreements” there consisted actually of shelling that was fired from the Ukrainian government forces, into “areas under the control of the Russian-backed militants.”

The Communiqué describes at some length the sharp increase in soldiers and weapons that NATO is pouring onto and near Russia’s borders, especially in Poland, Lithuania, Latvia, and Romania. The reason that’s given for this surrounding Russia with hostile forces is:

the ongoing illegal and illegitimate annexation of Crimea, which we do not and will not recognise and which we call on Russia to reverse; the violation of sovereign borders by force; the deliberate destabilisation of eastern Ukraine; large-scale snap exercises contrary to the spirit of the Vienna Document, and provocative military activities near NATO borders, including in the Baltic and Black Sea regions and the Eastern Mediterranean; its irresponsible and aggressive nuclear rhetoric, military concept and underlying posture; and its repeated violations of NATO Allied airspace. In addition, Russia’s military intervention, significant military presence and support for the regime in Syria, and its use of its military presence in the Black Sea to project power into the Eastern Mediterranean have posed further risks and challenges for the security of Allies and others.

No mention is made in the Communiqué of the event that sparked all of this, which was Washington’s Ukrainian coup, which Washington had been preparing starting no later than 1 March 2013 in its Ukrainian Embassy to overthrow the democratically elected President of Ukraine, Viktor Yanukovych.

When NATO demands, regarding Crimea’s return to Russia shortly after the coup, “we do not and will not recognise and … we call on Russia to reverse”; when NATO demands Russia to abandon the 90+% of Crimeans who wanted to rejoin as being part of Russia — when NATO demands Russia to consign these people to the now failed state of Ukraine (which hates them and wants them dead) — NATO is placing itself in the position of a continuing escalation toward nuclear war against Russia, unless NATO itself disbands or else cancels its demand. NATO is now in a position where they will either cancel their demand, or else continue their escalation and surrounding-of-Russia to the point where Russia will have no alternative but to unleash (without warning) all-out nuclear war against NATO countries, and against all nations, such as Ukraine, that hate Russians so much that they are trying to join NATO — the anti-Russia club of nations.

Russia is not going to do what NATO demands. The question now is: which side will start the nuclear war — attack first. In any case, the war (assuming that NATO neither retracts its demand nor disbands, and so war results) will probably be over within less than an hour. There won’t be any winners, but the side that strikes first will be destroyed less than will the side that merely retaliates. And, in that sense, there will be a ‘winner’, even to an all-out nuclear war. Regardless, though, Vladimir Putin’s responsibility is only to the Russian people, no matter how unacceptable the two choices are that NATO has offered him. He has tried many times to discuss the matter with Barack Obama, who always refuses to discuss it with him. Obama’s refusal speaks clearer than any mere words, either from him or from (his agent) NATO’s Supreme Allied Commander, possibly could.

Investigative historian Eric Zuesse is the author, most recently, of  They’re Not Even Close: The Democratic vs. Republican Economic Records, 1910-2010, and of  CHRIST’S VENTRILOQUISTS: The Event that Created Christianity.