Imperialist propaganda firm Bellingcat has published a response to the ever-expanding OPCW scandal, and it’s got to be seen to be believed.

Before we begin I should highlight that Bellingcat is funded by the National Endowment for Democracy, which according to its own cofounder was set up to do overtly what the CIA had previously been doing covertly, namely orchestrating narrative management geared toward the elimination of governments which refuse to comply with US interests. NED is funded directly by the US government, which means that Bellingcat is funded by the US government via an organization set up to promote imperialist regime change agendas. Bellingcat is also funded by Open Society Foundations, another imperialist narrative management operation.

Syria has been the target of what may be the most sophisticated propaganda campaign in history, and Bellingcat has been consistently rallying behind even the most transparently ridiculous tools of this campaign. This includes the notorious Bana Alabed psyop which at its height saw CNN staging a fake, scripted interview featuring a seven year-old girl assigning blame to Bashar al-Assad for an alleged sarin gas attack in Khan Shaykhun. Bellingcat’s stellar investigative work (which has been praised in fawning puff pieces by mainstream outlets like The Guardian and The New Yorker) concluded that this obvious propaganda construct was in fact nothing other than a little girl and her mother independently composing viral tweets, giving interviews and authoring books about how the Syrian government must be toppled via western interventionism.

Bellingcat’s latest phenomenal report on how you’re supposed to think about important geopolitical disputes, titled “Emails And Reading Comprehension: OPCW Douma Coverage Misses Crucial Facts”, addresses the leaked OPCW email which was recently published by WikiLeaks and various other outlets revealing that the OPCW omitted crucial information from its Douma report which indicated that a chemical weapons attack was unlikely to have occurred. I encourage you to go and check out Bellingcat’s new masterpiece for yourself. Don’t worry about giving them clicks; that’s not where they get their money.

The first thing you’ll notice about Bellingcat’s article is that at no point does it even attempt to address the actual inflammatory comments within it, such as the OPCW whistleblower’s assertion that the samples tested where a chlorine gas attack is alleged to have occurred in April 2018 contained levels of chlorinated organic compounds which were so low that it would be unreasonable to claim with any confidence that a chlorine gas attack had occurred at all. The whistleblower writes in the leaked email to the OPCW cabinet chief that the levels “were, in most cases, present only in parts per billion range, as low as 1–2 ppb, which is essentially trace quantities.”

As we discussed previously, early skeptics of the establishment Douma narrative highlighted the bizarre fact that when the OPCW published its Interim Report in July of last year its report contained no information about the levels at which the chlorinated organic chemicals occurred. Chlorinated organic chemicals occur at trace levels in any industrialized area, so they are only indicative of a chlorine gas attack when samples test at high levels. The email said they didn’t. The OPCW omitted this in both its Interim and Final Reports.

The whistleblower told journalist Jonathan Steele that the levels found “were comparable to and even lower than those given in the World Health Organisation’s guidelines on recommended permitted levels of trichlorophenol and other COCs in drinking water.”

“Had they been included, the public would have seen that the levels of COCs found were no higher than you would expect in any household environment”, the whistleblower said.

In a new Fox News interview with Tucker Carlson, Steele explained the significance of this revelation.

“The main point is that Chlorine gas degrades rapidly in the air,” Steele said. “So coming in two weeks later, you wouldn’t find anything. What you would find is that the gas contaminates or affects other chemicals in the natural environment. So-called ‘chlorinated organic chemicals.’ The difficulty is they exist anyway in the natural environment and water. So the crucial thing is the levels, were there higher levels of chlorinated organic chemicals found after the alleged gas attack than there would have been in the normal environment?”

“When they got back to the Netherlands, to The Hague where the OPCW has its headquarters, samples were sent off to designated laboratories, then there was a weird silence developed,” Steele continued. “Nobody told the inspectors what the results of the analysis was. It was only by chance that the inspector found out through accident earlier the results would come in and there were no differences at all. There were no higher levels of Chlorinated organic chemicals in the areas where the alleged attack had happened where there is some suspicious cylinders had been found by opposition activists. So it didn’t seem possible that there could have been a gas attack because the levels were just the same as in the natural environment.”

Bellingcat simply ignores this absolutely central aspect of the email, as well as the whistleblower’s point about the symptoms of victims not matching chlorine gas poisoning.

“In this case the confidence in the identity of chlorine or any choking agent is drawn into question precisely because of the inconsistency with the reported and observed symptoms,” the whistleblower writes in the email. “The inconsistency was not only noted by the FFM team but strongly noted by three toxicologists with expertise in exposure to CW [Chemical Weapons] agents.”

Bellingcat completely ignores all of these points, which are literally the only reason any of this is in the news at all, instead opting to make silly, pedantic arguments that the text of the email and the Interim and Final Reports indicate that some of the whistleblower’s concerns appear to have been partially addressed by OPCW leadership in its publications. To make this argument, Bellingcat highlights how some of the wording in the reports was changed to appear a bit less conclusive, such as changing “likely” to “possible” and changing “reactive chlorine containing chemical” to “chemical containing reactive chlorine”.

By highlighting these barely-significant changes Bellingcat attempts to spin the narrative that there was no internal OPCW coverup of its investigators’ findings at all, which is of course invalidated by the fact that its Final Report concluded that a chlorine gas attack had taken place despite the whistleblower clearly stating that there is no basis upon which to conclude this. It’s also obviously invalidated by the fact that not one but two whistleblowers have come forward, meaning they plainly do not feel as though their concerns were met.

“Ian and I wanted to have this issue investigated and hopefully resolved internally, rather than exposing the failings of the Organisation in public, so we exhausted every internal avenue possible including submission of all the evidence of irregular behaviour to the Office of Internal Oversight,” the whistleblower told Steele. “The request for an internal investigation was refused and every other attempt to raise our concerns was stone walled. Our failed efforts to get management to listen went on over a period of nearly nine months. It was only after we realised the internal route was impossible that we decided to go public”.

“Ian” is Ian Henderson, the OPCW ballistics expert whose Engineering Assessment was leaked this past May. Henderson concluded that, contrary to what the OPCW’s Final Report strongly implies, the cylinders found at the scene in Douma were more likely to have been manually placed there, i.e. staged. The anonymous whistleblower informed Steele that all but one of the OPCW’s investigative team agreed with Henderson’s assessment. This too was left out of all OPCW reports, and Bellingcat’s piece completely ignores it, instead writing only that “Three independent analyses by experts in three different countries were carried out, and all reached complimentary conclusions: the damage at the impact sites is consistent with the cylinders having fallen from height.”

With the temerity only an NED paycheck can get you, Bellingcat argues that this vapid pedantry which has no bearing on the actual story whatsoever completely invalidates all reporting on the OPCW scandal.

“Although this letter appears to be at least superficially damaging to the OPCW, after reading the actual reports published by the OPCW it is clear that this letter is outdated and inapplicable to the final Douma report,” Bellingcat concludes. “If the people covering this story had actually taken the time to read the letter and the FFM reports, they may well have chosen to publicize it in a very different manner.”

Google has helpfully made sure to place Bellincat’s assertive-sounding gibberish at the very top of news results which come up if you do a search for “OPCW” today: 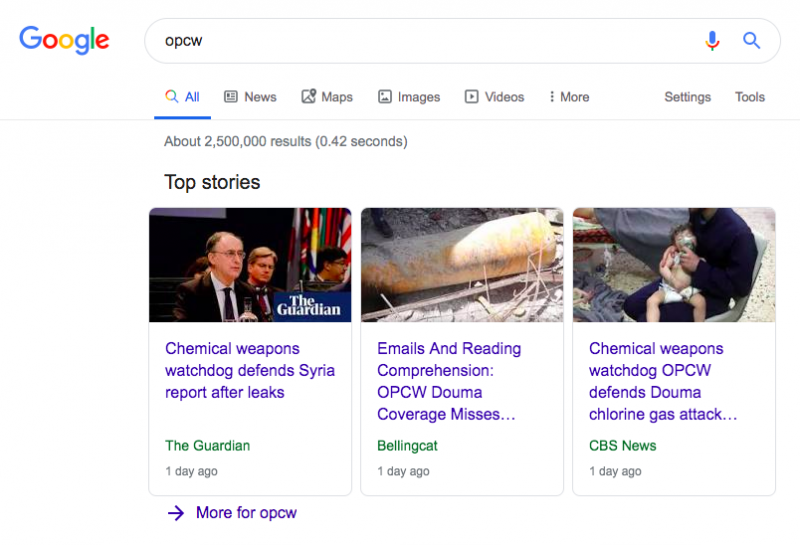 Empire apologists have taken this ridiculous, nonsensical line of argumentation as gospel and run with it on social media, sharing Bellingcat’s embarrassing faceplant with triumphant, chest-thumping captions.

“Just so all my followers are clear, Tucker Carlson and the merry band of alt left grifter idiots trying to convince you that 1 of the 257 chemical attacks in Syria was a false flag are wrong, again, and never even bothered to read the report they say is wrong,” tweeted Newshour’s Danny Gold.

“So the letter written by the dissenting OPCW employee on Douma investigation was sent two weeks before the interim report was released and nine months before the final one. In the final one, the employee’s concerns were addressed. Where’s the cover up?” tweeted Telegraph’s Josie Ensor.

“WikiLeaks et al are lying to you in defence of the Assad regime,” tweeted odious Syria narrative manager Oz Katerji.

Just so all my followers are clear, Tucker Carlson and the merry band of alt left grifter idiots trying to convince you that 1 of the 257 chemical attacks in Syria was a false flag are wrong, again, and never even bothered to read the report they say is wrong https://t.co/IRJQzC0VaL

Media Matters For America, another narrative management firm founded by troll army commander David Brock, has also picked up Bellingcat’s ridiculous arguments and run with them in an even dumber article titled “Tucker Carlson spreads disinformation about a deadly chemical attack in Syria”.

“Despite the seemingly scandalous accusation in the leak, Carlson is misrepresenting the nature of the WikiLeaks documents and their significance,” MMFA claims. “Investigative journalists at Bellingcat found that the leaked letter was in fact referring to an ‘interim report’ issued in July of 2018, before the OPCW released its final conclusions. A side-by-side comparison shows that the concerns addressed in the letter ‘are present, or else are in modified form, in the final report.’”

Which is of course false, as explained above.

MMFA’s other claims are nothing other than simple regurgitation of the very reports that are now being invalidated by the leaks that Tucker Carlson highlighted on his show. Their entire argument boils down to “This old information is in contradiction to that new information,” which is of course the entire bloody point.

“These claims contradict and misrepresent the available evidence regarding the attack, the conclusions of multiple governments, and they are based on a Syrian and Russian misinformation campaign seeking to discredit investigators and absolve Assad of responsibility for the atrocity,” MMFA argues, linking to a 2018 BBC article saying Assad was responsible for the Douma incident, a 2018 Guardian article about the US government’s unsubstantiated claim to have secret proof of Assad’s guilt, and a 2018 Guardian article claiming that Russia is wrong about its skepticism of the western Douma narrative, respectfully.

Which is the same as saying “You’re wrong because we disagree with you. Here is evidence of our disagreeing with you last year.”

This is the best the spin masters can do, and the OPCW scandal is only going to unfold more. Should be fun.