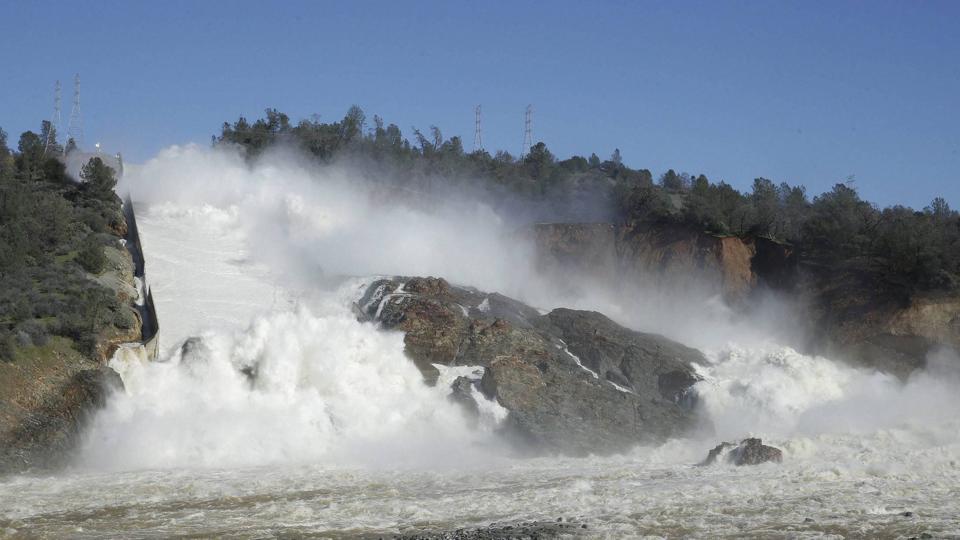 Nearly 200,000 people evacuated from their homes in Northern California on Sunday after warnings of structural failure within the Oroville Dam. But it’s not just California—America’s infrastructure is crumbling all across the country. While these dams are meant to provide safety and security to residents, with lack of maintenance they become a disaster just waiting to happen.

In the case of the Oroville Dam, the state ignored warnings for 12 years to fix the emergency spillway rather than to continue patching it with sandbags and stones. The crisis seems to be averted now, but this highlights the bigger problem, and that’s repairing these dams to prevent a scenario like this, and there are many of them.

Wth over 87,000 dams across the country, the Federal Emergency Management Agency (FEMA) has classified about 14,000 of those dams as “high hazard potential“.

The average age of many dams is 52 years according to the American Society of Civil Engineers’ 2013 Report Card for America’s Infrastructure.

That is 14,000 dams that need to be fixed or, if left alone, could cause another situation like what happened in Katrina.

In Boston alone there are 100 major dams that need to be repaired, some which pose a “significant threat to public safety’’ a state auditor said in 2011.

Besides Katrina, there have been hundreds of other deadly dam failures in history, RT reported just seven of America’s worst accidents.

March, 2006: Seven people died in Kauai, Hawaii when the Ka Loko Reservoir Dam burst, unleashing 400 million gallons of water onto the island. The dam’s poor maintenance, lack of inspection, and illegal modifications were blamed for its failure.

November, 1977: 39 people were killed when the Kelly Barnes Dam failed in Stephens County, Georgia after heavy rainfall. A combination of factors including erosion and landslides were blamed for the failure, which caused $2.8 million in damage, and the dam was never rebuilt.

July, 1977: The most infamous US dam disaster in recent memory killed 86 people in Johnstown, Pennsylvania when heavy rainfall and flooding resulted in six area dams failing. This was the second dam failure to hit Johnstown – 2,209 were killed after a flood in 1889.

June, 1976: The Teton Dam released 300,000 acre-feet of water when it failed abruptly in Northeast Idaho, killing 11 people and causing more than $1 billion of damage.

June, 1964: The worst flood in Montana’s history killed 28 people after the Swift Dam and two lower dams failed, releasing around 46,000 acre-feet of water.

March, 1963: Six people died and more than $6 million in damage was caused followed the Spaulding Pond Dam failure in Mohegan Park, Norwich, Connecticut. A lack of proper hydrologic design, poor maintenance and a lack of understanding regarding the potential impacts of a dam failure on the town were cited as causes for the disaster.

July, 1977: The most infamous US dam disaster in recent memory killed 86 people in Johnstown, Pennsylvania when heavy rainfall and flooding resulted in six area dams failing. This was the second dam failure to hit Johnstown – 2,209 were killed after a flood in 1889.

Dec, 1963: Five people were killed and 27 injured in Los Angeles after the Baldwin Hills Reservoir suffered a serious leak through its east abutment, breaching the dam and releasing a total of 250 million gallons of water.

No one knows the true number of dam failures that have occurred in the U.S, but according to the Association Of Dam Safety Officials from “Jan. 1, 2005 through June 2013, state dam safety programs reported 173 dam failures and 587 incidents that, without intervention, would likely have resulted in dam failure.”

According to Business insider, the main problem is that the government only owns 4% of the country’s dams; 69% are privately owned.

An additional problem is that only $9.1 million dollars was allocated in the year of 2016 to fix the nation’s dams, which Rebeca Harrington, a reporter for Business insider, noted is only the beginning of our dam problems.

“The National Dam Safety Program is tasked with overseeing dam upgrades and distributing the money to do so. The program expired in 2011, with Congress having reauthorized it in 2014. The $9.1 million they allocated for the program so far for the fiscal year 2016 will only begin to pay for the repairs the nation’s dams need,” Harrington wrote.

The worst risk comes from what are known as tailing dams which store mining waste or the sludge left behind when a mill separates metals from ore;  these threaten the environment and citizens of a surrounding area because of the metallics that can seep into the water and soil.

In 2016, Brazil’s Samarco dam collapsed killing 19 people, destroying villages, leaving hundreds homeless,  killing wildlife, and permanently damaging the environment and the Doce River, tainting it with 50 million tons of iron ore and toxic waste, according to the United Nations.

So how often do tailing dams fail? A lot more often then you think; an extensive 2001 study by the International Commission of Large Dams and the United Nations Environmental Program found that, on average, one major tailings dam incident occurs each year across the world, although that figure doubled between 1995 to 2001 PBS reported.

While dams are a great renewable energy resource and a good way to store waste they also threaten millions of Americans if they go bust and to put it simply, we need to fix our damn dams to prevent a potential looming crisis.