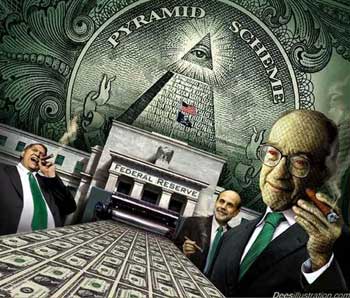 Some bankers are envisioning this scenario, and their solution is abolishing cash altogether and pressing the reset button as WEF founder Klaus Schwab said at the global financial elite Davos conference in 2014.

Behind the scenes, the central banks are in panic mode – rampant money printing (“quantitative easing”) has flooded the world with U.S. dollars, and they have no more ammunition left to deal with another looming financial crisis.

Bankers themselves are panicking as well. One anonymous major investment banker told CNBC that banks were preparing for a nuclear winter event.

There is another plan that many may have not noticed. For years, the internet has been abuzz with information that the U.S. dollar has been in deep discussion to be replaced as the world’s reserve currency. Many experts try and put a date on when this will happen and many dates have come and gone, but the reality is that this plan does exist.

What a lot of online gurus don’t realize is that a date can’t be put on when this plan would happen. But the how is already well documented. The IMF is planning to replace the U.S. dollar as the world’s reserve currency with the Yuan and the U.S. Dollar itself with it’s SDR (Special Drawing Rights). This plan has been known for years, as far back as 2011 when the IMF publicly stated it wanted to replace the U.S. Dollar. This was also relayed to me by a source.

China and Russia said we needed to replace the U.S. dollar as the world’s reserve currency in 2012-2014. Various financial deals were made with the BRICs nations between 2013-2016 to make this coming shift possible. The $100 billion dollar backed BRIC’s bank is, as of September 2015, fully operational.

Various incidents have happened, including explosions, plane crashes, train crashes, and fires surrounding big financial moves made against the petro-dollar.

Texas Creates Bank to Rival Fed:http://t.co/GpZvi4LSfE
China approves Ruble instead of USD:https://t.co/ayZuR8WcxB
Both have "Explosions."

Wondering why Russia has had a Downed plane, Cargo Jet & an Advisor to Putin Murdered?:https://t.co/f7fw8pE3pM
&https://t.co/UBHhG50Cl1

THE FINANCIAL MOVES & TERRORISM AGAINST BRICS:

The first likely financial-related terrorism attacks were when the BRICS bank was first announced in July 2014. Following the announcement a train derailed in Russia and a  bridge collapsed in Brazil.

The second coincidence was with China set to extend forward and swap trading to three currencies including Malaysia’s ringgit, Russia’s ruble, and the New Zealand dollar on December 29th, 2014. This followed with Air Asia’s plane QZ8501 crashing one day prior to the deal on December 28th.

France, Germany and Italy joined the China-led $50bn AIIB infrastructure bank a few weeks later, and then a GERMAN plane CRASHED in the FRENCH ALPS in 2015.

Then the BRICS bank opened up and commenced business July 2015. This followed with the BRICS monetary fund – $100 billion dollar AIIB being opened up for business September 2015. Additionally China dumped $180 billion dollars of U.S. government bonds.

Next we had the week of explosions in China’s new financial district Tianjin one month later in August 2015, as well as a oil spill fire in Moscow’s Moskva River that happened around the same time. This followed financial moves made by China and Russia to further isolate the U.S. dollar when China approved usage of the ruble instead of the U.S. dollar for it’s border city and dumped $180 billion dollars of U.S. bonds.

Another explosion in Texas last June had strange timing. In Texas, which has increasingly expressed desire of seceding from the U.S., gold depository was created to rival Fort Knox and the Federal Reserve Bank of New York. This followed with an explosion at a chemical factory in Texas.

After these attacks we witnessed Wall Street’s stocks plummet a historic 2,000+ points in two days and it seemed like we were heading for a full Global Economic Collapse in August – September 2015.

After this, things went silent and nothing further occurred after the U.S. agreed to support China’s Renminbi reserve currency bid in September following these odd explosions in China’s new financial district from August. Another incident occurred in a financial district in September, this time in Russia, when Moscow’s City International Business center caught fire.

Since all this, Moscow and China’s Shanghai stock exchanges are now linked and Russia is planning to issue yuan bonds worth $1 billion. After this was announced, Putin’s advisor Mikhail Lesin was found dead in a hotel room,  beaten to death. During the same week a Russian cargo plane and passenger jet both crashed.

Now recently, Poland issued government debt into China’s mainland bond market, with a large bond of 3 billion yuan ($452 million U.S. dollars). This marks a historic milestone for the Renminbi growing internationally. Poland is also the first EU country to issue RMB debt. This is huge and furthers the Renminbi goal of being the new world reserve currency.
Following this financial move, there was a car bomb attack at a Chinese embassy in Bishkek, Kyrgyzstan mere days later.

The next step in creating a new reserve currency is strengthening your currency for world reserve status backing it by gold or another form of value. This too is already done, as China rolled out it’s gold exchange market earlier in the year. Also, according to Jim Rickards, an ex-CIA economist, discussions secretly took place dubbed the “Shanghai Accord” with central banking officials and the IMF, Fed, etc.,  to KILL THE U.S. DOLLAR AND REPLACE IT WITH IMF’S SDR (Special Drawing Rights). The Shanghai Accord resembles the Plaza Accord of 1985, when the world’s major governments met to intervene and strengthen the yen and weaken the dollar.