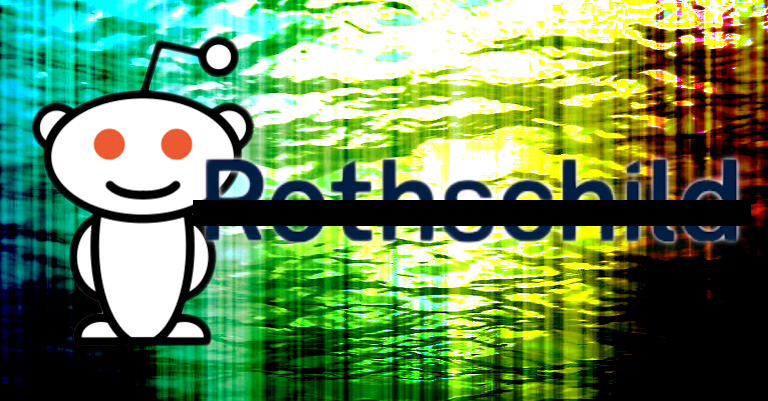 Reddit has now been caught in a love affair with Rothschild, censoring users from posting about the infamous family name; Reddit will now automatically remove your post if you type the name “Rothschild.”

Users on pro-Trump Subreddit r/the_donald began noticing censorship several days ago after a hilarious tweet from Lynn de Rothschild on February 21st, 2017 where Lynn attacked John Podesta for his work managing Hillary Clinton’s 2016 presidential election campaign. Lynn called Podesta “pathetic and a loser” blaming him for Hillary’s loss and accusing him of running “an out of touch campaign.”

@johnpodesta this is pathetic;HRC lost because you ran an arrogant out of touch campaign;you have destroyed a great family and are a loser https://t.co/iHLnQTilhj

“A sample post referencing the term was immediately archived after submission. Despite being just posted the archive revealed that a filter on Reddit had removed the text of the post and hidden it from the “new” section of r/the_donald. The original post and the text can be seen below” they wrote.

“When the account which made the post is logged in, the original text still appears in the body as if the post was not censored. This means that a user might not immediately notice that their posting had been removed,” Disobedient Media wrote.

Essentially what they did is shadow ban the name “Rothschild” so you see it but others don’t.

I conducted an independent test, setup a brand new account “WRCTestBotDumby” and well here is the result below as you can see once again “Rothschild” was censored confirming the test done by Disobedient Media. (Yes I am aware I spelled dummy wrong, and it was done on purpose to express how dumb this is and maybe to make this go viral. 🙂

So what exactly was my post? I posted a very informative question that is probably on everyone’s mind right now:

Baron Rothschild must face a trial he was indicted by the French government after he was accused of fraud in a scheme where Baron embezzled large sums of money from British pensioners last year a Judge Javier Gómez Bermudez ordered local police to find him and arrest him.

In addition to that, the French government is now probing Edmond de Rothschild’s entire Swiss branch of the banking empire. An investigation that I have been told could take until 2018 or could be wrapped up later this year. The French authorities may want to use ICIJ leaks to search for Rothschild and also may want to consider probing the Rothschild trust company in Reno, Nev., Rothschild & Co.

RT already reported that HSBC, Coutts & Rothschild helped the 1% evade taxes, according to the #PanamaPapers leak which seemed to be a controlled leak.

Another fun fact in 2015 Baron Rothschild was found guilty and fined by the U.S. Justice Department for aiding one percenter Americans helping them conceal their assets through tax dodging.

Historically a Rothschild in the past Nathan Rothschild was involved in “insider trading,” another form of fraud during the Napolean war and Battle of Waterloo so fraud must run in the Rothschild family, after all, they do own the central banks the biggest fraud of them all.

“During the Battle of Waterloo in the Napoleonic wars, Nathan Rothschild was responsible for one of the oldest cases of “insider trading,” which led to the Rothschild family robbing a whole nation blind. In 1815 when the battle of Waterloo took place, there were no quick methods of communication like we have today so messengers were used for communication in times of war. The Rothschild’s took advantage of this by having spies on the frontlines of the battle who would return information to the family faster than the messengers used by the military.

When the British won the war, Nathan Rothschild, was of course, the first to know, and he immediately went to the stock exchange and started selling stocks while putting out the rumor that the French had won the war. This created a panic on the floor of the stock exchange and investors all over England began frantically selling their stocks. With the price of all stocks plummeting Rothschild was able to buy out the whole English market for a fraction of its cost. When word returned that the English had actually been victorious, the value of the market soared, and overnight Nathan Rothschild expanded his family’s wealth, and cemented their position as one of the richest families in the world,” Matt Agorist wrote writing for the Free Thought Project.

Appearing on the French television show, Le Grand Journal, Jean-Claude Van Damme showed the world that even he is aware of the control and power of the Rothschild and Rockefeller families. Van Damme was invited on the French show to speak about the 2016 U.S. election and comment on Donald Trump, Ted Cruz and Vladimir Putin.

However, he quickly hijacked the narrative and went on to explain how the Rothschild and Rockefeller families control the politicians and run the world from behind the scenes so it doesn’t matter.

What do you think about Reddit shadow banning the name “Rothschild” out of the discussion online do you think Reddit has some form of Rothschild funding? Let us know in the comment section below!