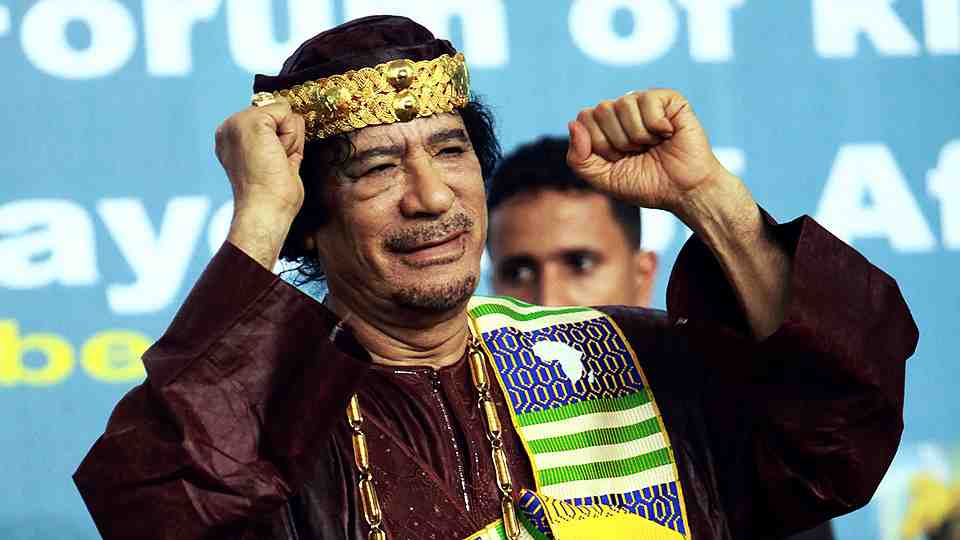 NEW YORK (WeAreChange) — WeAreChange has just discovered that the U.S. State Department has deleted an incriminating email from Hillary Clinton’s controversial private server revealing that as Secretary of State, she played a huge role in Libyan revolutionary Muammar Gaddafi’s assassination.

As ForeignPolicyJournal.com reports, Libya’s plan to create a gold-backed currency to compete with the euro and dollar was a key motive for NATO’s intervention which ultimately led to Gaddafi’s dethronement and death.

The New Year’s Eve release of over 3,000 new Hillary Clinton emails from the State Department has CNN abuzz over gossipy text messages, the “who gets to ride with Hillary” selection process set up by her staff, and how a “cute” Hillary photo fared on Facebook.

But historians of the 2011 NATO war in Libya will be sure to notice a few of the truly explosive confirmations contained in the new emails: admissions of rebel war crimes, special ops trainers inside Libya from nearly the start of protests, Al Qaeda embedded in the U.S. backed opposition, Western nations jockeying for access to Libyan oil, the nefarious origins of the absurd Viagra mass rape claim, and concern over Gaddafi’s gold and silver reserves threatening European currency.

Under attack from allied Air and Naval forces, the Libyan Army troops have begun to desert to the rebel side in increasing numbers. The rebels are making an effort to greet these troops as fellow Libyans, in an effort to encourage additional defections.

(Source Comment: Speaking in strict confidence, one rebel commander stated that his troops continue to summarily execute all foreign mercenaries captured in the fighting…).

While the illegality of extra-judicial killings is easy to recognize (groups engaged in such are conventionally termed “death squads”), the sinister reality behind the “foreign mercenaries” reference might not be as immediately evident to most.

While over the decades Gaddafi was known to make use of European and other international security and infrastructural contractors, there is no evidence to suggest that these were targeted by the Libyan rebels.

There is, however, ample documentation by journalists, academics, and human rights groups demonstrating that black Libyan civilians and sub-Saharan contract workers, a population favored by Gaddafi in his pro-African Union policies, were targets of “racial cleansing” by rebels who saw black Libyans as tied closely with the regime.[1]

Black Libyans were commonly branded as “foreign mercenaries” by the rebel opposition for their perceived general loyalty to Gaddafi as a community and subjected to torture, executions, and their towns “liberated” by ethnic cleansing. This is demonstrated in the most well-documented example of Tawergha, an entire town of 30,000 black and “dark-skinned” Libyans which vanished by August 2011 after its takeover by NATO-backed NTC Misratan brigades.

These attacks were well-known as late as 2012 and often filmed, as this report from The Telegraph confirms:

After Muammar Gaddafi was killed, hundreds of migrant workers from neighboring states were imprisoned by fighters allied to the new interim authorities. They accuse the black Africans of having been mercenaries for the late ruler. Thousands of sub-Saharan Africans have been rounded up since Gaddafi fell in August.

It appears that Clinton was getting personally briefed on the battlefield crimes of her beloved anti-Gaddafi fighters long before some of the worst of these genocidal crimes took place.

RT also revealed Gaddafi’s gold dinar that was set to replace the dollar and euro. As this has been called a conspiracy by the deceived masses, Blumenthal’s intel email to Hillary Clinton was quite literally the smoking gun.

The intelligence email update from Sidney Blumenthal to Clinton has been removed from the Department of State’s Freedom of Information website as you can see in the screenshot below. The documents were at the following URL: https://www.foia.state.gov/searchapp/DOCUMENTS/HRCEmail_DecWebClearedMeta/31-C1/DOC_0C05779612/C05779612.pdf which returns a ‘page not found’ message when access is attempted.

A quick search on the Internet Archive’s Wayback Machine reveals the documents containing copies of the email in question were mysteriously deleted at some point in time.

A cached copy of the documents is available here. 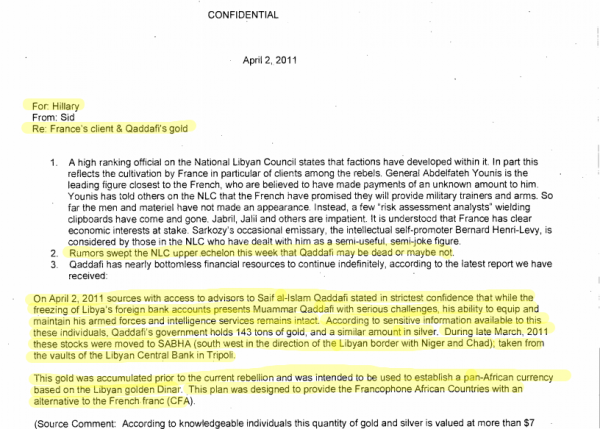 Blumenthal’s emails to Clinton which were hacked by an anonymous hacker going under the alias “Guccifer” (who has been revealed as Marcel Lazar Lehel) also revealed some of the other memos – including ones about the attack on the U.S. consulate building in Benghazi and the death of Ambassador Chris Stevens. The hacked emails were sent to Russia Today back in 2013.

A hacker using the alias “Guccifer” was credited last week with compromising the AOL email account of Sidney Blumenthal, a 64-year-old journalist who formerly worked as an assistant to then-President Bill Clinton. Now days after the security breach was first reported, Guccifer has supplied RT and a number of other media outlets and political figures with incredibly sensitive memos that were emailed to Mr. Clinton’s wife, Hillary, in the wake of last year’s terrorist attack in Benghazi, Libya.

Why has the Department of State deleted the email? This seems to be an attempt to wipe any incriminating information from their servers. Fortunately, many independent journalists and investigators have copies of many of Hillary’s emails and so does the Wayback Machine. The cat has been let out of the bag so to speak, the damage has been done, Hillary’s crimes have been exposed and it’s too late to do anything about repairing the damage.