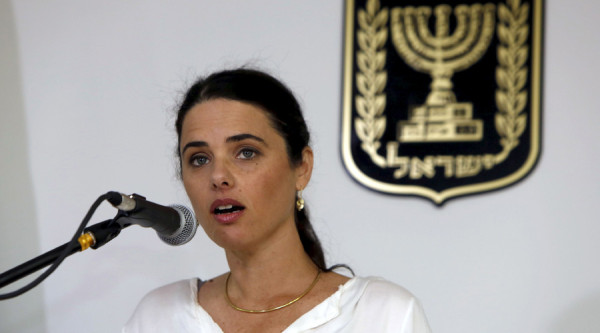 Israeli Justice Minister Ayelet Shaked has spoken out in favor of an independent Kurdish state. She also urged increased cooperation between Israel and the Kurdish people. Shaked sees this as an opportunity to weaken Israel’s rivals in the region.
“We must openly call for the establishment of a Kurdish state that separates Iran from Turkey, one which will be friendly towards Israel,” Shaked told the annual INSS security conference in Tel Aviv on Tuesday, as cited by the Times of Israel.

The minister stressed that Israel should “promote steps that would correct the injustice that [made Kurds] the biggest nation without a state,” BasNews reported. She also emphasized that “the Kurds are an ancient people with thousands of years of history, and a democratic nation” – one that has “never attacked any other nation.”

For Shaked, this isn’t just about driving a regional wedge between all the countries that could not accommodate a separate Kurdish state.

Read more
Anti-aircraft missile S-200 being launched during a war game from an unknown location in Iran. © Iran’s Army‘I prefer ISIS’: Iran’s terror infrastructure is greater threat to Israel – defense minister
“The Kurdish people are a partner for the Israeli people,” she continued, adding that Islamist extremism in the region is something both the Kurds and Israelis can work together on combatting. “We Kurds and Jews have a long history. We have common interests in trying to stop Daesh [Islamic State/IS, formerly ISIS/ISIL] and the Kurds are fighting ISIS with all their might.”

Also speaking at the INSS was its current director and former major general Amos Yadlin. He stressed that the “20 million Kurds who didn’t get a state, and nobody takes care of” are the only ones who are serious about defeating ISIS. “[The] Kurds are the only ones fighting ISIS as their highest priority.”

Although there was always implicit support from the Israelis for a free Kurdish state, there are no official diplomatic ties between the two peoples. However, reports claim that visible business and military cooperation exists between Israel and the semi-autonomous Kurdish region in Iraq.

In 2014, Prime Minister Benjamin Netanyahu also advocated the creation of an independent Kurdistan.

Iraqi Kurds continue to call for freedom, and Kurds also make up 10 percent of Syria’s population. They are the largest ethnic minority in Turkey, where they have been immersed in bloody confrontation with the government of Recep Tayyip Erdogan.

Israel is also running out of friends, and some believe that calls for an independent Kurdistan are aimed at establishing at least one Muslim ally for the Jews.