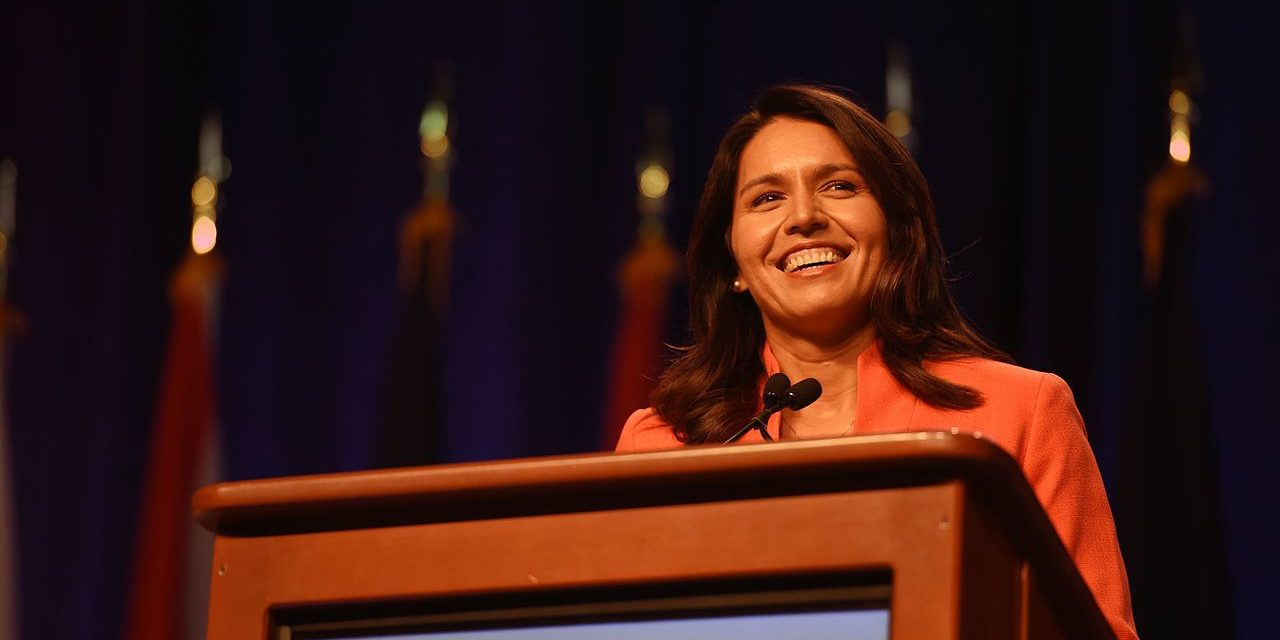 Democratic Congresswoman Tulsi Gabbard, the politician who previously accused the U.S. of arming ISIS, is still calling on the U.S. government to stop its disastrous regime change policies in the Middle East.

According to a press release made public on Tuesday, Gabbard has again called for the U.S. to stop aiding terrorists like al-Qaeda and ISIS. Gabbard’s guest at the presidential address to Congress, a Kurdish refugee activist, also called for an end to the U.S. policy of “regime change in Syria.”

“In the face of unimaginable heartbreak, Tima has been a voice for the voiceless, a champion for refugees worldwide, and a strong advocate for ending the regime change war in Syria. I am honored to welcome her to Washington tonight as we raise our voices to call on our nation’s leaders to end the counterproductive regime change war in Syria that has caused great human suffering, refugees, loss of life, and devastation. We urge leaders in Congress to pass the Stop Arming Terrorists Act and end our destructive policy of using American taxpayer dollars to provide direct and indirect support to armed militants allied with terrorist groups like al-Qaeda and ISIS in Syria, who are fighting to overthrow the Syrian government.”

“For years, our government has been providing both direct and indirect support to these armed militant groups, who are working directly with or under the command of terrorist groups like Al-Qaeda and ISIS, all in their effort and fight to overthrow the Syrian government.”

The activist, Tima Kurdi, is more widely known as the aunt of a three-year-old boy who drowned on the shores of Turkey in September 2015. The image went viral on social media and was easily manipulated by the mainstream media to further the United States’ agenda in the region, never once laying blame to the U.S. military establishment for spending over $1 billion a year arming Syrian rebels.

According to the press release, Kurdi said the following:

“I am proud to stand with Tulsi and support her work to end regime change war in Syria. My people have suffered for more than six years—enough is enough. Tulsi understands that arming the so-called “rebels” in Syria has only led to more bloodshed, more suffering, and created more refugees. A military solution in Syria is not the answer. I hope that President Trump will stop arming terrorists and commit to a political solution in Syria—it is the only way to restore peace.”

Gabbard came under fire earlier this year when she took a secretive trip to Syria and met with President Assad, as well as a number of other people on the ground. The fact that her proposed policies have the backing of the relative of the drowned Syrian refugee — whose images the media exploited in 2015 to advance the western narrative against Assad — should speak volumes about the efficacy of Gabbard’s approach. Despite this, the media hardly pays heed to Gabbard’s ideas.

In 2014, PBS ran a report in which they interviewed Syrian rebels who had been trained by the CIA at a camp in Qatar. According to one of the fighters:

“They trained us to ambush regime or enemy vehicles and cut off the road…They also trained us on how to attack a vehicle, raid it, retrieve information or weapons and munitions, and how to finish off soldiers still alive after an ambush.”

The latter emboldened section is a blatant war crime and is also the standard operating procedure for ISIS. Regardless of the banner these rebels operate under, this is a terrorist tactic, and it is ultimately what American taxpayer dollars have been doing in Syria.