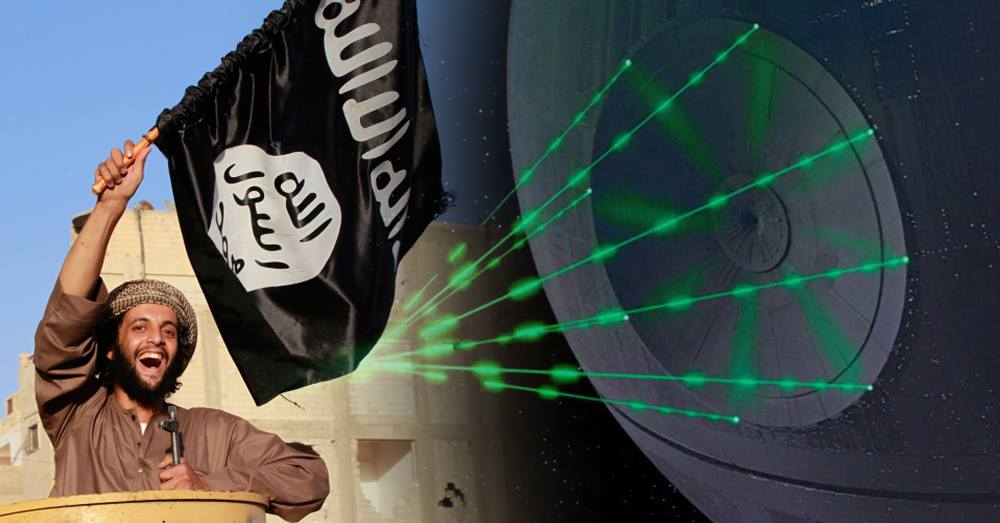 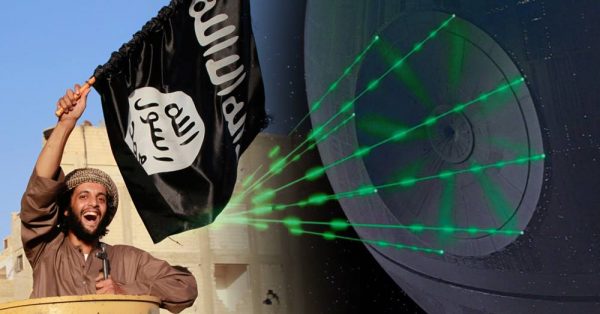 A U.S. Air Force commander has proclaimed that space weapons can now be used against ISIS—and no, this is not science fiction. This type of technology has been developed, in secret, for years. In this article, we will take a look at what some of these weapons might be, and what they can be used for, as well as some history about space weapons.

“If we want to be more agile then the reality is we are going to have to push decision authority down to some lower levels in certain areas the big question that we’ve got to wrestle with … is the authorities to operate in cyber and space,” General David Goldfein, the Air Force chief of staff, told USA TODAY.

Although, General Goldfein did not go into detail citing that the material is classified, there is enough data out on the internet to speculate what weapons could be used against the Islamic state.

But before we dive deep into the dark SAP (special access program) world of secret space weapons, here is a history lesson:

Let’s first look at a project known as Horizon, which was supposedly just a drawn up plan in the 1960’s that was our first canceled project in a long list of projects that were canceled, that seemingly depict the blueprints for a Secret Space Program base on the moon.

Next, we have the MOL (Manned Orbiting Laboratory) which is Cigar shaped.  The MOL would serve as a headquarters in space, but this project also seemed to end up in the shredder.

Then there is the air force’s X-20 Dyna-Soar space plane, which was also designed in the 1960s and was allegedly scrapped for metal.

Finally, there is a quote by Ronald Regan in his diary that makes only a little more sense when compared with a 1989, New York Times article which reported that the Air Force had shut down another planned manned space program, with a staff of 32 astronauts and a space shuttle launching facility in Colorado. 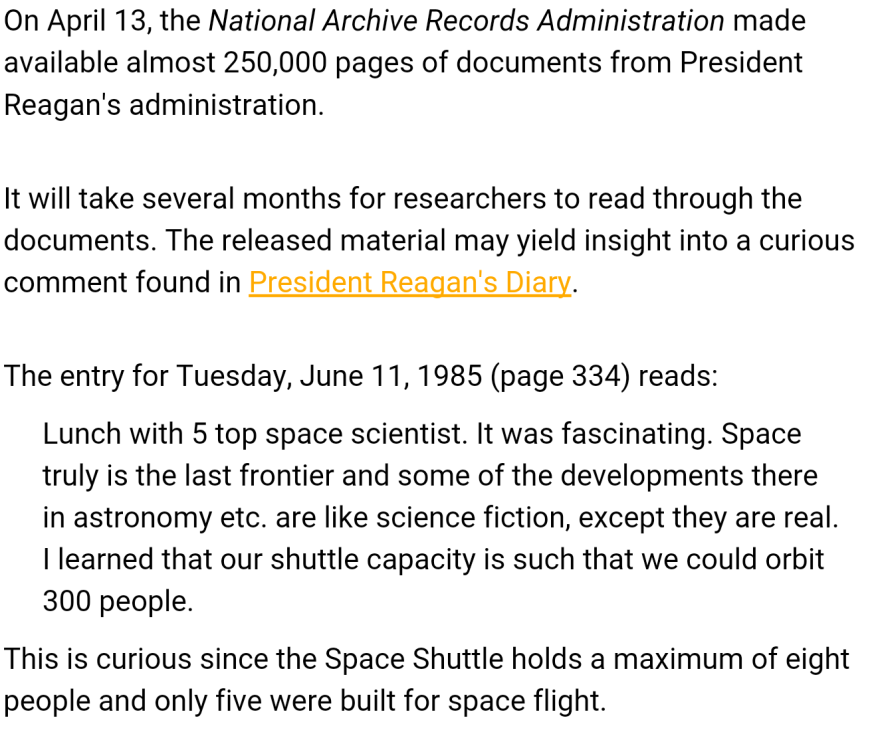 Do these defense forces potentially exist today under high levels of national security and under the black budget of 52.6 billion dollars revealed by Edward Snowden?

Sen. Daniel K. Inouye (D-Hawaii) said years prior, “there exist a shadow government with its own air force its own navy, its own funding mechanism  and the ability to pursue its own ideas of national interest-free from checks and balances and the law itself.” 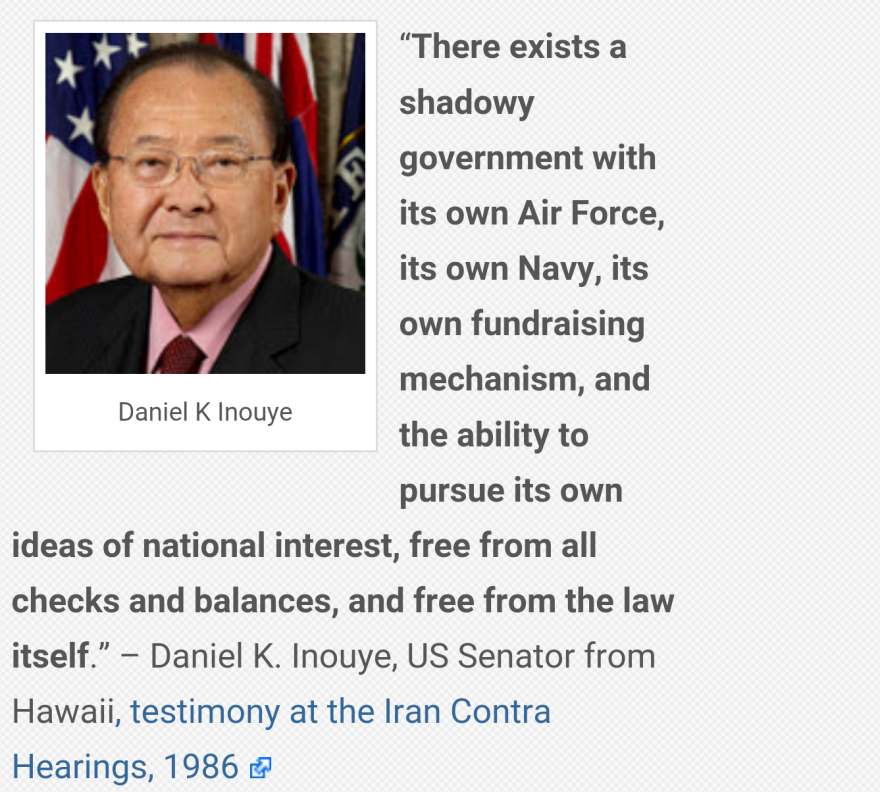 Reagan said, “space truly is the last frontier and some of the developments there in astronomy etc. are like science fiction, except they are real. I learned that our shuttle capacity is such that we could orbit 300 people.”

Modern space shuttles only carry eight Passengers Maximum, so 32 or 300 would be an accomplishment indeed.

Ronald Reagan is also the same president who signed the SDI or “Starwars Defense Initiative” and gave his famous speech about how if the earth was invaded by a hostile force, we would all have to forget our differences and come together in peace.

There is also a space weapons agreement that a congressman proposed called the “Space Preservation Treaty”  in 2005, that states that countries won’t seek to weaponize space. However, Obama recently violated this agreement under the 2017 NDAA Act, and no one noticed the legislation he signed is essentially the Starwars Defense Initiative II that his predecessor, Ronald Reagan, signed calling for a space-based missile system.

However Russia and China want a Treaty on the Prevention of the Placement of Weapons in Outer Space Russian Ambassador to the U.N., Dr. Vitaly Churkin expressed.

In fact, in WikiLeaks’ John Podesta emails, an email from the former astronaut, and sixth to walk on the moon, Edgar Mitchell talks about this treaty with Podesta.

So Obama is essentially setting the stage for President Donald Trump to use these capabilities but just what are the types of space weapons that can be used against ISIS and U.S. adversaries?

The rod of god is one, the TR3B NSA/DoD/USAF Space command hyper velocity craft is another.  It is for surveillance purposes, as the craft has the ability to cloak, like this soldier running in front of a tank.  Yes, this technology exists, and this is real.  It works through bending light around an object.

ROD OF GOD:
What is the Rod Of God? The rod of god is a part of the direct energy weapon family; it’s a kinetic energy weapon.

The rods are directed munitions, the higher you are (the greater your distance from the planet), the greater the kinetic energy you have.

“A pair of satellites orbiting several hundred miles above the Earth would serve as a weapons system. One functions as the targeting and communications platform while the other carries numerous tungsten rods–up to 20 feet in length and a foot in diameter–that it can drop on targets with less than 15 minutes’ notice. When instructed from the ground, the targeting satellite commands its partner to drop one of its darts. The guided rods enter the atmosphere, protected by a thermal coating, traveling at 36,000 feet per second–comparable to the speed of a meteor. The result: complete devastation of the target, even if it’s buried deep underground. The two-platform configuration permits the weapon to be “reloaded” by just launching a new set of rods, rather than replacing the entire system.”

The concept of developing kinetic-energy weapons has been around ever since the RAND Corporation proposed placing rods on tips of ICBMs in the 1950s. Though the Pentagon won’t say how far along the research is, or even confirm that any efforts exist, citing those details are classified. The “U.S. Air Force Transformation Flight Plan,” published by the Air Force in November 2003, references “hypervelocity rod bundles” in its outline of future space-based weapons, and in 2002, another report from RAND, “Space Weapons, Earth Wars,” talks about the effectiveness of such a weapon.

In 2015, natural news reported that the several explosions in Tianjin, China were due to the rod of god, largely due to the Chinese cyber attacks and currency devaluation that took place in 2015.

In 2011, a few years prior, The New York Times reported that the Defense Department was working up new strategies to counter cyber attacks, including, as the paper reported, “a military response,” because they would soon consider cyber attacks as an act of war.  In 2015, the New York Times followed up with a report on “The Rods From God.”

When you first start researching space weapons one man comes up a lot in your searches, and that man is Edgar Fouche.

Whistleblower Master Sergeant Edgar Fouche (deceased) worked as an avionics engineer for the U.S. Air Force for over 20 years, and in 1998, published details of an aerial vehicle known as the TR3B that he claims was developed in secret by the N.S.A. and U.S.A.F. 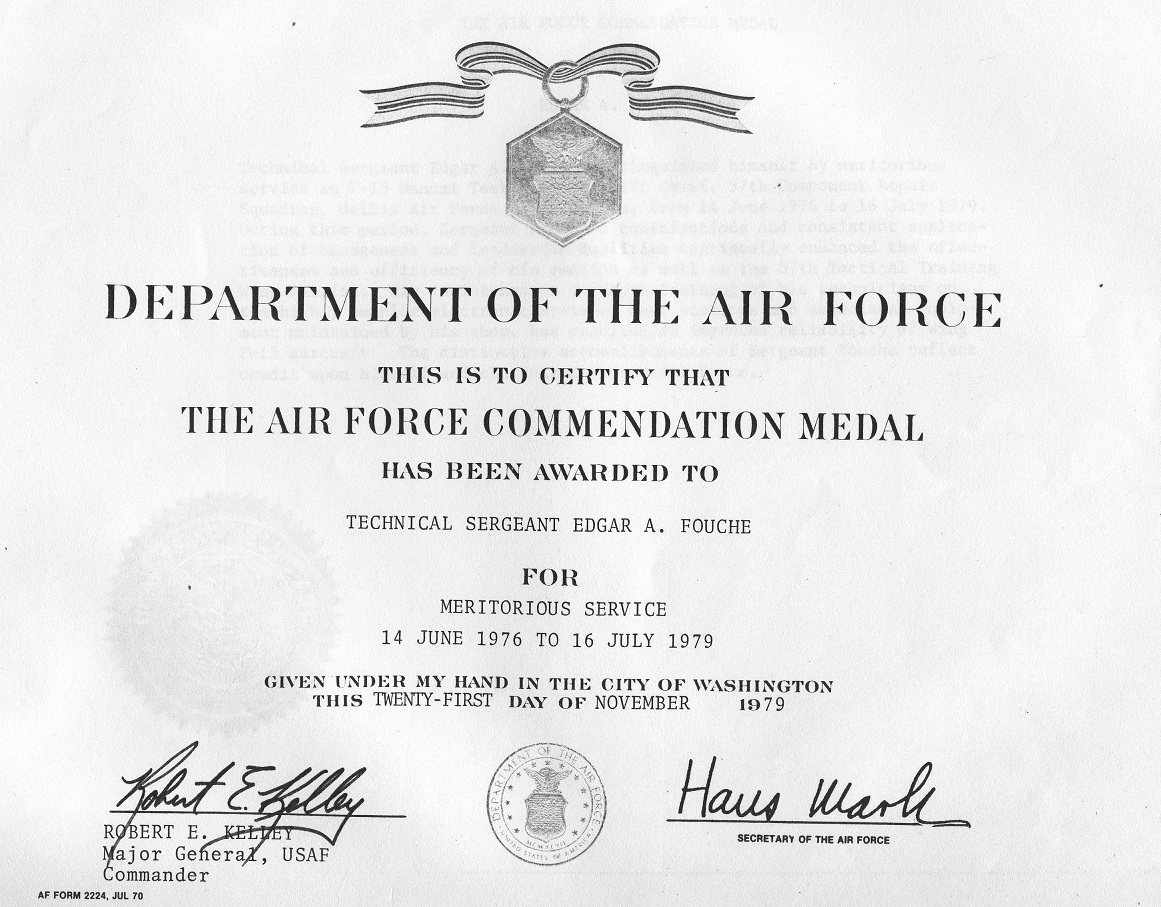 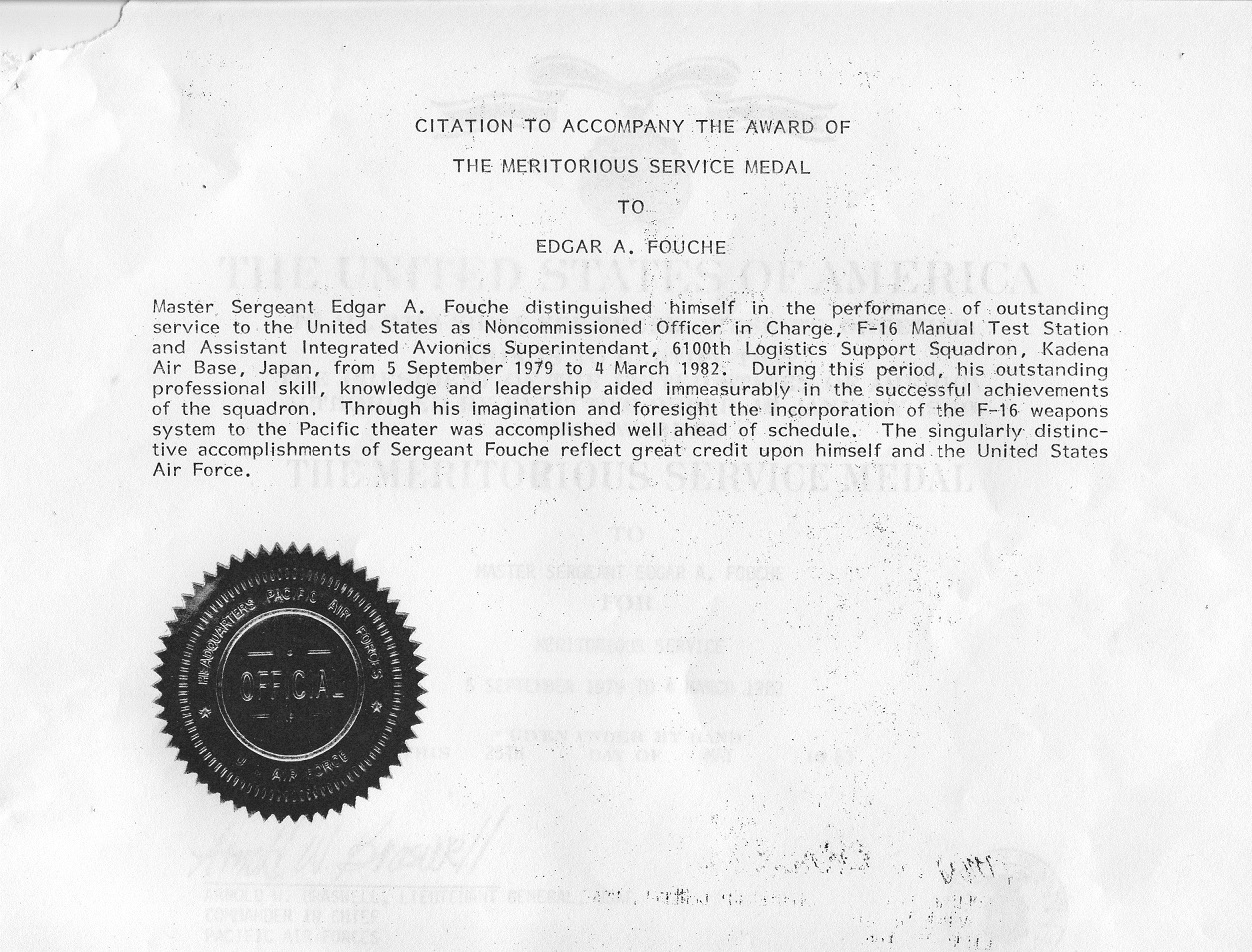 The performance characteristics of this vehicle are mind-boggling, using field propulsion to reduce the weight of the craft, plasma, and traveling faster than 30x the earth’s gravity at mac 9 (6,900 mph) vertically or horizontally.

Is this possible? Let’s first answer if the speed is achievable: recently warp drive technology like this became public and the Chinese tested the leaked EM-drive patent and manufactured the device, so the technology is indeed operational and NASA has confirmed too that it works. An astrophysicist claimed that we would have it within 100 years while another scientist in Britain  Roger Shawyer claimed he figured out the secret and we could reach the moon in four hours. Russia has made a similar claim, but with a nuclear-fission engine, claiming that the engine can provide a fast way to get to mars in 6 weeks.

Next, let’s talk about the possibility to generate a magnetic field for the use of propulsion.  Is this plausible? A scientific paper titled, “generating a magnetic field by a rotating plasma” proves that this is indeed possible.

Former Lockheed Martin Skunkworks Senior Scientist Boyd Bushman came out in 2012, on his deathbed, about Antigravity Propulsion Devices and how they tie into what is known as “Singularity,” which allow you to move anywhere within the universe instantaneously. He further explained how magnetics worked doing a magnet experiment with a copper pipe and aluminum pipe.

Is there any video evidence of such an anti-gravity craft being used? In Canada, released through a FOIA request, there is a video of the Avrocar, which was the U.S. army’s top secret flying saucer, tested between 1952-1961. Although the Avrocar only reached hovering heights of three feet and speeds of 30 knots.  This shows that levitation technology was actively being developed in the 1950s-60s, so it’s believed to be a prototype of the hovering craft, but it’s not the only known prototype.  Another project, the supersonic flying saucer, was declassified and was worked on in the 1950s.

Fouche says to the deniers in the video below that, “if you think these rumors are far-fetched look at the YB49 flown in 1948 and the XB70 flown in 1964, then look at the SR-74 and SR-75 Aurora which has been spotted numerous times you say that the government can’t keep a secret? Boy, you are wrong.”

Fouche says that the “SR-74 and SR-75 or Aurora” were both “replacements for the SR-71 blackbird spy plane.”

The SR-71 blackbird was developed in 1964, Fouche alleges that its replacement was created in the 1990’s almost two decades later. Before the SR-71 in 1962, there was another plane as mentioned above, the X-20 Dyna-Soar, which literally says space plane on the air forces website.  Do you really think that was the air force’s last attempt at a space vehicle?

Today the air force space command, separate from the air force, admittedly has the X-37B an unmanned space-craft that has had numerous unknown missions into space.

With this technology, combined with the rod of god, it would bring a whole new edge to the battlefield against ISIS and adversaries in general.