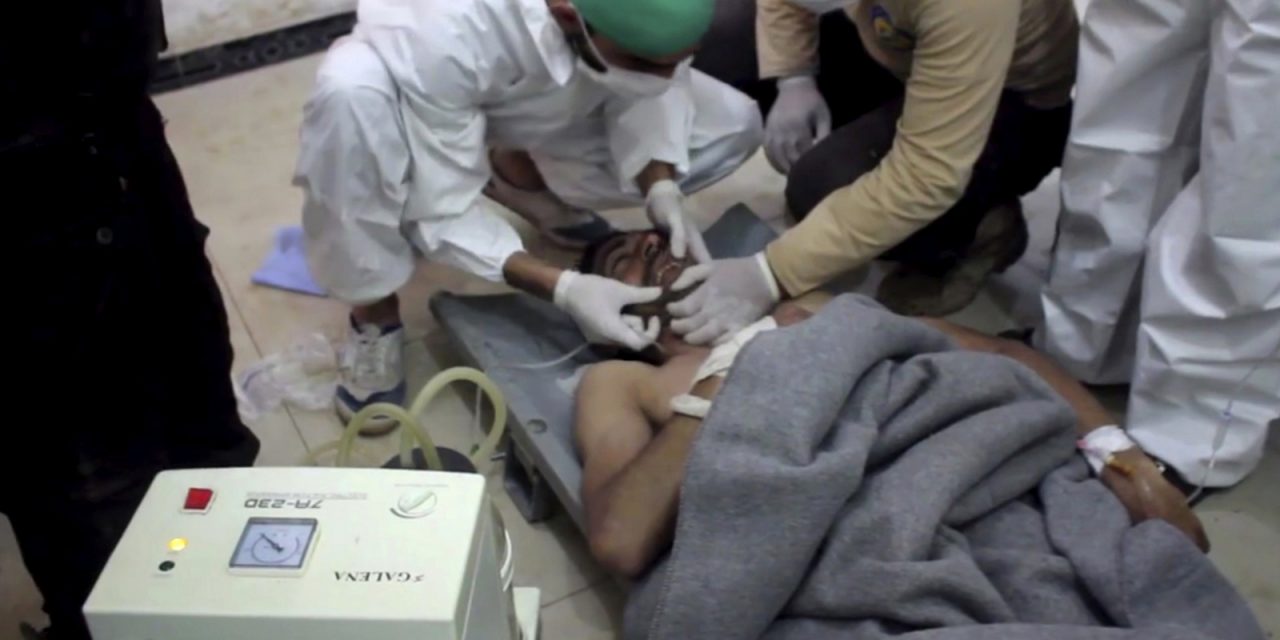 A deadly chemical attack was carried out in northwestern Syria’s Idlib Province early Tuesday, killing at least 58 people. The United States and its allies have been quick to blame Syria’s government for orchestrating the attack, despite a significant lack of proof.

After an unsuccessful attempt to blame the Syrian government for a 2013 gas attack in Ghouta that was most likely carried out by al-Qaeda’s Al-Nusra Front, the U.S.-led coalition’s pretext for a military intervention in Syria to oust President Bashar al-Assad has largely crumbled as Russian diplomats were able to negotiate a deal with the United Nations on behalf of their Syrian allies.

Nearly four years later, history seems to be repeating itself, with Syria’s government being accused, once again by NATO allies, of carrying out yet another chemical weapons attack in al-Qaeda-held Idlib Province. The attack has left at least 58 dead.

But this time the stakes are higher, as the U.S.-led coalition has recently deployed thousands of troops in Syria that are set to remain long after Daesh and other terrorist groups are eradicated. To make matters worse, Vitaly Churkin, the Russian UN envoy who helped negotiate the 2013 agreement and prevent U.S.-led military intervention, lies dead under still -undisclosed circumstances. With coalition members already accusing the Syrian government of violating the 2013 agreement, it appears that the specter of foreign military intervention in the embattled nation may again be on the table, threatening the peace conference regarding Syria set to begin today in Brussels.

For the U.S. and its allies, the timing couldn’t be better to finalize their regime change operation in Syria – an operation that has been documented for over 25 years. 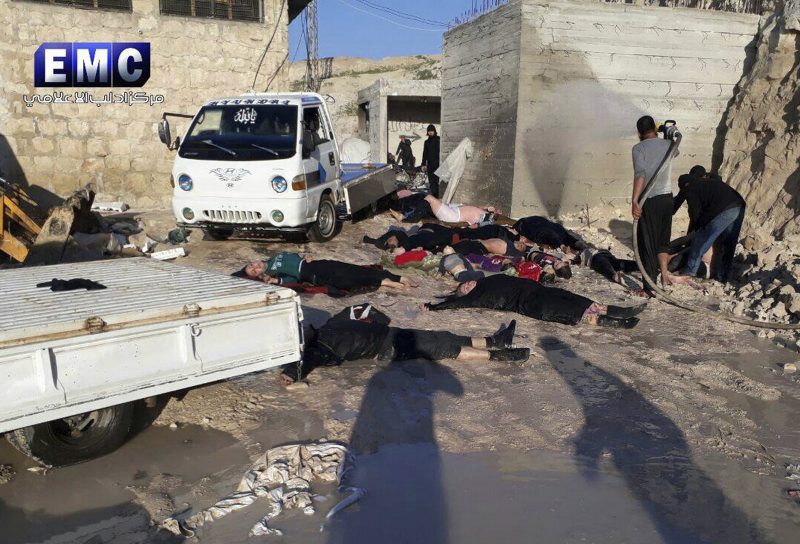 This photo provided Tuesday, April 4, 2017 by the Syrian anti-government activist group Edlib Media Center, which has been authenticated based on its contents and other AP reporting, shows victims of a suspected chemical attack, in the town of Khan Sheikhoun, northern Idlib province, Syria. The suspected chemical attack killed dozens of people on Tuesday, Syrian opposition activists said, describing the attack as among the worst in the country’s six-year civil war. (Edlib Media Center, via AP)

News broke early Tuesday morning of yet another tragedy in the nearly six-year-long “civil war” in Syria, this time in the northwestern province of Idlib, where a chemical gas attack is estimated to have killed 58 people, including 11 children, according to multiple media reports. Two groups – the White Helmets and the Syrian Observatory for Human Rights – have blamed the Syrian government for the attack.

The Syrian Army has flatly denied the charges, stating that the army “has not and does not use [chemical weapons], not in the past and not in the future, because it does not have them in the first place” – a reference to the 2013 agreement whereby the Syrian government dismantled its chemical weapon stores as part of the accord that avoided U.S.-led military intervention.

However, mainstream media reports along with Western nations are already adopting the accusations against the Syrian government as fact. In a near-repeat of 2013, these nations seem unwilling to confirm such grave accusations before taking action, seemingly content to take the words of these two groups as sound despite significant evidence pointing to their disrepute.

Both of the groups who have blamed Assad’s forces for the attack have come under fire repeatedly for their ties to pro-intervention institutions, NATO-allied governments and even al-Qaeda – all of whom who have a stake in regime change.

The White Helmets, for instance, were founded by a former British army officer turned mercenary and frequently worked with Purpose, Inc. – a George Soros-funded PR firm that has been pushing for Western intervention in Syria for years. They also receive millions in funding from Western governments, including 23 million dollars from the U.S., and operate almost exclusively in areas held by al-Nusra Front, a Syrian al-Qaeda affiliate, with whom they have collaborated with on a regular basis. They have been caught on camerafacilitating public executions of civilians in Aleppo and elsewhere.

The Syrian Observatory for Human Rights (SOHR) is equally dubious, but for different reasons. Unlike the White Helmets, the Syrian Observatory for Human Rights consists of just one man, an anti-Assad Syrian national by the name of Rami Abdul-Rahman who lives in the United Kingdom. Abdul-Rahman’s “sources” in Syria, from which he receives his information regarding the war, are anonymous and never recorded – thus making them completely unverifiable.

It was these same two groups who provided much of the “intelligence” that was used to blame the Syrian government for the 2013 attack in Ghouta. But once the media frenzy and manufactured outrage in the West had died down, it emerged that the Syrian army was not the likely culprit behind the attack and that it had instead been carried out by al-Qaeda-linked rebels in the area.

A year later in 2014, former UN weapons inspector Richard Lloyd and Professor Theodore Postol of MITpublished a report that found that the intelligence used to blame Assad’s forces for the attack was grossly inaccurate. A few months later, Pulitzer Prize award-winning journalist Seymour Hersch confirmed that the al-Nusra rebels in Ghouta had the means, motive and opportunity to carry out the attack themselves. On separate occasions, al-Nusra was confirmed to have used chemical weapons against civilians.

Just like Ghouta, Idlib is dominated by al-Nusra. Earlier this year, even the Washington Post admitted that Idlib’s “moderate” rebels had all but been replaced by al-Nusra and other terrorist factions in Syria. Aron Lund of the Century Foundation told the Post that “Idlib is now basically being abandoned to the jihadis. This might be the end of the opposition as understood by the opposition’s backers abroad. They won’t have any reason to support it.”

If Western governments and media outlets repeat the mistakes of 2013 by not verifying the claims made by the White Helmets or the one-man show at SOHR, they may very well end up offering these extremist groups support if they prematurely choose to retaliate against Assad before the dust can settle. 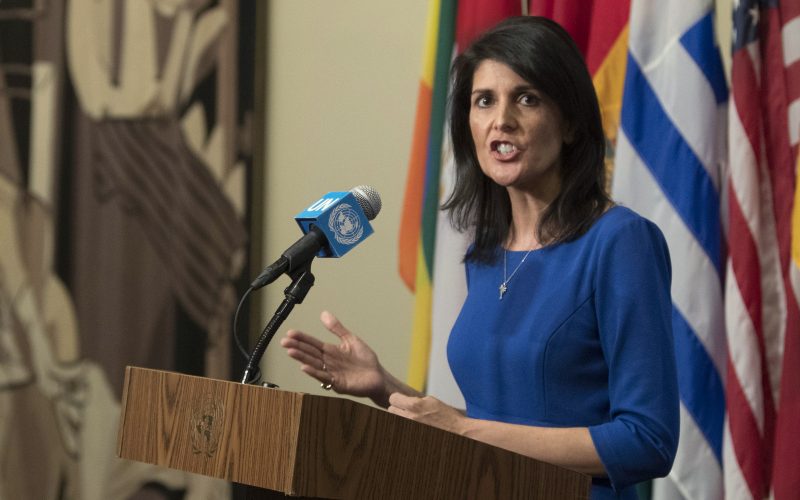 Framed by a a tapestry reproduction of Pablo Picasso’s Guernica and member state flags, United States Ambassador to the United Nations Nikki Haley speaks to reporters after a Security Council meeting on the situation in the Middle East, Thursday, Feb. 16, 2017 at U.N. headquarters. The United Nations and the Arab League on Thursday issued a joint statement in support of the establishment of a Palestinian state. (AP Photo/Mary Altaffer)

Will intervention be on the table?

However, the U.S.-led coalition and NATO nations seem less interested in the veracity of the information than in the opportunity these accusations – however baseless and dubious they may be – offer for their long-standing goals of regime change in Syria. Immediately after news of the attack broke, with only the White Helmets and SOHR testimony as sources, France – a U.S. coalition member – called for an emergency meeting of the UN Security Council to discuss how to respond to the “disgusting” attack, a meeting now set to take place Wednesday morning.

Hours later, EU diplomatic chief Federica Mogherini said that Assad bears “primary responsibility” for the attack. If more countries choose to lay the blame on Assad for the attack, the 2013 agreement could easily crumble – making Syria once again vulnerable to foreign military intervention.

The Associated Press reported that the U.S. envoy to the UN Nikki Haley condemned the attack as “terrible” but stopped short of blaming Assad directly. However, Haley said just yesterday that the Syrian people no longer wanted Assad as leader after telling ABC News on Sunday that “Assad is always a priority” and that the U.S. planned to bring him to justice. These comments stray far from the rhetoric recently used by U.S. Secretary of State Rex Tillerson, who said last Thursday that the long-term status of “President Assad will be decided by the Syrian people.”

Haley’s recent statements suggest that the Trump administration’s approach is quickly shifting and will likely shift even more due to these latest accusations targeting the Syrian government. While some in the Trump administration, such as Tillerson, have publicly called for a non-interventionist approach in Syria – something which Trump himself has long promised – recent U.S. military actions in Syria suggest that the real strategy is something else entirely.

As MintPress previously reported, Trump’s recent deployment of 2,500 troops to the Middle East – which are to be divided between Syria and Iraq – suggests that the U.S. is preparing for more than just a “final assault” against Daesh, especially considering that the Army even admitted that troops would stay in Syria long after Daesh’s defeat to “stabilize” the region for its “allies.”

In addition, recent moves by the administration to create “safe zones” in Syria would also require the U.S. to significantly increase its troop deployments in Syria – troops that would remain in the country indefinitely. Indeed, the Pentagon has suggested that future troop deployments in Syria will be significant, as it is no longer publicly announcing future deployments or troop movements. All of this despite the fact that Assad has stated that U.S. forces were not invited into the country and that they are essentially “invaders.”

Given that this latest gas attack is already being used politically in a similar fashion to the Ghouta attack of 2013, it seems likely that Assad will once again become a target of this quickly-growing standing army of foreign soldiers within its borders – one that has amassed under the cover of offering humanitarian assistance and “fighting terrorism.”