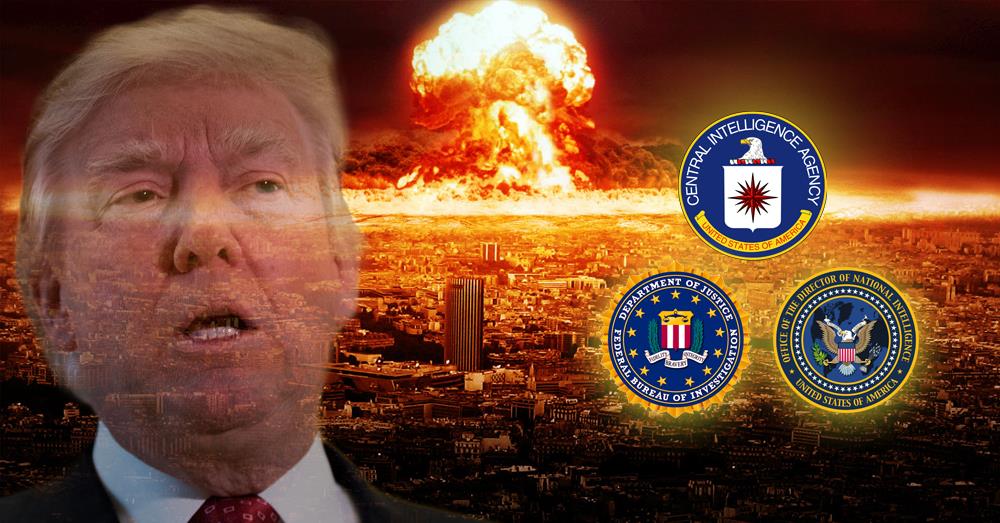 If it’s not clear by now that the U.S. intelligence community and nationalist U.S. elite supporting the new Trump information are engaged in civil war being fought with information, here is a view from the outside.

A former member of German parliament sees that the strife in Washington amid conflicting reports saying that Russia hacked the DNC and the U.S. despite the FBI or any other intelligence agency for that matter ever having access to the DNC’s server.

““When you see the situation in Washington, I think they are not willing, those who lost the election, to accept the new president whose name is Trump… What’s going on in Washington sounds like the beginning of a civil war,” Wimmer said.

Then there are the apparent leaks throughout the 2016 election, which as former NSA Technical Director William Binney and other intelligence officials and Judge Napolitano note, have all the markings of a massive inside intelligence leak on Hillary Clinton, the DNC, George Soros and Colin Powell.

Additionally, there are the anonymous leaks of “information” to the Washington Post like the Russians hacking the election with no proof given – just words or that incredulous list calling anyone who could source Hillary’s scandals Russian propaganda.

Finally, there is Hillary Clinton’s own FBI case which faced a number of leaks throughout the election of insiders coming out leaking what we now know as documented fact.

The fact that Hillary Clinton was under not one, but at least two separate probes by the FBI, one focusing around her server the other focusing around the Clinton Foundation which is still ongoing. The Fraudation probe I have been speaking about for as far back as it started due to my own “anonymous” sources.

There is a clear animosity growing within the government between both former and current officials just the same way as some were against Hillary Clinton some are against President-elect Donald Trump.

The only difference here is that it seems like the latter is just making up information and releasing it exhibit A.) Donald Trump’s golden shower “intelligence report.” Which now the Director of intelligence James Clapper has admitted they were trolled by 4chan. The problem lies in politicizing our Intelligence agencies and them not even fact checking how that report was believable is beyond me it reads like satire.

“In January, 1961, Dwight Eisenhower delivered his farewell address after serving two terms as U.S. president; the five-star general chose to warn Americans of this specific threat to democracy: “In the councils of government, we must guard against the acquisition of unwarranted influence, whether sought or unsought, by the military-industrial complex. The potential for the disastrous rise of misplaced power exists and will persist.” That warning was issued prior to the decadelong escalation of the Vietnam War, three more decades of Cold War mania, and the post-9/11 era, all of which radically expanded that unelected faction’s power even further.” Glenn Greenwald, writes.

I’ll go one step further in the 1930’s only 30 years prior to President Dwight Eisenhower, General Smedley Butler under President Franklin Delanor Roosevelt warned of a fascist takeover in America in which a group of conspirators sought to involve him in overthrowing then President Franklin Delanor Roosevelt. “The plan that was outlined to me was to form an organization of veterans to use as a buffer or a club at least to intimidate the government,” Smedley Butler said broadcast on every television nationwide. One of the people involved in that coup was Bush’s grandfather Prescott Bush according to the BBC it’s also well known that Prescott Bush funded Hitler’s rise to power mere years later so the list of treason against humanity spans deep on him.

His son George Bush Sr. is the same man who stood and said, “we need a New World Order.”

It’s true that history repeats itself whistle-blowers and people stand against corruption and coups back to Hillary Clinton in the months before the election another former government official Steve Pieczenik came out and said that “Hillary Clinton had attempted a civilian coup and there was a subsequent anti-coup enacted within various intelligence agencies” this confirmed information I had received as far back as March from various sources that showed there was a massive influx of former and current government officials/military who were displeased with Hillary Clinton they even labeled her as a national security insider threat.

I Have All these Ex Military and Feds Telling Me How Absolutely Corrupt @HillaryClinton Is My Question Is Why Not Do Something About it?

NO ONE IN THE MILITARY IS GOING TO LET @HillaryClinton INTO PRESIDENTIAL OFFICE SHES A THREAT TO NATIONAL SECURITY, CORRUPT TO CORE & LIAR..

Now back to Trump as Glenn Greenwald notes, “there is no bigger favor that Trump opponents can do for him than attacking him with such lowly, shabby, obvious shams, recruiting large media outlets to lead the way. When it comes time to expose actual Trump corruption and criminality, who is going to believe the people and institutions who have demonstrated they are willing to endorse any assertions no matter how factually baseless, who deploy any journalistic tactic no matter how unreliable and removed from basic means of ensuring accuracy?”

It comes back to that old story that you were told when you were a kid the boy who cried wolf except this time it’s the CIA and Democrats who cried “Russia” attempting to bring us back into cold war territory. If there was any doubt that there was a deep-state shadow government those doubts should be thrown out the window with Chuck Schumer issuing a warning to Trump, telling Rachel Maddow that “Trump was being really dumb challenging the intelligence community and they can hit back.” then there is the shadowy group that would meet to discuss HIllary Clinton’s case as documented by the FBI called the “7th Floor Group.”

As Greenwald further notes, “no one in the intelligence community was elected by the American people” they were selected. Many have a long standing ovation for pushing for wars and regime change as General Wesley Clark exposed in 2007, with his famous “5 years, seven countries” speech exposing someone in the Pentagon having such a monstrous plan, but there are a few defectors in high-ranking positions of power that are prepared to defend this country against enemies both foreign and domestic as many took that oath to do. For proof of this you can see this article on Anonymous within the U.S. military including in those ranks are high ranking NCOs uncommissioned officers. As the late ex-FBI Ted L. Gunderson released in a document Operation Vampire Killer (OVM) or the police and military against the New World Order is in effect.

Here are some hundred academic documents proving the new world order exist, what the actual plot is has long been speculation of the internet but the focus is not what the plot may be although Aaron Russo alleged before he died that the end goal was microchipping the populace to control them, the main focus should be that such a plot exist.

Is Donald Trump legit does he threaten this structure and plan? George Bush Sr. gave a cut throat to Trump captured on live TV. Time will tell if Trump really does want to drain the swamp one thing is for sure this war with the CIA deep-state shadow government is only just getting started we need to listen to whistle-blowers as they protect our very fabric of democracy and liberty, what’s left of it at least.