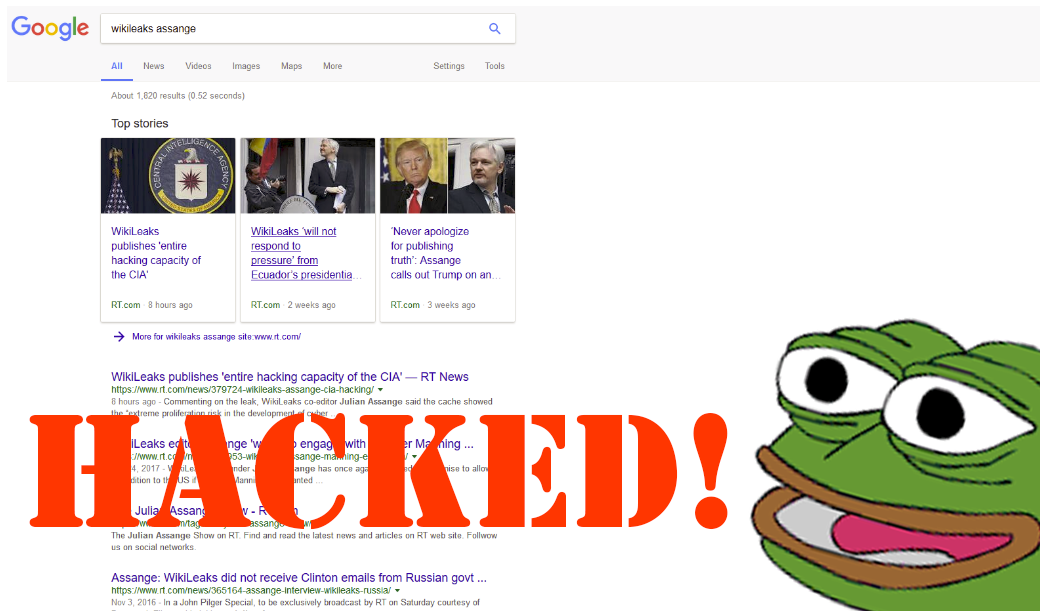 U.S. Senator Mark Warner has claimed that RT hacked Google during the 2016 election. RT responded by suggesting he learn how search engines work before making such ridiculous allegations.

What’s worse about this claim is that Warner is a top Democrat on the Senate Intelligence Committee, once rumored as a 2008 Presidential candidate, so you would think that he would know how algorithms work on the internet.

Someone should give Warner a lesson on search engine optimization  (SEO) and explain that you can’t hack Google’s search engine ranking system. This makes absolutely no sense.

We’re all playing by the same rules here, Mark.

“We saw manipulation of certain algorithms, so that if you Googled certain items, you got Russia news, RT News, other false news. We saw the selective hacking into DNC and individuals that then tried to leak that information to benefit Mr. Trump,” Warner told CBS’s “Face the Nation” on Sunday.

RT’s editor in chief Margarita Simonyan responded to Warner’s stupidity with a witty comment mocking his intelligence and threatening to haunt his dreams as Russia’s symbol of a bear.

“Somebody please tell the US Senator how internet search engines work. Or I’ll haunt his dreams in the guise of a bear – this could give him a heart attack!” Simonyan said.

The fact that a sitting senator doesn’t understand how Google works is a scary thought.

This guy is seated on the U.S. Senate Select Committee on Intelligence and that is absolutely terrifying.

I wonder if Warner is a part of the crowd blaming Abby Martin, a former RT reporter, for Hillary’s loss on a show that ended years ago called “Breaking The Set?”

The Russians always have a sense of humor when it comes to these allegations, some might say the Russians are the trolls, but maybe we could all learn a thing or two from the Russians and laugh off our problems.

[RELATED: Based Russian Embassy Tweets Pepe the Frog at Theresa May]