VIDEO: What Trump And Clinton Refuse To Admit About Taxes 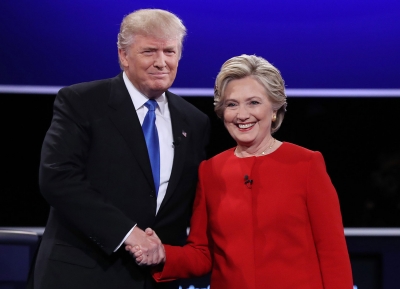 Hillary Clinton is criticizing Donald Trump for using the same tax break that she used, but that’s not the most important part of the story, and there’s one crucial thing that both Clinton AND Trump are refusing to say.

The New York Times released a report, which claimed that Donald Trump cited a Net Operating Loss of $916 million on his tax returns in 1995. Because of this, Trump got out of paying federal taxes legally for up to 18 years.

In response, the Clinton campaign released a video criticizing Trump for finding a way to get out of paying taxes. But thanks to the internet, we learned that Clinton took advantage of the same tax break Trump used.

But the thing is… While the election has been momentarily reduced to millionaires arguing over who got a bigger tax break, both candidates are missing the most important problem. The problem is the fact that a federal income tax exists in the first place.

Now, I’m guessing neither candidate has read the entire Federal Tax Code here in the country they are looking to lead, because it is over 70,000 pages long, consisting of over 4 million words. Our tax code was under 400 pages in 1913, which means that it has grown by 187 times in the last century, and if it continues to grow at the same rate, it will be 100,000 pages long by 2050.

And of course, there is a long list of issues within the government agency that is responsible for collecting that money. Did you know that the IRS has paid out $125 billion in fraudulent refunds in the last 10 years? That’s over $12 billion a year.

That’s not even mentioning the fact that we don’t have any say over where this money is going. We work long hours just to get by, and a significant portion of the little money we do earn is being used to fund endless wars, drone strikes that kill civilians, mass surveillance programs, the list goes on.

So to both Clinton and Trump, until either one of you actually have the guts to call for abolishing the IRS, don’t you dare say that you care about the middle class, and don’t act like you’re going to make life better for us. All you’re doing is leading the corrupt system that takes money from us without our consent and then uses it to take away our constitutional rights.