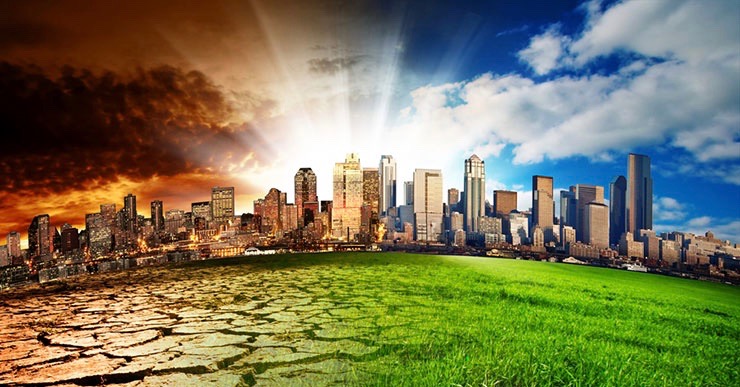 While there is documented proof that climate change has occurred over the years, a whistleblower is claiming that the National Oceanic and Atmospheric Association is directly responsible for pushing the existence of man-made “global warming” by forging temperature data.

After retiring as a scientist at the National Climatic Data Center last year, John Bates emerged on the front of the “global warming” debate as a whistleblower to cool the heated battle on man-made climate change by calling attention to the NOAA.

Bates said he decided to speak out after he read an article from the Washington Post titled, “Scientists Are Frantically Copying U.S. Climate data, Fearing It Might Vanish Under Trump.” Bates saw this as a joke, having worked for the NCDC and reportedly seeing the fraud firsthand.

The report originated from the UN in 2012 and shook up the entire scientific community, which cast doubt upon hundreds of models predicting a trend of accelerating warming.

Additionally, Bates told the Daily Mail that Karl did so by “insisting on decisions and scientific choices that maximized warming and minimized documentation.”

“Gradually, in the months after the report came out, the evidence kept mounting that Tom Karl constantly had his ‘thumb on the scale’ — in the documentation, scientific choices, and release of datasets — in an effort to discredit the notion of a global warming hiatus and rush to time the publication of the paper to influence national and international deliberations on climate policy,” John Bates said on Climate Etc. blog.

This chart below provided by climate depot shows a gap of warming for 18 years and 9 months:

Bates is not the only whistleblower who has disputed the report. House Science Committee Chairman Lamar Smith (R-Texas), who subpoenaed for NOAA’s internal communications, also alleged that the same study refuted claims that global warming had “paused” or slowed over the past decade, challenging a popular argument used by those who deny that the scientific consensus that man-made pollution is behind global warming.

NOAA denied the subpoena and in December 2015, Judicial Watch subsequently sued for documents that were withheld from Congress in the new climate data scandal.

Smith recently thanked Bates “for courageously stepping forward to tell the truth about NOAA’s senior officials playing fast and loose with the data in order to meet a politically predetermined conclusion.”

“Don’t believe it. The pause is real and in all other data sets. – NCDC-NOAA and Science may end up with egg on their collective faces. It does look a little suspicious that NCDC arrived at this earth-shaking ‘discovery’ after all these years, after ‘massaging’ its own weather-station data, just before the big policy conference in December in Paris,” Physicist Dr. Fred Singer said.

“The global surface temperature data sets are clearly a moving target. So while I’m sure this latest analysis from NOAA will be regarded as politically useful for the Obama Administration, I don’t regard it as a particularly useful contribution to our scientific understanding of what is going on,” climatologist Dr. Judith Curry said.

Congress launched an investigation into NOAA’s data manipulation in 2015. However, this has been going on for far longer than 2015, and it is not the only scandal that the concept of “global warming” has suffered; another scandal dubbed “Climategate” also broke out before the UN climate summit in 2009.

Climategate was the leak of thousands of emails from the University of East Anglia’s Climatic Research Unit between climate scientists that suggested they manipulated and hid data. Further, these scientists played a key role in the forming of the United Nations’ Intergovernmental Panel on Climate Change (IPCC), the body responsible for producing the reports on global warming.

What’s more, one year later in 2010, the academic Professor Phil Jones, director at University of East Anglia’s Climatic Research Unit at the centre of the ‘Climategate’ affair, whose raw data is crucial to the theory of climate change, admitted that for the past 15 years there has been no “statistically significant” warming. He also admitted that he was horrible at keeping records, something that would be crucial to prove Global Warming existed, reported Daily Mail.

A series of inquiries into the 2009 release found no evidence of scientific malpractice but did criticize some of the scientists for their unwillingness to share their data, including Eugene Wahl of the National Climatic Data Center in Boulder, Colorado, who admitted to deleting e-mails, as requested by Jones.

Despite this ruling, around 1,000 scientists dissented and called Global Warming a fraud in a senate minority report.

But it doesn’t end there. In 2011, right before the UN conference on climate change, another 5,000 emails were leaked, and their release was dubbed Climategate 2.0. The emails were from 1995-2009 and they depicted a conspiracy to cover up more data that seemed to indicate that Global Warming may be a fraud internally, reported Forbes who called the emails incriminating.

“I also think the science is being manipulated to put a political spin on it which for all our sakes, might not be too clever in the long run,” Peter Thorne of the Met Office wrote.

An official at the Environment Department appeared to be pressuring researchers, “I can’t overstate the HUGE amount of political interest in the project as a message that the Government can give on climate change to help them tell their story. They want the story to be a very strong one and don’t want to be made to look foolish.”
In addition to the 5,000 emails, hackers also encrypted an additional 220,000 emails, but never released the key. Instead, they left a cryptic that said, “Every day nearly 16,000 children die from hunger and related causes, the rest, some 220,000, are encrypted for various reasons.”

The note added, “We are not planning to publicly release the pass phrase,” reported the NYTimes.

In 2012, Forbes reported that it was doctored data, not U.S. temperatures, that set the record that year.

Then, in 2013, climategate 3.0 happened when documents were released to the Associated Press that showed the government struggling to explain why global warming appears to have slowed down the past 15 years, even though greenhouse gas emissions kept rising.

That answer you can get from Phil Jones, the victim of the original climate gate and founding father of man-made climate change. “There is no statistically significant warming,” he said.

Again, these are the same people who were responsible for the IPCC’s conclusions. This is important because they served the scientific backbone of UN negotiations that ultimately lead us back to 2016 and the Paris Accord, which President Trump is so outspoken against.

They knowingly buried data that didn’t fit their model; you can read 10 years worth of the leaked emails here at Wikileaks.

The telegraph.co.uk reported in 2015 that fiddling with temperature data is the biggest science scandal ever.

Next, is the case of carbon emissions in which scientists, in 2014, warned that CO2 levels on plant growth had been underestimated by at least 16 percent and that carbon dioxide levels in the atmosphere are overstated, due to failure to take into account how plants absorb carbon dioxide, as reported.

The Carbon Dioxide Information Analysis Center or CDIAC will be shutting down, ceasing operations on Sept. 30, 2017 according to its website.

It’s also worth noting that while science tries to attribute Global Warming to carbon emissions, that, too, has been debunked.

Even The Weather Channel founder John Coleman and computer programmer E. Michael Smith have admitted that Global Warming is fraudulent. Further, forget that the 15 years since 2010 haven’t shown a warming period, the New York Times reported in 1989 that there hasn’t been a warming trend since 1895.

NASA is even alleged to be a part of the temperature cover up, according to Coleman, Smith and Dr. Friedrich-Karl Ewert, another German scientist, retired geologist and data expert.

But the conspiracy doesn’t end there, NOAA has had three separate weather satellites explode: NOAA 16, NOAA 13, and the Defense Meteorological Sattelite Program Flight 13. The NOAA 16 and The Defense Meteorological Satellite Program Flight 13 exploded during 2015 with the last NOAA 13 happening in 1993. All three were attributed to a faulty battery.

For even more information, Mike Brakey, an engineering physicist and heat transfer specialist, catches NOAA revising historic temperature data all the time on his blog.

Here is a blast from the past from our sister chapter, We Are Change Chicago, confronting Al Gore on his claims about Global Warming:

The Senate voted in 2015 on whether climate change is real or a hoax, and determined that it is real, and humans are not to blame.

With so many scandals heating up on Global Warming with various institutions and over 30,000 emerging scientists against the political agenda, it raises legitimate questions about why the agenda that climate change is not a natural occurrence has been promoted.

Forget our own planet’s cycle, this is happening all over the solar system on other planets as well, which don’t have any carbon producing factories or cars, so what is causing the climate change on other planets? Well, scientists are now blaming solar warming.