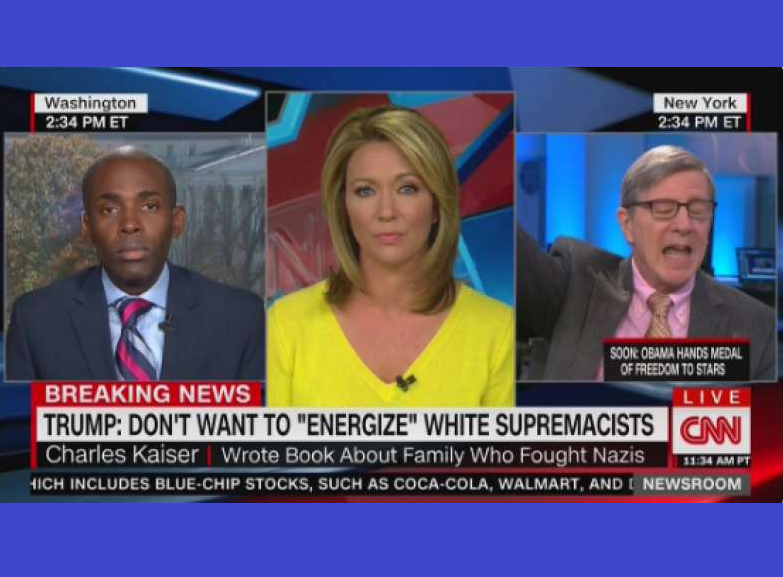 CNN contributor Charles Kaiser, a white anti-Donald Trump author, used the “n-word” while live on air with a black supporter of the president-elect.

Appearing on CNN Newsroom on Tuesday afternoon, Kaiser falsely asserted that Trump’s chief strategist and Executive Chairman of Breitbart News Stephen Bannon is a “man who uses the word n*gger.”

“If you don’t want to support the alt-right, don’t choose as a White House Counselor a man who uses the word n*gger, whose wife says that he did not want his daughters to go to a school with too many Jews, and don’t choose as an attorney general a man who calls the NAACP an un-American organization and who we learned in The Guardian today went so far as to prosecute –” Kaiser ranted.

Anchor Brooke Baldwin stopped him and let him know that it is not okay to use the n-word on her show, and was thanked by her other guest Paris Dennard, who happens to be a black Trump supporter.

Kaiser then racistly criticized Dennard, saying that it is “shameful” that a black man would support Jeff Sessions being picked for Attorney General.

“Sir, you don’t know why — you know what? I don’t question your allegiance to the people you support. I will tell you why I support Mr. Trump, who’s the President-elect, because I think he’s going to do good things for this country and particularly good things for my community,” Dennard responded.

At the end of the segment, Baldwin broke down in tears over Kaiser’s language, and asserted that she has never heard of anyone claiming that Bannon has used the n-word.

“The more I’ve sat here and listened to the fact that somebody used the ‘N-word’ – it is not okay. It is not okay, Charles Kaiser. I respect you, I enjoy having you as a guest — but not okay. By the way, the claim that Mr. Bannon used the ‘N-word,’ I’ve never heard of this, so there’s that. Take a break,” Baldwin said, looking straight into the camera.

Speaking to a Washington Post blog — in which the author continues to push racism smears against the president-elect and his team — Kaiser claims that he mistook Bannon for Sessions in his nationally televised rant.

“I do apologize for one thing in particular. I mistook Bannon for Sessions. I was mistaking the one for the other,” Kaiser said.

“There’s a part of me that feels you can’t fully express the shocking nature of the first appointments of Donald Trump without using the actual words used by these appointees,” he continued, though the word was only used by himself and not Bannon.

Baldwin has reportedly emailed Dennard a personal apology, though it is unclear if Kaiser has also reached out to him — or just to friendly bloggers who will back him up.

“I do not appreciate people who attack me for supporting Trump because I’m African-American. Because the President-elect has never said anything disparaging about the black community. If anything, he has been championing the least of these, in our community, who need the most attention — those who are suffering economically, those who are suffering under failed education systems,” Dennard told Breitbart.