White House Is Exploring Use Of Military Force Against North Korea 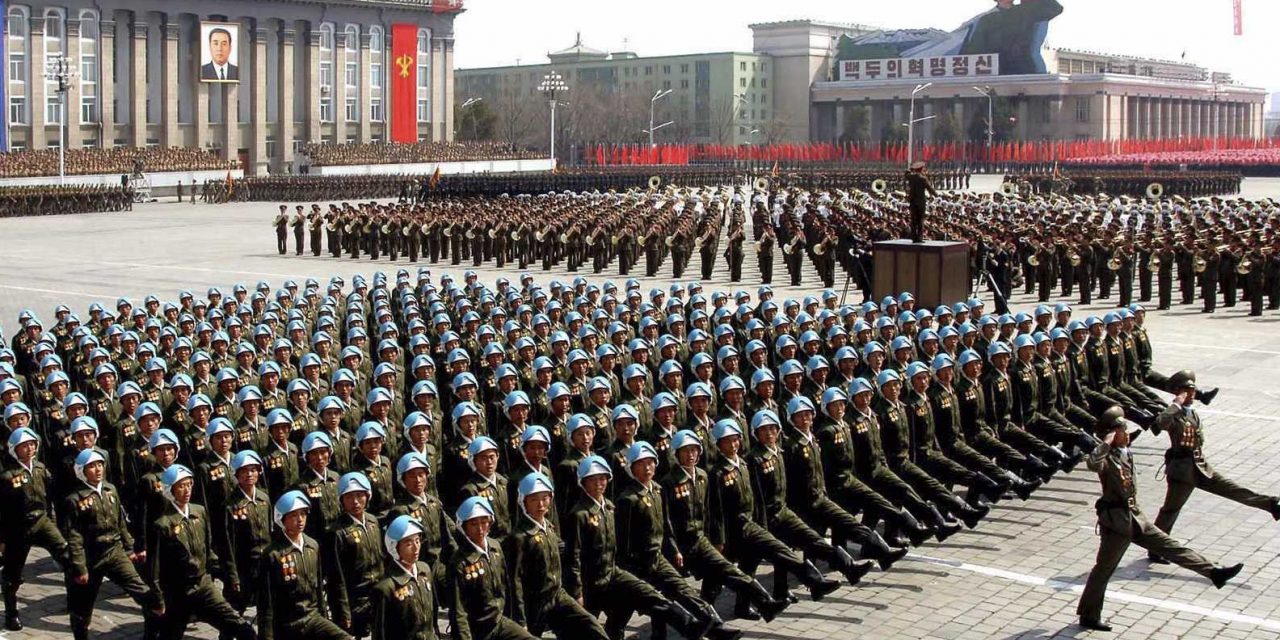 An internal White House strategy review on North Korean options includes the possibility of both military force and regime change to counter the country’s nuclear-weapons threat, the WSJ reports, a prospect that has some U.S. allies in the region on edge. The review comes amid recent events have strained regional stability including last month’s launch by North Korea of a ballistic missile into the Sea of Japan, and the assassination of the estranged half brother of North Korean leader Kim Jong Un in Malaysia.

The WSJ adds that U.S. officials have underscored the possible military dimensions of their emerging strategy in recent discussions with allies, suggesting that the planning is at an advanced stage.

President Trump has taken steps to reassure allies that he won’t abandon agreements that have underpinned decades of U.S. policy on Asia, his pledge that Pyongyang would be stopped from ever testing an intercontinental ballistic missile—coupled with the two-week-old strategy review—has some leaders bracing for a shift in American policy. During Japanese Prime Minister Shinzo Abe’s two-day summit in February with Mr. Trump, U.S. officials on several occasions stated that all options were under consideration to deal with North Korea, according to a person familiar with the discussions.

It was clear to the Japanese side that those options encompassed a U.S. military strike on North Korea, possibly if Pyongyang appeared ready to test an ICBM. The Japanese side found that scenario “worrisome,” he said.

The proposal emerged roughly two weeks ago, when Deputy National Security Adviser K.T. McFarland convened a meeting with national-security officials across the government and asked them for proposals on North Korea, including ideas that one official described as well outside the mainstream.

The request was for all options, ranging from U.S. recognition of North Korea as a nuclear state to military action against Pyongyang. Ms. McFarland’s directive was for the administration to undergo a comprehensive rethink of America’s North Korea policy.

The national-security officials reported back to Ms. McFarland with their ideas and suggestions on Tuesday. Those options now will undergo a process under which they will be refined and shaped before they’re given to the president for consideration.

In addition to concerns about US intervention, there is speculation that China may itself pre-empt a move by Washingont: the heightened prospect of U.S. military action in North Korea could encourage China, which fears the fallout of a military confrontation with its neighbor, to take steps Washington has long sought to choke off Pyongyang’s economic lifeline.

Another unknown is how South Korea will act. In the wake of Mr. Trump’s election, leaders in Tokyo and Seoul have sought to intensify the existing U.S. strategy of exerting economic and diplomatic pressure against North Korea. “We will make sure that the North changes its erroneous calculations by further enhancing sanctions and pressure,” South Korea’s acting President Hwang Kyo-ahn said in a speech on Wednesday.

The speech came on the same day that South Korea and the U.S. kicked off major annual military exercises, part of a long-running strategy of prioritizing defensive military preparedness to ward off North Korean aggression. As annual military exercises were set to begin, U.S. Defense Secretary Jim Mattis spoke Tuesday to South Korean Defense Minister Han Min-Koo, emphasizing that “any attack on the United States or its allies will be defeated, and any use of nuclear weapons will be met with a response that is effective and overwhelming,” said the Pentagon spokesman, Capt. Jeff Davis.

Finally, there is Japan, which is concerned it could get sucked into a regional conflict by a U.S. military strike on North Korea, said Tetsuo Kotani, a senior fellow at the Japan Institute of International Affairs, a Tokyo think tank. Another fear for Japan is a scenario in which the U.S. instead holds talks with North Korea and reaches a deal that would lead to Washington disengaging from the region, he said.

Japan, under its pacifist constitution, remains heavily dependent on U.S. military support, not only to counter North Korea, but also China, which has stepped up a territorial challenge against Japanese-administered islands in the East China Sea.

“Direct talks between Mr. Trump and Kim Jong Un would be a nightmare scenario for Japan,” Mr. Kotani said.

Trump has recently stated the U.S.’s commitment to defending both Japan and South Korea to leaders of both countries. A spokeswoman for Japan’s foreign ministry declined to comment on the details of Mr. Abe’s talks with Mr. Trump, while a spokesman for South Korea’s foreign ministry couldn’t be reached for comment.

Meanwhile, in yet another potential escalation point, the U.S. is in the process of installing advanced missile defenses, known as the Terminal High Altitude Area Defense system, or THAAD, in South Korea. As part of that, South Korea said this week that it has completed a transfer of land needed as a station for the system, Capt. Davis said. In response to this deployment, on Wednesday China and Russia announced they have agreed to intensify their opposition to the US’ controversial THAAD missile defense system.

“Both sides said they will continue to strengthen their coordinated opposition to THAAD (Terminal High Altitude Area Defense system),” the Chinese Foreign Ministry wrote on its website on Wednesday.

The statement follows a Tuesday meeting between China’s assistant foreign minister, Kong Xuanyou, and Russian Deputy Foreign Minister Igor Morgulov in Beijing. Russia’s Ministry of Foreign Affairs also released a statement, saying that “both parties emphasized that collective political and diplomatic efforts should be stepped up to ease tensions and initiate the process of military and political detente across the board in Northeast Asia, in order to create conditions conducive to resolving the nuclear issue, as well as other issue, on the Korean Peninsula.”

It comes after the South Korean government signed a land swap deal with retail giant Lotte on Tuesday, which will see the company exchange a golf course for military-owned land near Seoul. The golf course will become the future home of THAAD. THAAD is an advanced system designed to intercept short, medium, and intermediate-range ballistic missiles during their terminal flight phase. Equipped with long-range radar, it is believed to be capable of intercepting North Korea’s intermediate-range ballistic missiles.

China has repeatedly spoken out against THAAD over fears that it will undermine its own ballistic missile capabilities, and previously urged Seoul and Washington not to go ahead with the system’s planned deployment. 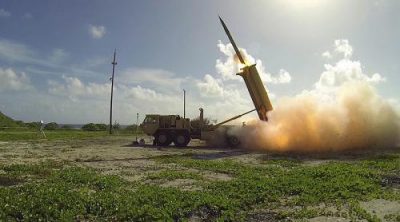 Ahead of the Tuesday signing of the deal, Chinese Foreign Ministry spokesman Geng Shuang warned of “consequences” against Washington and Seoul if the agreement were to go ahead, claiming the system “severely disrupts regional strategic balance and jeopardizes the strategic security interests of regional countries including China.”

China “will definitely take necessary measures to safeguard its security interests,” he said during a news briefing, adding that “all the consequences entailed will be borne by the US and the Republic of Korea.” Beijing has already taken measures which some claim are retaliatory against the deal, including halting Lotte’s multibillion dollar real estate project in China and canceling the visits of South Korean celebrities to the country.

As for Russia, the country previously urged those involved in the THAAD system to consider the escalated tensions it will inevitably cause. Last month, Moscow appraised the situation around the Korean Peninsula as “exhibiting a high likelihood of becoming volatile,” and emphasized the “counter-productiveness of the line being taken by certain governments in exacerbating these tensions and instigating an arms race in the subregion, as well as the increase in the scale of military drills.”

However, the US and South Korea maintain that THAAD is a defensive measure against Pyongyang. South Korean officials have said they expect the missile system to be deployed and operational this year, with one stating earlier this month that deployment could be completed by August.

And just like that, suddenly the very precarious peace in East Asia suddenly depends on the actions of an irrational dictator. While for now the US appears to be on the fence about a military intervention – or regime change – that will surely change should Kim Jong Un decide, unexpectedly, to launch another ballistic missile, something he is known to do with increasing frequency. Which means that suddenly the stability of a great part of Asia is in the hands of the man in the photo below. 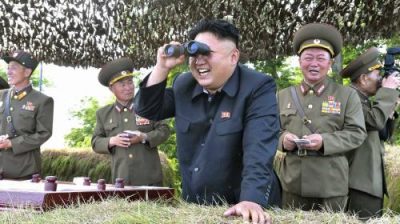