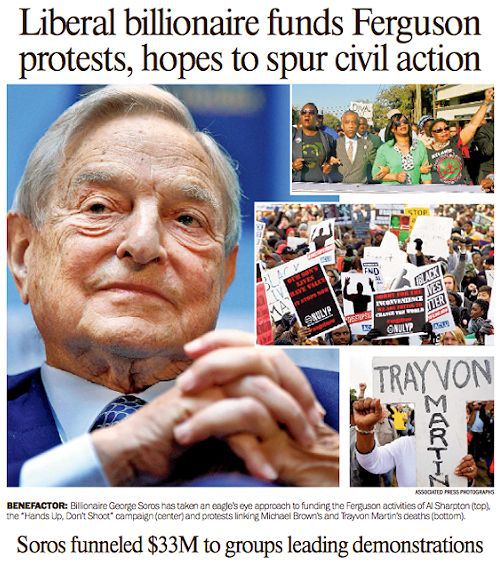 Protests are breaking out all over the U.S. against President-elect Donald J. Trump – just as John Podesta planned with George Soros for America revealed by Wikileaks to “control political discourse.”

Soros is the financial backer behind MoveOn.org, the political organization manufacturing the recent riots nationwide where “protestors” were bussed in to major cities in droves in reaction to Trump’s election.

Soros is the “regime change” man known to use nonprofits and puppet politicians to to push his agenda. Now Wikileaks has revealed John Podesta and George Soros’s plans for America.

In two similar documents entitled – “2008 COMBINED FUNDRAISING, MESSAGING AND MOBILIZATION PLAN” and “STRATEGIC OUTLOOK FOR THE 2008 ELECTIONS” attached to a November, 2nd, 2007 email, Podesta emailed Sarah Ehrman, one of the Clinton administration’s chief operatives in the Jewish community. Podesta forwards Ehrman memos in which he wrote to George Soros several suggestions for the 2008 election. Here is one of John Podesta’s great ideas that exposes both him and George Soros.

Control the political discourse. So much effort over the past few years has been focused on better coordinating, strengthening, and developing progressive institutions and leaders. Now that this enhanced infrastructure is in place—grassroots organizing; multi-issue advocacy groups; think tanks; youth outreach; faith communities; micro-targeting outfits; the netroots and blogosphere—we need to better utilize these networks to drive the content of politics through a strong “echo chamber” and message delivery system.

Many “protesters” have lost their mind and forgot the bigger picture of global players and special interests, feeling that the election of President Donald J. Trump is the evil worth protesting, while completely forgetting the organizations and think tanks that want to exploit this situation. “We need to better utilize these networks to drive the content of politics through a strong “echo chamber,” Podesta wrote.

Moveon.org is one such organization that is used as an “echo chamber.”

MoveOn.org was first formed in 1998 to oppose the impeachment of President Bill Clinton; it circulated an online petition titled “Censure President Clinton and Move On to Pressing Issues Facing the Nation.” It was co-founded by Joan Blades and Wes Boyd, a married couple from California.

During the 2004 presidential campaign, MoveOn.org was the seventh-largest 527 committee and spent $21 million, according to the Center for Responsive Politics. Initial donors included billionaire George Soros, a major donor to “liberal causes”, who spent millions trying unsuccessfully to defeat President Bush.

MoveOn.org closed its 527 committee in 2008. It now operates a federal political action committee, which must disclose its donors and cannot accept more than $5,000 from any single source. MoveOn.org PAC raised and spent $38 million in 2008. It had spent $21 million during the 2010 campaign cycle, as of August. The PAC funds Internet and TV ads, raises money for liberal candidates and causes, and finances grassroots campaigns.

The Moveon.org group also created a 501(c)(4) called MoveOn.org Civic Action in 2001, which has no donor limitations and is anonymous to donate, so any Democrat or Republican can donate anonymously.. See the problem? Essentially they are using a loophole – connecting a “nonprofit” to a PAC and 501(c)(4)  organization which does not have to disclose it’s donors and has no limits/restrictions on how much each individual anonymous donor can donate to MoveOn.org Civic Action. While donors are restricted to $5,000 if they were to donate to MoveOn.org itself.

Moveon.org uses this money to cover the cost of everything from printing up pre-made yellow and black signs, paying it’s organizers, online recruitment ads, training, and more. I wonder if this more includes busing in protesters? This was sent to me by Moveon.org back in March 2016.

“So here’s the plan: We’ll support MoveOn.org members to call out and nonviolently protest Trump’s racist, bigoted, misogynistic, xenophobic, and violent behavior — and show the world that America rejects Trump’s hate,” the email read. “And to keep it going, we’re counting on you to donate whatever you can to cover the costs of everything involved — the organizers, signs, online recruitment ads, training, and more.”

Now with that understanding, Moveon.org is the force behind the recent Trump protest/riots taking place across the country nationwide. Moveon.org is paying organizers to run “peaceful” protest but the devil lies in the details. See moveon.org and Soros don’t get in trouble for money spent on a protest that turns violent because they word it to be “peacefully organized.” When in reality Soros knows that by using Moveon.org he can achieve his goal of “controlling political dissidence” as said in the Wikileaks email. Here is moveon.org’s statement to Trump Protesters regardless they know that some people who show up are going to be violent.

Americans to Come Together in Hundreds Peaceful Gatherings of Solidarity, Resistance, and Resolve Following Election Results

Hundreds of Americans, dozens of organizations to gather peacefully outside the White House and in cities and towns nationwide to take a continued stand against misogyny, racism, Islamophobia, and xenophobia.

Tonight, thousands of Americans will come together at hundreds of peaceful gatherings in cities and towns across the nation, including outside the White House, following the results of Tuesday’s presidential election.

The gatherings – organized by MoveOn.org and allies – will affirm a continued rejection of Donald Trump’s bigotry, xenophobia, Islamophobia, and misogyny and demonstrate our resolve to fight together for the America we still believe is possible.

Within two hours of the call-to-action, MoveOn members had created more than 200 gatherings nationwide, with the number continuing to grow on Wednesday afternoon.

WHAT: Hundreds of peaceful gatherings of solidarity, resistance, and resolve nationwide

WHEN / WHERE: Find local gatherings here. Major gatherings include in New York City’s Columbus Circle and outside the White House in Washington, DC.

“This is a disaster. We fought our hearts out to avert this reality. But now it’s here,” MoveOn.org staff wrote to members on Wednesday. “The new president-elect and many of his most prominent supporters have targeted, demeaned, and threatened millions of us—and millions of our friends, family, and loved ones. Both chambers of Congress remain in Republican hands. We are entering an era of profound and unprecedented challenge, a time of danger for our communities and our country. In this moment, we have to take care of ourselves, our families, and our friends—especially those of us who are on the front lines facing hate, including Latinos, women, immigrants, refugees, Black people, Muslims, LGBT Americans, and so many others. And we need to make it clear that we will continue to stand together.”

It works like this – the elite set the policy, push the narrative – such as Trump supporters are “racist misogynists” – fund movements like George Soros who has been exposed funding BLM to expand the police and the Ukrainian conflict and the list goes on and on with his shady ventures.

Then the media finalizes the narrative with puppets that are owned by the elite, because mainstream media outlets have to go through an editorial board to get their stories approved first – but its not working anymore. The public isn’t being played like a pawn and frankly the dinosaur media are now just exposing themselves. With an all time low trust in the media at 6% from early 2016 we often wonder what the mainstream media’s trust rating is after dumb stunts like CNN putting their own cameraman on as a protester to shape the narrative for Hillary and push a Soros funded protest against Donald Trump and to attempt to shape the situation with such horrible acting.

And of course the Wikileaks emails revealed collusion with many mainstream press reporters that went to a dinner hosted by Hillary and her campaign big time lobbyist John Podesta exposed by Abby Martin.

Once well informed people are now pushing for riots in major cities, ignoring that this is all apart of the global plan, that once-labeled “conspiracy theory” of the globalist desire for the NEW WORLD ORDER.

Before Trump’s first day in office people are already rioting, ignoring the policies he presented that would decimate the elite if he follows through with them and is actually not another puppet for the elite and lobbyists like Podesta who have destroyed this country and others.  We can only hope Trump is legit, but if he’s not you can bet your ass we will be the ones exposing him as a fraud. Holding government officials accountable is the job of journalists – not being the government’s lapdog. This dog doesn’t sit, lay, or stay. I bite, and I bite back hard.