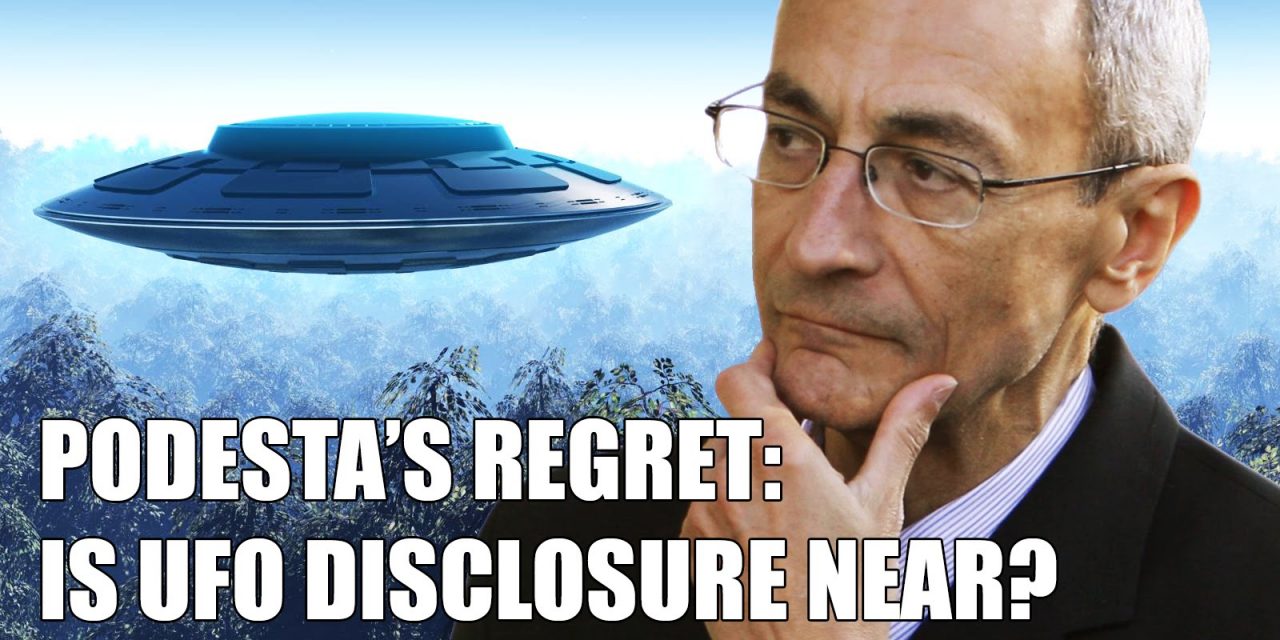 Wikileaks released the Podesta Emails, 2,000 emails leaked that talk about everything from Goldman Sach’s speeches to X-Files conversations between John Podesta, Edgar Mitchell, and former Blink 182 guitarist Tom DeLonge, talking about Alien life and sources within the government who hold this information. 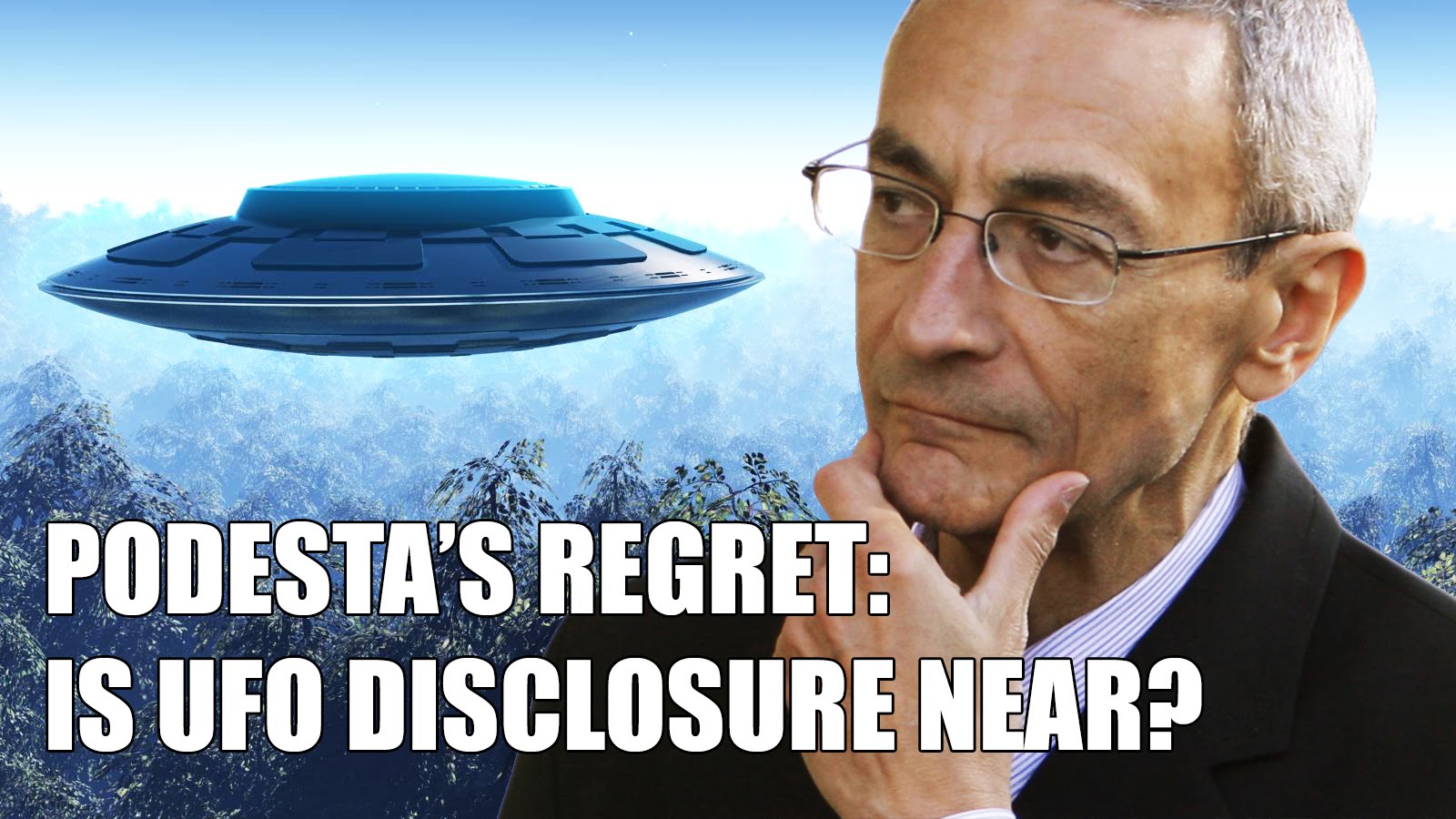 John Podesta and Edgar Mitchell are both prominent, credentialed individuals of the disclosure movement that advocate the public disclosure of the Extraterrestrial presence that has been visiting this planet for centuries, a well kept secret by many presidents and international world leaders alike. It has now spread to include hundreds of whistle-blowers from military to intelligence agencies worldwide, ready to blow the lid off the greatest cover up mankind has ever seen, that we are indeed not alone in this vast universe and our governments have conspired to keep it secret under “National Security.”

Astronaut Edgar Mitchell is caught talking to John Podesta in a leaked email in which the both of them were worried about a war breaking out in space and apparently they planned to have a conversation via Skype about the ramifications of it.

“Because the War in Space race is heating up, I felt you should be aware of several factors as you and I schedule our Skype talk. Remember, our nonviolent ETI from the contiguous universe are helping us bring zero point energy to Earth. They will not tolerate any forms of military violence on Earth or in space.”

In another leaked email Edgar Mitchell also talks about the Vatican knowing about the Extraterrestrial presence Mitchell writes.

“My Catholic colleague Terri Mansfield will be there too, to bring us up to date on the Vatican’s awareness of ETI.”

John Podesta tweeted before leaving the Obama administration “My biggest failure was not securing the #disclosure of the UFO files.” Are we getting to see the under belly of secrecy that was Podesta’s biggest failure?

Additionally, in another email exchange with Tom Delonge in 2015, Tom Delonge wrote John Podesta about sources he claimed were “both in charge of a most fragile division that relates to classified science and DOD topics” adding they were “worth our time.”

“I think you will find them very interesting, as they were principal leadership relating to our sensitive topic. Both were in charge of most fragile divisions, as it relates to Classified Science and DOD topics. Other words, these are A-Level officials. Worth our time, and as well the investment to bring all the way out to you,”

In another leaked email from 2016, Mr. DeLonge writes he has “been working with another former military official.”

“He just has to say that out loud, but he is very, very aware- as he was in charge of all of the stuff. When Roswell crashed, they shipped it to the laboratory at Wright Patterson Air Force Base. General McCasland was in charge of that exact laboratory up to a couple years ago,” Mr. DeLonge wrote,

Delonge referred to the Roswell Incident that was first reported as a saucer first with dead Alien Bodies then that was retracted and it was then a weather balloon with crash dummies, yes crash dummies, absolutely unbelievable.  Although former CIA Director Admiral Roscoe Hillenkoetter said to the NY Times, the Inspectors General Called “UFOs serious business” years later in the 1960s.  That PDF in which the Inspectors General said UFO’s were serious business can be viewed here.

Wikileaks has additionally previously leaked cables in which world leaders have talked about Extraterrestrial life.

If it’s not obvious by now that we are not alone you need to study “Rendlesham Forest Colonel Charles Halt Tapes“, “Roswell“, “The Battle Of Los Angeles“, “Phoneix Lights“, “Jerusalem UFO“, “Whitehouse fly over“, and here watch this compilation of NASA UFO videos too from the STS to ISS. It’s quite apparent that we are not alone in the universe and if that’s not enough for you, several ex NASA astronauts and Military, Intelligence officials and pilots have tried to come forward with the Disclosure project. Are you paying attention now? Space program manager Wayne Hale has previously admitted that NASA “has been chasing these objects for many many years, rarely able to pinpoint where they came from and always finding out that they didn’t pose us any hazard.”

For fuck sake, the FBI has declassified a document which military personnel concluded a number of shocking conclusions about UFOs that document is below. Former Legislator Henry W. McElroy, Jr has alleged that Eisenhower met with Extraterrestrials, another CIA officer on his deathbed came out in 2013 and his story matches up with Henry McElroy’s story. Timothy Good, a pentagon consultant has also claimed that Eisenhower had a meeting with Extraterrestrials. That’s three different people within years apart of each other who all say that Eisenhower met with Extraterrestrials. They aren’t the only officials that claim that world leaders have already had first contact Retired, NATO Command Sergeant Major, Robert O. Dean has claimed “the Annunaki met with our leaders in 1954.” Then you have whistle-blowers who allege to show ET life forms like Lockheed Martin’s, Boyd Bushman who shows an alleged picture of an ET life form on his deathbed.

1. Part of the disks carry crews, others are under remote control
2. Their mission is peaceful. The visitors contemplate settling on this plane
3. These visitors are human-like but much larger in size
4. They are not excarnate Earth people, but come from their own world
5. They do NOT come from a planet as we use the word, but from an etheric planet which interpenetrates with our own and is not perceptible to us
6. The bodies of the visitors, and the craft, automatically materialize on entering the vibratory rate of our dense matter
7. The disks possess a type of radiant energy or a ray, which will easily disintegrate any attacking ship. They reenter the etheric at will, and so simply disappear from our vision, without trace
8. The region from which they come is not the “astral plane”, but corresponds to the Lokas or Talas. Students of esoteric matters will understand these terms.
9. They probably can not be reached by radio, but probably can be by radar. if a signal system can be devised for that (apparatus) 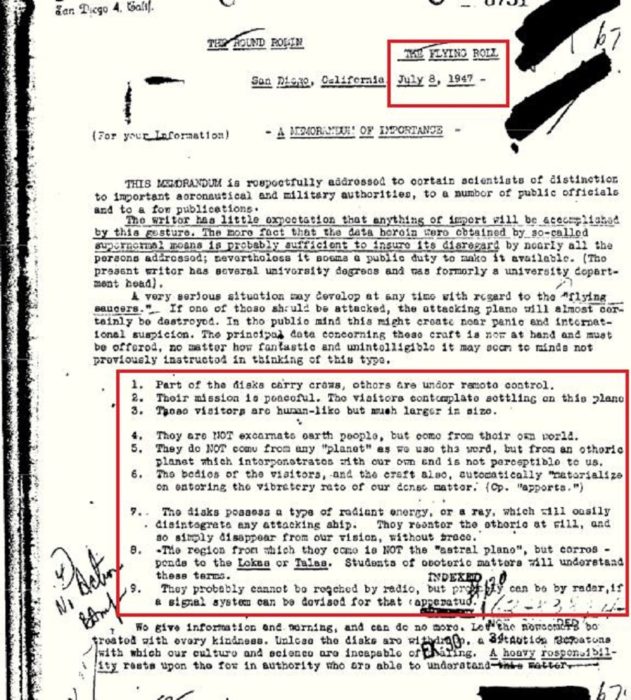 If you still need more, Victor Viggiani, a disclosure advocate leaked NORAD documents talking about UFO activity last July. Disclosure is picking up at a quickening pace, the truth can’t be stopped it’s like a tsunami, coming full speed to knock down the veil of secrecy. Just one question will blow the cover up out of the water, if NASA exists and it’s not a civilian agency as whistle-blower NASA engineer Clark McClelland, who has been apart of more then 800 NASA missions on record, has said why does the Navy Space Command exist? As such then the next dot to connect is hacker Gary Mckinion’s claim he found a list of off-planet space ships when he hacked into NASA and the DoD. As security clearance agreements expire more and more whistle-blowers will come forward. Could these leaked images from a U.S. submarine in 1971 be circumstantial evidence that Extraterrestrial life exist? The French MoD ‘contacted’ aliens during Steven Greers CE5 experiment  and he’s not the only one, two unknown men made UFO orbs appear out of nowhere, one happened during a live news broadcast which shocked the reporter who was at first mocking him. An old video from Oliver’s Castle shows a Crop Circle being made by an energetic orb of light. That video was tested for digital editing and was ruled to be clean of any type of editing tools of that time by digital editing experts.

Let us know what you think in the comment section below about all this and more and feel free to add to the content provided and connect dots of your own. Together We Are Change and we can win this information war to quote Ex Canadian Defense Minister Paul Hellyer. “The American people have a right to know what’s been going on because they are apart of it.”

“there is abundant evidence that we are being contacted, that civilizations have been visiting us for a very long time. That their appearance is bizarre from any type of traditional materialistic western point of view. That these visitors use the technologies of consciousness, they use toroids, they use co-rotating magnetic disks for their propulsion systems, that seems to be a common denominator of the UFO phenomenon.”