Update (1301 ET): Politico’s Lara Seligmandit reports Gen. Hokanson, chief of the National Guard Bureau, said the US Department of Defense had approved a plan to increase Guard troops in the Washington Metropolitan Area by 9,000, for a total of 15,000 to support the inauguration.

BREAKING: Gen. Hokanson, chief of the National Guard Bureau, says DOD has been authorized to provide up to 15,000 guardsmen to support the inauguration.

Deployment of Guard troops in DC come in the wake of deadly riots at the Capitol building last Wednesday and ahead of the Presidential Inauguration on Jan. 20 that could incite another wave of violence.

In a separate report, ABC News cites a report from the FBI that armed protests are being planned at all 50 state capitols ahead of Jan. 20. The agency notes far-right, anti-government, Boogaloo group, could be planning violence ahead of the inauguration.

ABC’s Aaron Katersky said the FBI has “received information about an identified armed group intending to travel to Washington, DC on Jan. 16. They have warned that if Congress attempts to remove POTUS via the 25th Amendment a huge uprising will occur.”

Katersky said, “A group is calling for “storming” state, local, and federal government courthouses and administrative buildings in the event President Trump is removed prior to Inauguration Day.”

As no less than 6,000 National Guard troops arrive in the Washington Metropolitan Area within the next 24 hours to beef up security around the US Capitol complex, moments ago the National Parks Service said that it was “temporarily” closing the Washington Monument and other public spaces in DC due to “credible threats to visitors and park resources” as “groups involved in the Jan. 6, 2021 riots at the US Capitol continue to threaten to disrupt the 59th presidential inauguration on Jan. 20.”

The shutdown will begin on Jan 11 and will remain in effect through Jan 24, “but may be extended if conditions persist.” The Park service explained that the “temporary closures are not of a nature, magnitude or duration that will result in a ‘significant alteration in the public use pattern’.”

It was unclear how the Park Service had determined that the those involved in the Jan 6 riots remains “credible threats.”

The full statement is below. 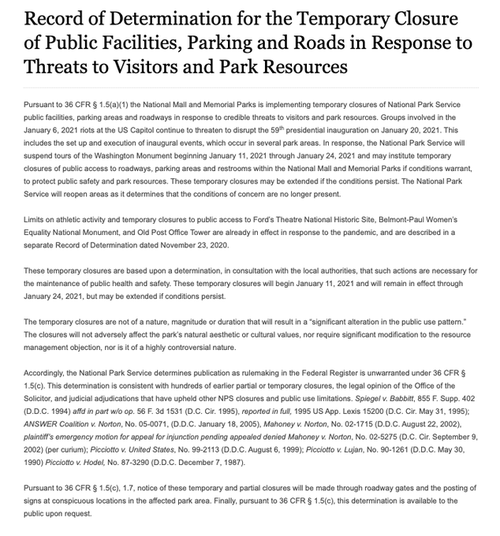