Every year, the world’s richest and most powerful business executives, bankers, media heads, academic thought leaders, and politicians gather behind closed doors and discuss how to shape the world while perpetuating a status quo that has been highly beneficial for a select few. We are talking, of course, about the annual, and always super secretive, Bilderberg meeting.

The 68th Bilderberg Meeting is already underway in Washington, D.C., which began on Thursday and will continue through Sunday.

Multi-time participant Dutch Prime Minister Mark Rutte is back at Bilderberg, and he’s here in D.C. with his foreign minister, Wopke Hoekstra. pic.twitter.com/INtVvL329B

Fence is now closed outside the Mandarin Oriental after journalist arrives and walks onto the property while filming pic.twitter.com/4NETswfbGG

Pfizer CEO Albert Bourla, former Google CEO Eric Schmidt, Henry Kissinger, and CIA Director William J. Burns are among the 120 invitees (click here for the full list) this year from 21 countries… though not many Russians.

Bilderberg prides itself for enforcing the Chatham House Rule,  according to which participants are free to use all the precious information they wish because those who attend these meetings are bound to not disclose the source of any sensitive information or what exactly was said. That helps ensure Bilderberg’s legendary secrecy – the reason for myriad conspiracy theories. But, as Pepe Escobar notes, that does not mean that the odd secret may not be revealed.

According to the group, this is the lineup of topics to be discussed:

As can be seen, the members (two thirds of the participants from Europe and the rest from North America) will be discussing (plotting?) ways to manage the emergence of a bipolar world. Also, the agenda appears to be a direction away from freedom as the group will discuss plans to combat “Disinformation,” or elites silencing their opponents.

The lead topic through the weekend will be “Geopolitical Realignments” following the Russian invasion of Ukraine. The second is “NATO Challenges” and likely how European members will deter Russian aggression. And the third is China, as Beijing threatens to invade Taiwan.

Ultimately, what is decided will never see the light of day, though it will emerge as official policy that helps serve the Bilderberg elite. And if history is any indicator, it will only worsen the current global situation.

“If the Bilderberg Group is not a conspiracy of some sort, it is conducted in such a way as to give a remarkably good imitation of one,”

– C. Gordon Tether, a writer for the Financial Times, once opined in May 1975.

And here’s how the Bilderberg Group controls the world. 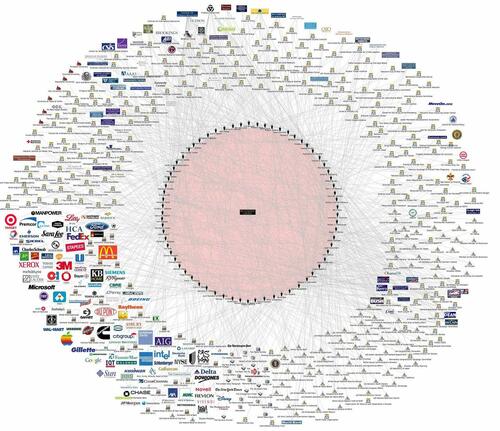 The CEO of Pfizer, the head of the CIA, the Director of the NSC, the VP of Facebook, the King of Holland and the Secretary General of NATO are all secretly meeting right now behind closed doors in DC.

It's called Bilderberg, & not a single major media outlet has reported on it.

Since the group of elites has been meeting regularly for decades, we’re sure the events over the last few years have nothing to do with them.

Finally, we note Alastair Crooke’s belief that the beginning of the end of the Bilderberg/Soros vision is in sight.

The Old Order will cling on, even to the last of its fingernails. The Bilderberg vision is the notion of multi-cultural, international cosmopolitanism that surpasses old-time nationalism; heralding the end of frontiers; and leading toward a US-led, ‘technocratic’, global economic and political governance.

Its roots lie with figures such as James Burnham, an anti-Stalin, former Trotskyite, who, writing as early as 1941, advocated for the levers of financial and economic power being placedin the hands of a management class: an élite – which alone would be capable of running the contemporary state – thanks to this élite’s market and financial technical nous. It was, bluntly, a call for an expert, technocratic oligarchy.

Burnham renounced his allegiance to Trotsky and Marxism, in all its forms in 1940, but he would take the tactics and strategies for infiltration and subversion, (learned as a member of Leon Trotsky’s inner circle) with him, and would elevate the Trotskyist management of ‘identity politics’ to become the fragmentation ‘device’ primed to explode national culture onto a new stage, in the Western sphere. His 1941 book, “The Managerial Revolution,” caught the attention of Frank Wisner, subsequently, a legendary CIA figure, who saw in the works of Burnham and his colleague a fellow Trotskyite, Sidney Hook, the prospect of mounting an effective alliance of former Trotskyites against Stalinism.

But, additionally, Wisner perceived its merits as the blueprint for a CIA-led, pseudo-liberal, US-led global order. (‘Pseudo’, because, as Burnham articulated clearly, in The Machiavellians, Defenders of Freedom, his version of freedom meant anything but intellectual freedom or those freedoms defined by America’s Constitution. “What it really meant was conformity and submission”).

In short, (as Paul Fitzgerald and Elizabeth Gould have noted), “by 1947, James Burnham’s transformation from Communist radical, to New World Order American conservative was complete. His Struggle for the World, [converted into a memo for the US Office of Strategic Services (OSS, the forerunner of CIA)], had done a ‘French Turn’ on Trotsky’s permanent Communist revolution, and turned it into a permanent battle plan for a global American empire. All that was needed to complete Burnham’s dialectic was a permanent enemy, and that would require a sophisticated psychological campaign to keep the hatred of Russia alive, “for generations”.

Still, as Charlie Skelton previously wrote, the biggest ethical question faced by the summit is not whether to milk the madness of war for profit. Bombing and rebuilding countries, missiles and debt, that’s all fine: that’s just how neoliberalism works. What’s tougher to justify, within a democratic framework, is the practical process whereby conflicts are being debated, behind closed doors, by top policymakers in concert with billionaire industrialists and private sector profiteers. The prime minister of the Netherlands discussing global flashpoints in luxurious privacy with the CEO of Royal Dutch Shell and the chairman of Goldman Sachs International. It’s horrible optics.