A whistleblower who’s fled the United States for Switzerland has vowed to drop ‘450 gigabytes of deleted material‘ from Hunter Biden’s abandoned laptop, which he says he also gave the the Washington Post, New York Times, and Sen. Chuck Grassley – all of whom he says sat on it for months.

For the past two weeks, former Steve Bannon War Room co-host Jack Maxey has been hiding in Zurich, where he told the Daily Mail he’s been working with IT experts to dig more data from Hunter’s ‘laptop from hell,’ and that he’ll post it all online in a searchable database in the coming weeks.

“I came here so that we could do a forensic examination of Hunter’s laptop safely in a country that still respects human liberty and the ideals of liberal democratic principles,” he told the Mail. “I do not believe this would have been possible inside the United States. We had numerous attempts on us from trying to do things like this there.”

Maxey said that after contacting DailyMail.com about the laptop last year, black suburban SUVs appeared outside his house, and former US intelligence officer friends he shared copies with told him they received strange calls.

‘I showed this to a friend of mine in desperation in February [2021] because nobody would listen to me. No news organizations would take it. In fact, the very first major news organization to take it was the Daily Mail,’ he said.

‘Very dear friends of mine, the sharp tip of the spear, were making welfare calls to me every day, basically to see if I was still alive.‘ -Daily Mail

One former intelligence agency senior staffer allegedly told Maxey after he received the hard drive two years ago “If you don’t release enough of this, so that they know you can release all of it, I’m telling you brother, you’re a dead man.” 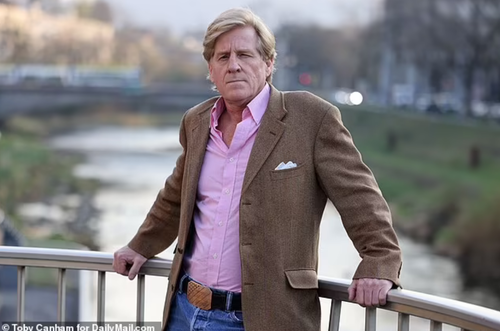 After receiving this advice, he began posting caches of emails and other material from the laptop on various file sharing sites – only to find the links removed within an hour.

“There were five drop boxes: two in the United States, one in New Zealand, two in the UK. All the same drop boxes in which they tell us child pornography is shared around the globe without any consequence because they can’t look at it,” he said, adding: “These are all Five Eyes countries, English speaking countries in an intelligence sharing agreement. And they were all ripped down.”

“??So this means that our intelligence services, who still have not even acknowledged that they have Hunter Biden’s laptop, were obviously diligently doing cache searches across the internet to find out if any of this stuff was being released. That should terrify every single decent person in the West.”

Emails between Hunter and Eric Schwerin, his business partner at consultancy Rosemont Seneca, show Schwerin was working on Joe’s taxes. The emails were recovered from Hunter’s laptop

According to Maxey, he went to Switzerland because they are home to the only file sharing site that didn’t nuke the laptop files – Swiss Transfer.

The former Bannon podcast co-host said he is livid at the FBI, who he believes slow-walked their investigation into Hunter and failed to enter the laptop they received from Mac Isaac into evidence for months.

According to the New York Times, files from the laptop are now part of the evidence in Hunter’s federal prosecution for alleged tax fraud, money laundering and illegal foreign lobbying.

Among the files on the laptop are a raft of emails and documents showing Hunter’s dealings with Burisma, a Ukrainian gas firm that became the center of Trump’s first impeachment in December 2019.

The then-president was accused of pushing Ukrainian president Volodymyr Zelensky to announce investigations into the Bidens and Burisma for alleged corruption. -Daily Mail

“The FBI had this on the ninth of December 2019,” said Maxey. “‘I suppose the first person betrayed was a sitting US president in an impeachment hearing, when the FBI had the exculpatory evidence in their hands to have that end instantly, and they did nothing.”

“The second group of people to be betrayed were all of the Democratic candidates in the spring primaries that year,” he continued. “The American people were utterly betrayed, because I guarantee you that Joe Biden couldn’t run for dog catcher if the American people knew about this laptop.”