Accused ‘Oath Keeper’ Denies All Charges, Claims to Be Ex-FBI With Top Secret Clearance for Decades

A Virginia man accused of helping to ‘plan and coordinate’ the January 6th Capitol breach claims he’s not a member, much less a leader, of the Oath Keepers – a group commonly described in the press as ‘far-right’ extremists – and that he wasn’t at the Capitol on January 6th due to what his attorney described as “physical limitations” that would have prevented his travel in the first place.

In a Monday court filing, 66-year-old Thomas Caldwell also claimed he’s held a top-secret security clearance since 1979, ran a consulting firm that did classified work for the US government, and worked as a FBI section chief from 2009 to 2010 – a job the Associated Press says typically requires ‘rising through the ranks of the bureau.’

Thomas Caldwell, who authorities believe holds a leadership role in the extremist group, worked as a section chief for the FBI from 2009 to 2010 after retiring from the Navy, his lawyer, Thomas Plofchan, wrote in a motion urging the judge to release him from jail while he awaits trial.

The defense said Caldwell, who has denied being part of the Oath Keepers, has held a top-secret security clearance since 1979, which required multiple special background investigations, according to Plofchan. Caldwell also ran a consulting firm that did classified work for the U.S. government, the lawyer said.

Caldwell’s lawyer said his client retired as a lieutenant commander with the Navy and that he was a “100% disabled veteran.” Caldwell suffered from complications related to a “service-connected injury,” including shoulder, back and knee issues, the attorney said. In 2010, Caldwell had spinal surgery, which later failed and led to chronic spinal issues and a diagnosis of post-traumatic stress disorder, according to the court filing. -Associated Press

“Moving, sitting for extended periods of time, lifting, carrying, and other physical activities are extremely painful and Caldwell is limited in his ability to engage in them,” Caldwell’s motion seeking pre-trial release continues.

Caldwell was arrested at his Berryville, VA home on January 19 after being accused of conspiring “to forcibly storm the US Capitol.”

Authorities claimed in charging documents to have connected Caldwell and two other individuals, Donovan Crowl and Jessica Watkins, to the Oath Keepers through “social media messages, photos and video,” where they allegedly arranged hotel rooms in DC days before the incident. In another message, Caldwell is allegedly referred to as “commander.” An FBI witness also referred to a “Commander Tom” which investigators believe refers to Caldwell.

Charging documents show messages between Caldwell and the others about arranging hotel rooms in the Washington area in the days before the siege. In one Facebook message from Crowl to Caldwell, Crowl states: “Will probably call you tomorrow … mainly because … I like to know wtf plan is. You are the man COMMANDER.”

The FBI wrote that Caldwell is believed to have referenced the leader of the Oath Keepers, Elmer Stewart Rhodes, in a Facebook message to group members in the days before the riot.

“I don’t know if Stewie has even gotten out his call to arms but it’s a little friggin late,” Caldwell wrote, according to the FBI. “This is one we are doing on our own. We will link up with the north carolina (sic) crew.” –Associated Press, Jan. 19

Caldwell also allegedly posted a Facebook video, followed two minutes later with the comment “Us storming the castle. Please share. Sharon was right with me! I am such an instigator! She was ready for it man! Didn’t even mind the tear gas.” 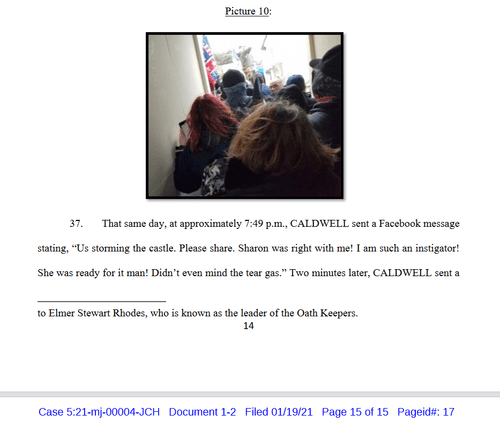 He then posted two minutes later: “Proud boys scuffled with cops and drove them inside to hide. Breached the doors. One guy made it all the way to the house floor, another to Pelosi’s office. A good time.”

Authorities also claim the Oath Keepers communicated during the Capitol riot about the whereabouts of lawmakers – with Caldwell allegedly having received a message that read: “all members are in the tunnels under the capital,” and “Seal them in turn on gas.”

“Tom all legislators are down in the Tunnels 3floors down,” read another message, and “go through back house chamber doors facing N left down hallway down steps.”

Roughly 200 people including Caldwell have been charged with federal crimes related to the January 6 incident, ranging from disorderly conduct and assault to disrupting Congress. According to the report, a special group of prosecutors is considering whether to bring sedition charges.

The Oath Keepers, founded by Yale Law graduate Stuart Rhodes, bills itself as an association of non-partisan current and former military officers, cops and first responders and notably provided disaster relief to Texas, Louisiana and Puerto Rican hurricane victims. They also have a policy to physically remove any white supremacists from their rallies.

Of note, on January 13, one week after the Capitol Riot, US intelligence agencies warned that violent extremists with “political grievances” will likely pose the “greatest domestic terrorism threats in 2021.”

Two weeks later, we found that one of the leaders of the Proud Boys, a group roundly labeled a “far-right extremist group” by the media and recently designated a terrorist entity by Canada, was a ‘prolific’ FBI informant who was notably ordered to stay away from Washington D.C. one day before the January 6 Capitol riot after he was arrested on vandalism and weapons charges. Several members of the Proud Boys leadership were taken down after the ‘insurrection.’