Blue-check mark gatekeepers, journalists, bots, pundits and even government officials are out in force, angrily reacting to Elon Musk’s Monday tweet which merely explored the possibilities for peaceful resolution in Ukraine.

Musk offered a Ukraine-Russia peace proposal, and encouraged his followers to vote on whether they think it’s a good idea or not, proposing a “redo” of referendums for the four annexed regions of eastern Ukraine which Vladimir Putin declared part of the Russian Federation last week. It would also be conditioned on Ukraine remaining neutral vis-a-vis future NATO membership.

He followed by saying the above conditions for ceasefire and peaceful settlement is “highly likely to be the outcome in the end” anyway regardless of how much it infuriates people ready to back Ukraine at all costs. As Musk noted, it remains “just a question of how many die before then.”

Within a couple of hours after the poll going live, which by then reflected almost 40% saying “yes” and just over 60% voting it down, Musk said it is being attacked by bots.

Ukrainian diplomats among others, such as Kiev’s ambassador to Germany, lashed out… “Fuck off is my very diplomatic reply to you,” said Ambassador Andrij Melnyk.

The poll and proposed “Ukraine-Russia peace” idea even caught the attention of Ukrainian President Volodymyr Zelensky.

Zelensky sarcastically offered his own poll, which strangely framed the whole thing as some sort of popularity contest, asking his over six million followers whether they would like Elon better if he “supports Ukraine” or “supports Russia” – despite obviously that Elon’s original tweet and poll did nothing to express “support” for Russia. 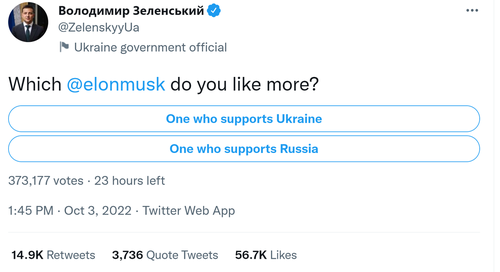 But then as some pointed out, Zelensky questioning Elon’s support for the “right” side of the war is a bit ironic and rich when one considers…

I like the Elon that supports peace and is against Nuclear War. We know which Elon you supported when he hooked you up with Starlink..https://t.co/WGbgMHi0NA

Some have pointed out what’s clearly going on with the continued pile-on:

The fact that @elonmusk could be attacked as “pro-Russian” merely for suggesting a possible peace deal — even though he gave Starlink to the Ukrainian war effort — shows how warped and intolerant the public conversation has become.

At one point Musk engaged some of his irate (perhaps now former) fans who pointed out that he risked enraging many Ukrainians.

Musk responded, “You are assuming that I wish to be popular. I don’t care. I do care that millions of people may die needlessly for an essentially identical outcome.”

Undeterred, Musk doubled-down and offered another poll, highlighting the difficult question of democratic outcomes in the longtime pro-Kremlin and Russian-speaking Donbas. He also pinned a tweet underscoring the zero sum nature of continued build-up and escalation which will only result in “devastating” huge amounts of death.

Let’s try this then: the will of the people who live in the Donbas & Crimea should decide whether they’re part of Russia or Ukraine

“If you care about the people of Ukraine seek, seek peace,” Musk said.

Naturally, this too resulted in an avalanche of hate mail and responses basically accusing the billionaire businessman of somehow being a pro-Kremlin stooge.

Bloomberg has observed that Musk’s tweets are “drawing the wrath of Ukrainians” for his proposing a negotiated solution which would involve ceding Crimea for good, and for suggesting that citizens in occupied areas should “decide if they want to live in Russia or Ukraine,” per the report.

Just the evening prior, journalist Michael Tracey pointed out the following, which is aptly demonstrated in Monday’s Elon Musk Ukraine Twitter controversy…