Americans Are Fleeing Lockdowns, When They Can Afford It

For nearly a year, governments have been instructing people to stay put. Don’t leave your home unless you have to. Forget about organizing or attending events. Weddings and funerals are too great a risk for spreading disease. And so on it goes.

But not everywhere is this the case. Many states are open, some are still shut, and many others fall somewhere in between. In some places in the United States, life feels almost normal.

Might we predict a shift in population from lockdown states to open states? According to North American Moving Services, Americans are still on the move at high rates that compare with 2019, despite or maybe because of all the edicts.

Consider the top five cities that people are leaving: New York, New York; Anaheim, California; San Diego, California; Chicago, Illinois; and Riverside, California. All five of those cities remain even to this day in stringent lockdowns. Indoor dining in California is not permitted, and will only be permitted in Chicago starting next week. New York is still in lockdown, despite Andrew Cuomo’s call for the city to be reopened.

And where are people moving to? The top five destinations are: Phoenix, Arizona; Houston, Texas; Dallas, Texas; Atlanta, Georgia; and Denver, Colorado. Georgia was the first state to reopen following the panicked lockdowns of March 2020. Arizona and Texas opened in July.

The point is even clearer when you consider the states gaining and losing residents. Illinois, New York, and New Jersey – all with extreme stringencies – are losing residents faster than any other states. Northeastern states make up four out of the seven states, with California now fourth on the list. They are moving to Idaho, Arizona, Tennessee, South Carolina, and North Carolina. 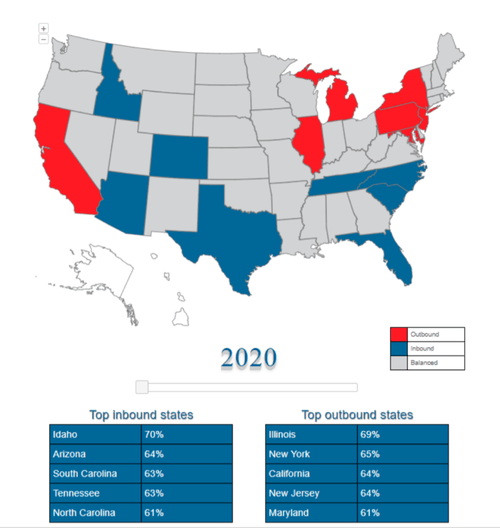 These population shifts have contributed to a dramatic spike in single-family home construction.

In addition, a Gallup survey reports that “nearly half of all U.S. adults said they’d prefer to live in a small town or rural area in 2020. That’s a nine percentage-point increase from 2018, when just 39 percent of respondents said the same.” Which is to say we might only have begun to see these shifts, as people lose confidence in mayors and governors that thought so little of their people’s lives and liberties as to treat them like nonvolitional players in an agent-based model.

To be sure, the people who are able to grab their laptop and go have the financial means to make the move, and the kind of job that can be performed remotely. Good for them. But not everyone is in such a position. Some people are stuck where they are, even if their own governments shut down their place of employment.

The lockdowns have in fact massively redistributed both wealth and happiness from the middle class and the poor to the wealthiest and most privileged, precisely as many of us predicted since March of 2020. I’ve called lockdownism the new feudalism.

A survey conducted by the MorningConsult reveals an astonishing upheaval that is massively skewed by education and income. The only group consistently reporting a lack of misery in 2020 were those with incomes above $100K and also those with postgraduate educational credentials. Those in suburbs and rural areas with no college, making less than $50K, and especially women in general report dramatically worsening mental, physical, financial, and professional health. Talk about inequality. The lockdowns supercharged it.

There is nothing surprising at all about any of these data. They were predicted early on. The destructive effects of lockdowns (including mass quarantines, business closures, and an end to public events) have been known for 100 years since they failed so miserably in 1918 when attempted even on a limited scale. That is precisely why public health rejected all these “nonpharmaceutical interventions” for a full century, until somehow some people forgot and attempted them anyway, with gravely calamitous results.

Now we are seeing dramatic demographic shifts, with people who can do so fleeing lockdown cities for anywhere that permits a modicum of freedom.

Aside from all these demographic effects, one of the worst features of the past year is how it has emboldened governments to believe they can violate the rights and liberties of their citizens, thereby giving rise to a new form of authoritarianism, as well documented in this report, which concludes, “An authoritarian response to a biomedical pandemic is not, and never will be, a humanitarian solution.”

Republished from AIER.org under Creative Commons