The day, which some believe could have a more turbulent outcome for European markets than Brexit, has arrived as French voters are heading to the polls for the second time in two weeks to conclude a presidential election in which polls suggest incumbent centrist Emmanuel Macron has the advantage in surveys over nationalist Marine Le Pen.

Polling stations are open since 7am on Sunday and set to close at 7pm (London time), when the first official estimate will also be released.

Although the televised debate (last Wednesday April 20) between the two contenders provided a boost to voting intentions in favor of Macron (by between 1 and 2 points, from 55% to 57% according to the polls), this appear to have been short-lived. Today (April 22), voting intentions for Macron fluctuated between 53% and 55% (with a margin error of between 1% and 3%).

According to Goldman, polls this close to election day have historically tended to be fairly precise for similarly tight races, which explains why prediction markets repriced Mr. Macron’s odds of winning higher at 90%, up from 80% last week. While the polls point to a Macron victory, there remains some limited scope for a victory for M. Le Pen as uncertainty around the final choice of those who voted for Jean-Luc Mélenchon in the first round remains. Furthermore, some early surprises indicate that change may be coming: as the Globe and Mail notes, Le Pen has won the voting in Guadeloupe, Martinique and French Guiana; Macron won all three in 2017.

The blackout period has started at 11pm last night (London time). This means that both contenders will have to cease campaigning – last public intervention in the media was yesterday evening on French television LCI) and no more opinion polls will be released before the run-off result.

By midday French time, 26.41% of the electorate had voted, according to figures from the interior ministry. That’s lower than at the two previous elections in 2017 and 2012 when the participation rate at the same time was 28.23% and 30.66% respectively. But it’s slightly higher than the level seen in the first round two weeks ago, when 25.48% had voted by 12 p.m.

Macron will vote in Le Touquet where he and his wife own property.

Le Pen will cast her ballot in Henin-Beaumont, a town in the north where her party holds city hall and where she was elected as lawmaker for the first time.

We’ve previewed the differences in the two platforms previously but here is a refresher courtesy of Bloomberg: needless to say, the candidates’ plans are diametrically opposed. At home, Macron, is sticking to his credo of pro-business overhauls — including an increase in the retirement age — to foster more work and make the economy more competitive. Le Pen wants the French to retire even earlier than the current minimum of 62 and promises steep cuts to sales and income taxes to help households.

In their vision of Europe, Macron is holding his trademark line on strengthening European sovereignty with projects that could include more joint-investment. While Le Pen no longer wants to exit the EU, her proposals to transform it into a looser alliance of nations and hold a referendum to assert the primacy of French law over its rules would undermine the bloc from within.

The showdown is a repeat of the 2017 election, when Macron beat Le Pen with a hefty margin of almost 33 percentage points. This time, the last polls published before Saturday’s campaigning blackout showed the gap at about 11 points; it could very well be far less.

After the first round on April 10, markets were spooked when the gap between the two candidates was as slim as two percentage points. But Macron gradually pulled further ahead as Le Pen failed to capitalize on gains she’d made by centering her campaign on how to solve a looming cost-of-living crisis. According to Bloomberg, Marine had an opportunity to close the gap during nearly three hours of live debate with Macron on Wednesday. Yet she struggled to do so, while Macron turned the spotlight on policies that echo her father’s more extremist views, such as banning the Muslim veil in all public spaces.

For her part, Le Pen told voters in northern France on the final day of campaigning Friday, that Macron was trying to “brutalize” her during the debate and that “the disdain” he showed her was reflective of how he sees the French.

At the other end of the county in the southern town of Figeac, Macron called on his supporters to convince as many people as possible to rally round him, an attempt to activate the “Republican front” — a term for cross-party opposition that has prevented the far-right from taking power. He insisted his victory isn’t a done deal.

“It’s a referendum on the future of France,” Macron told BFMTV. “I am working until midnight and then I will be in a state of humility and reflection.”

While all the polls show Emmanuel Macron is likely to win a second term Sunday, some are cautious and banks from Citigroup to asset manager Amundi warn that markets are underestimating the risk of a surprise. As for polling accuracy, let’s not forget that NYT polls showed Hillary Clinton a 85% favorite in the US election in 2016.

Needless to say, if nationalist Le Pen upsets the incumbent, European stocks will tumble Monday, while French bonds would underperform German securities and the euro could even trade at parity with the dollar in coming months, according to investors and strategists. The full consequences wouldn’t be visible until after legislative elections in June, when it would be clear whether she has a majority to back her proposals to review free trade agreements and re-establish border controls. 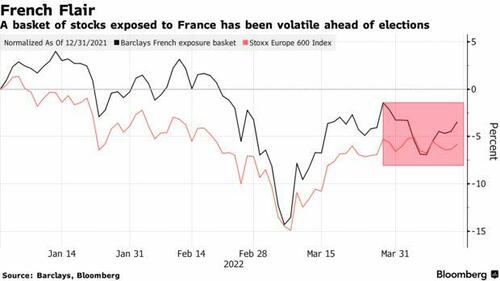 And yes, memories are still raw from 2016, when investors were blindsided by the strength of populist sentiment in the U.K.’s vote to leave the European Union and the U.S. election of Donald Trump.

“It would be an awful day for markets,” said Eric Hassid, a trader at Aurel BGC in Paris. “I still think Macron will win, but the opinion polls that come after the presidential debate will be crucial. It wouldn’t be the first time there’s a surprise. We had the same with Brexit.”

According to many, a Le Pen victory arguably would be an even bigger shock to investors, since the polls show a larger lead for Macron than they did for the U.K.’s remain vote in 2016. And French pollsters have a good track record, with surveys ahead of the 2017 election and in this year’s first round of balloting very much in line with the outcomes.

There would be “a Black Monday” in the stock market if Le Pen wins, with the Stoxx 600 probably down 6% and France’s CAC 40 Index sinking more than that, said Ludovic Labal, manager of the Strategic Europe Quality Fund at Eric Sturdza Investments.

In a note Wednesday, Barclays strategists led by Emmanuel Cau wrote they expect at least a 5% drop in equity markets in the event of a Le Pen victory but see no reason to panic right now. Oddo BHF strategist Sylvain Goyon put the probability of a Le Pen win at no greater than what it was five years ago, but such an event would be particularly unfavorable to financial stocks, while the euro would likely move below parity against the dollar.

On the credit side, Barclays strategists warned that corporate bond investors shouldn’t get too blasé about the possibility of Le Pen becoming the next president, saying that risks are skewed to the downside.

“It would only take one poll indicating a tighter race to trigger an underperformance of French credits,” the Barclays analysts wrote. “Given the lack of any risk premium in these credits, we remain wary.”

Viraj Patel, a macro strategist at Vanda Research, recommends buying credit-default swaps on Italian government bonds as a hedge against the risk of more fragmented euro area post-election. He also sees a potential Le Pen victory as sparking a “full capitulation” of those betting on a stronger euro.

“A Le Pen victory would give us the conviction we need to be calling for euro-dollar parity, but that may be more of a three- to six-month type of evolution rather than happening knee-jerk on the day,” he said.

Given that Le Pen would need to win a parliamentary majority in June to fully implement her policies, currency traders should be able to focus on other drivers for the euro such as monetary policy tightening, said Lee Hardman, a foreign-exchange analyst for MUFG Bank.

“The market potentially could overreact initially to the surprise win for Le Pen but actually the reality may not be as bad as initially feared,” he said, adding that the euro could weaken by 3% to 5% on the initial victory. “It’s going to be fairly constrained in terms of the policies she can really pursue.”

So no matter what the results of Sunday’s vote are, Bloomberg warns that market volatility could be here to stay until the legislative elections in June.