Australia passes new security law vastly expanding the government’s power to monitor computers; journalists could be imprisoned for up to ten years simply for reporting on national security matters. 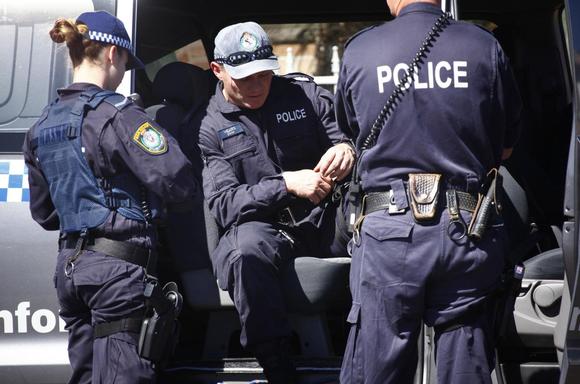 Police talk as they guard a house that was involved in pre-dawn raids in western Sydney September 18, 2014.

(Reuters) – The first of a series of security powers requested by Australia’s government to combat Islamist militants passed through parliament on Wednesday, despite criticism that they could land journalists in jail for reporting on national security.

Australia is increasingly concerned over the number of its citizens heading to Iraq and Syria to fight alongside radical Islamists, and police said they foiled a plot by the Islamic State group last month to behead a random Australian citizen.

Conservative Prime Minister Tony Abbott has warned that the balance between freedom and security “may have to shift” in the wake of a series of raids targeting what authorities say are the group’s members and supporters.

Under the legislation, which passed the lower house with support from the main opposition Labor Party, anyone disclosing information about “special intelligence operations” could face a decade in prison.

The reforms were needed to update legislation written in the 1970s, Attorney General George Brandis said, and were in the same spirit as emergency legislation passed in Britain forcing telecoms firms to retain customer data.

Justice Minister Michael Keenan said the government made “no apologies” for trying to protect the secrecy of covert intelligence operations.

“This is not, as has been wrongly suggested, about preventing the release of information that might simply embarrass the government of the day or expose it to criticism,” he said.

But the Committee to Protect Journalists said it was concerned that the legislation did not contain an exemption for journalists, which could mean they could be imprisoned for up to ten years simply for reporting on national security matters.

“This national security bill and other draft legislation raise grave concerns about the direction in which Australia is heading,” spokesman Bob Dietz said in a statement.

“These bills would seriously hamper reporting in the public interest and we urge lawmakers to add the necessary safeguards to protect journalists and whistleblowers.”

The legislation is the first of a series of laws aimed at beefing up the government’s security powers, including a controversial proposal to make it a crime for an Australian citizen to travel to any area overseas once the government has declared it off limits.

Legislation requiring telecommunications providers to keep metadata and to make it available to police and security agencies will soon be introduced as well, granting the government broader access to its citizens’ communications.