Biden Says Putin is a “Killer” Who “Doesn’t Have a Soul” After U.S. Intel Claims “Interference” in 2020 Election

After a much anticipated and hyped federal investigation and intelligence report into ‘Russia-linked cyber attacks’ found (gasp… or rather entirely as expected in yet the latest repackaged iteration of long deflated Russiagate) the Kremlin mounted an online ‘interference’ campaign related to the 2020 election, President Biden said in a bombshell ABC News interview that he agrees Vladimir Putin is a “killer” and that he’s going to pay a price. CNN reports sanctions are likely coming, specifically targeting “people close to Russia President Vladimir Putin as soon as next week.”

Here’s the key part of the pre-recorded interview with George Stephanopoulos which aired early Wednesday:

Asked whether he believes Mr Putin is a “killer” in a pre-taped interview that aired on Wednesday, the president responded: “I do.”

Mr Biden recalled meeting Mr Putin, during which he reportedly told him that he “doesn’t have a soul”: “I wasn’t being a wise guy.”

“He looked back at me and said, ‘We understand each other’,” Mr Biden said.

EXCLUSIVE: Pres. Biden told @GStephanopoulos that he agreed Russian President Vladimir Putin is a "killer" and will "pay a price" for interfering in U.S. elections. https://t.co/rIe2ms8sSv pic.twitter.com/VtAGCvF9hp

“I know him relatively well,” Biden had introduced the comments with, and added that “the most important thing dealing with foreign leaders in my experience… is just know the other guy.”

This past conversation wherein Biden says he told the Russian president he doesn’t think he has a soul has echoes with the 2001 face-to-face meeting between George W. Bush and Putin.

Bush came to the opposite conclusion at the time: “I looked the man in the eye…I was able to get a sense of his soul,” according to that famous and widely mocked moment of Bush’s soul-gazing…

Biden recounted to Stephanopoulos that during the “long talk” with the Russian leader, he informed his Russian president, “I know you and you know me. If I establish this occurred, then be prepared” — speaking of the cyberattack and election meddling allegations.

“He will pay a price,” Biden said. “We had a long talk, he and I, when we — I know him relatively well. And the conversation started off, I said, ‘I know you and you know me. If I establish thisoccurred, then be prepared.”

Stephanopoulos asked: “So you know Vladimir Putin. You think he’s a killer?”

While the president said “you’ll see” that Putin is “going to pay,” he did not elaborate.

He did say, though, that it was possible to “walk and chew gum at the same time for places where it’s in our mutual interest to to work together.” —ABC News

The 15-page Office of the Director of National Intelligence assessment is being widely reported as concluding that central to the Russian ‘interference’ was an effort to promote “Donald Trump and right-wing conspiracy theories in an attempt to discredit Mr Biden.”

…So that’s what it’s all about, apparently – resurrecting the Russiagate farce and repackaging it in different form after it failed to “stick” despite the years-long obsession of the media and political pundit class.

Meanwhile the Kremlin indicated Wednesday it’s taking “necessary measures” to prepare for any looming new US sanctions expected in the wake of the intelligence report, the conclusions of which it’s vehemently denied. Russian government spokesperson Dmitry Peskov slammed the allegations and “baseless” and ultimately “not backed by any evidence”.

The Russian ruble tumbled on the headline Wednesday… 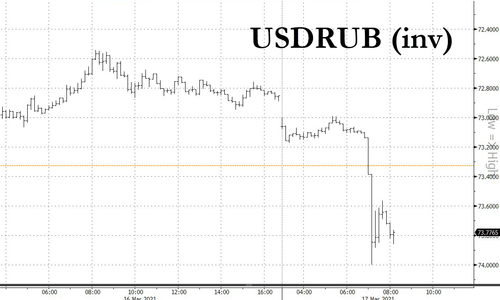 …sinking down more than 1.5% against the dollar after Biden’s remarks aired, the most significant intraday drop since Feb. 25.