Biden Suddenly Starts to Freak Out About Soaring Inflation

When discussing today’s “shock” CPI report we said that it was just a matter of time before there is a wave of political blowback that will make the recent anti-democrat revulsion in Virginia and NJ seem like amateur hour. Specifically, we said that “the explosive inflation surge threatens to exacerbate political challenges for President Brandon as he seeks to pass a nearly $2 trillion tax-and-spending package and defend razor-thin congressional majorities in next year’s midterm elections.” 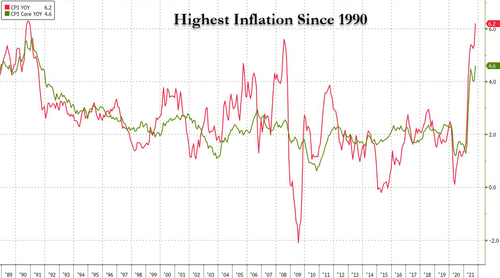 And most importantly, wage increases are NOT keeping pace with the soaring cost of living (real waged growth is negative)… 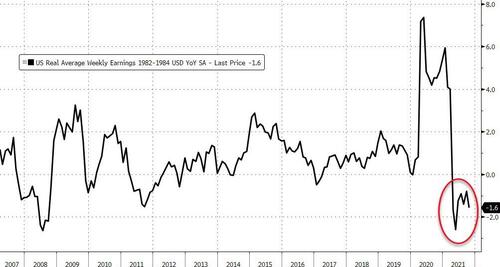 It took just a few minutes for this prediction to materialize because just around the time the market opened, Biden addressed the public and confirmed that unlike the Fed, he is finally starting to freak out about soaring prices, to wit:

… on inflation, today’s report shows an increase over last month. Inflation hurts Americans pocketbooks, and reversing this trend is a top priority for me. The largest share of the increase in prices in this report is due to rising energy costs—and in the few days since the data for this report were collected, the price of natural gas has fallen.

I have directed my National Economic Council to pursue means to try to further reduce these costs, and have asked the Federal Trade Commission to strike back at any market manipulation or price gouging in this sector.

And just how does Biden plan on pulling this directive straight out of communist China? Will he restart the Keystone XL pipeline; or will the US fund shale producers – that could be awkward in light of Joe’s faux environment concerns. Then again, it’s just optics confirming that in a time of near-record inflation, at least Biden’s talk remains extremely cheap.

And speaking of cheap talk, the president also claimed that “other price increases reflect the ongoing struggle to restore smooth operations in the economy in the restart.” Which, we assumes is what uncontrolled inflation is called by the White House today…

Hilariously, all this is happening just as Biden is still trying to shove trillions in additional, and quite inflationary fiscal stimulus down the country’s throat which, make no mistake, will lead to even higher prices but not to the White House, which continues to claim that a plan that will require trillions in funding is actually, don’t laugh, deflationary!

I am travelling to Baltimore today to highlight how my Infrastructure Bill will bring down these costs, reduce these bottlenecks, and make goods more available and less costly.

And just in case there is any doubt that Biden is contemplating replacing Powell with Hillary Clinton fangirl and Democrat Lael Brainard, Biden said he wants to “reemphasize my commitment to the independence of the federal reserve to monitor inflation, and take steps necessary to combat it.” Translation: he wants to appoint a career democrat who will make it easier to push through the $150 trillion in QE needed over the next 30 years to pretend to fund “net zero” but is really meant to make the rich richer.

Going forward, it is important that Congress pass my Build Back Better plan, which is fully paid for and does not add to the debt, and will get more Americans working by reducing the cost of child care and elder care, and help directly lower costs for American families by providing more affordable health coverage and prescription drugs—alongside cutting taxes for 50 million Americans including for most families with children. 17 Nobel Prize winners in economics have said that my plan will “ease inflationary pressures.” And my plan does this without raising taxes on those making less than $400,000 or adding to the federal debt, by requiring the wealthiest and big corporations to start to pay their fair share in taxes.

Luckily, at least one Democrat is not a lunatic and just as Biden was delivering his prepared remarks, Democratic Senator Joe Manchin said that the “threat posed by record inflation to the American people is not ‘transitory’ and is instead getting worse.”

“From the grocery store to the gas pump, Americans know the inflation tax is real and DC can no longer ignore the economic pain Americans feel every day.”

By all accounts, the threat posed by record inflation to the American people is not “transitory” and is instead getting worse. From the grocery store to the gas pump, Americans know the inflation tax is real and DC can no longer ignore the economic pain Americans feel every day.

To be clear, what he was referring to is Biden’s $1.75 trillion (which really is more like $5 trillion) BBB plan (the same as the US credit rating after it passes), which will make galloping inflation quite “hyper” and which Manchin is – at least for now – clearly opposing.