A flood of child migrants filling Texas immigration facilities has turned into a full-blown crisis in the seven weeks since President Biden took office – a stark contrast to the Trump administration, which required that migrants wait in Mexico while the United States processed asylum requests, as opposed to Biden’s policy of letting everyone in and simply trusting migrants to show up for their hearings.

In recent days, over 3,500 unaccompanied minors have been held in Customs and Border Patrol (CBP) detention centers designed for adults – while Biden officials privately warned on Friday that the administration can’t handle the influx of children, according to the Daily Mail. So far this year, apprehensions are on track to eclipse the last decade of migrant detentions, even with a notable spike in 2019.

So far in March, more than 4,200 people are arriving into America across the border per day, which if sustained would rival the 132,856 apprehensions recorded in May 2019 – which was the most in 13 years.

The surge is leading to overcrowded conditions as the CBP centers – built for adult men – and the HHS shelters do not have space for the mounting numbers. –Daily Mail. 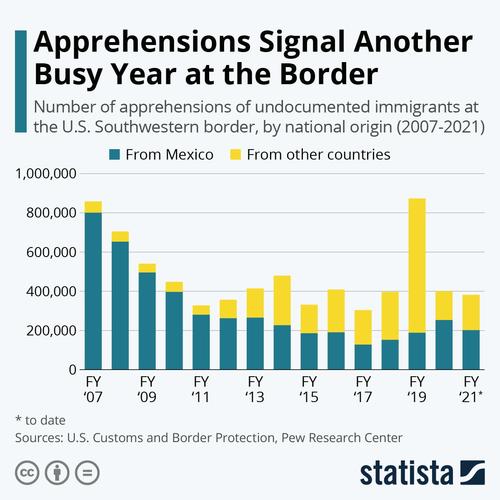 At one Border Patrol facility alone, hundreds of illegal child migrants have been crammed into packed conditions – with some sleeping on the floor because there aren’t just enough beds, they’re run out of mats, according to the Associated Press, citing nonprofit lawyers who interviewed over a dozen children at a Donna, Texas holding complex. Some of the children told attorneys that they’ve been there for a week or more in direct violation of the agency’s three-day limit for detaining child migrants. Over 130 children have been held in CBP facilities for more than 10 days, while many say they haven’t been allowed to phone their parents or other relatives who may be wondering where they are.

Despite concerns about the coronavirus, the children are kept so closely together that they can touch the person next to them, the lawyers said. Some have to wait five days or more to shower, and there isn’t always soap available, just shampoo, according to the lawyers.

“It is pretty surprising that the administration talks about the importance of transparency and then won’t let the attorneys for children set eyes on where they’re staying,” said attorney Leecia Welch of the National Center for Youth Law, adding “I find that very disappointing.”

According to the report, more children are waiting longer in Border Patrol ‘cages’ (and tents) because long-term facilities operated by the US Health and Human Services department have become quickly filled to capacity as hundreds of children are apprehended daily at far higher rates than they are being released to parents or sponsors. It takes an average of 37 days to release a child from HHS custody.

Meanwhile, ICE has been asking for volunteers to send to the US-Mexico border ‘as soon as this weekend’ to help out at the Donna, Texas facility – which is 729% over capacity, according to CBS News.

And it’s not just Texas:

The tip of the iceberg near Yuma, AZ as immigrants begin to flood into the US responding to @JoeBiden’s open border, catch and release policy. How many have COVID? pic.twitter.com/8Cu3k88etZ

“This situation mandates immediate action to protect the life and safety of federal personnel and the aliens in custody,” said ICE acting assist director for field operations, Michael Meade, in an email obtained by the Washington Post.

“Start and end dates are TBD, but could begin as soon as this weekend at location along the SWB [southwest border], most likely Texas,” he continued. “It is anticipated that the enforcement actions will continue to grow over the coming months.”

On March 2, the Donna complex was holding more than 1,800 people — 729% of its pandemic-era capacity, which is designed for 250 migrants, according to an internal CBP document reviewed by CBS News.

Most of the minors said they had only showered once while in U.S. custody, even though they’d been held for more than five days, according to Desai. Some said they had showered twice.

“They all said they wanted to shower more and were told they couldn’t,” Desai said. -CBS News

Democrats, meanwhile, are scrambling to defend Biden’s handling of the migrant surge (which he created).

“It will be nothing like what we saw in the Trump administration of babies being snatched from the arms of their parents,” said House Speaker Nancy Pelosi (D-CA) during a Thursday press briefing. “I trust the Biden administration’s policy to be based on humanitarian[ism] and love of children rather than political points or red meat for their Republican base.”

Rep. Pete Aguilar (D-CA) – vice chairman of the House Democratic Caucus, says party leaders are keeping a watchful eye on the administration to ensure guidelines – which are not being followed – are followed.

“Biden has created a crisis on the border that he won’t admit; 100,000 illegal immigrants were encountered just last month. Put that in perspective. That is larger than the hometown of Scranton, Pa., of our President Biden, and now it’s only growing month after month,” he said, adding that Biden “tears the wall down at the border, but he put one around the Capitol.”