Update (1525ET): Perhaps after witnessing the drop in the pound, No. 10 Downing Street has released some more information about Johnson’s condition. HMG said Johnson is conscious, and that he was moved to the ICU “as a precaution.”

Although we suspect many patients who haven’t pulled through have been told the same thing. Fortunately for BoJo, he’s the PM, and thus an extremely high priority patient.

Fortunately, he is conscious (assuming he isn’t already being “Weekend at Bernies”-ed), and as long as he stays that way, his odds of survival should remain strong.

Remember, the most important bit of information here is whether or not Johnson has been moved to a ventilator. The fact that Downing Street is saying he’s still conscious suggests he hasn’t been placed on ventilation, since most patients are placed in a medically-induced coma before that happens (it’s difficult to tolerate being intubated while conscious).

Even in the most sophisticated hospitals in the world, once a patient is placed on ventilator, their chances of survival shrink dramatically. NPR reminds us that most patients placed on a ventilator “still die” (mortality rates can soar to 80% or higher for the most high-risk patients). Ventilators can also increase the likelihood that a patient develops a dangerous secondary bacterial infection like we described below. These types of secondary infections are often what ultimately what kills a high-risk patient.

Johnson tested positive late last month, and was hospitalized on Sunday. Raab is ready to stand in for Johnson “if necessary”, but the UK has no clear plan for succession of Johnson were to pass away.

After being admitted to the hospital over the weekend, UK Prime Minister Boris Johnson has been taken to intensive care as his condition has apparently worsened dramatically overnight.

Dominic Raab has now been deputized to lead Britain in his place.

The Prime Minister has been taken to intensive care

PM is asking Dominic Raab to deputise for him

The news sent GBP/USD tumbling into the red on the day. 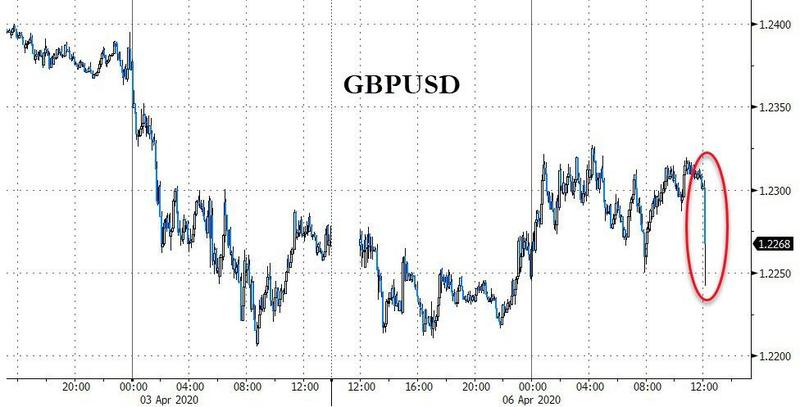 In a video message he delivered to the British people on Friday, BoJo looked extremely pale and feverish, his skin glistening with sweat, but although he sounded a bit hoarse, he didn’t appear to be having any trouble breathing. Downing Street has described his condition as “worsening.”

Remember, the thing that makes COVID-19 infections so deadly for some patients is that they can sometimes trigger a secondary bacterial infections in the lungs that lead to the destruction of lung tissue that the body simply cannot repair, or replace.

The news of BoJo’s condition is nothing short of a thunderbolt for the UK press, who will be holding a 24-hour BoJo death watch until he recovers. Of course, Britain has plenty of medical resources available to treat him, and although his condition has worsened, we suspect that doctors would be more willing to move a patient of critical importance to national security to the ICU sooner than some poor shmuck who just stumbled in the door of the nearest NHS hospital.