When legacy media outlets shill for an administration ahead of midterms, the propaganda is usually delivered in a semi-believable headline that doesn’t cause readers to immediately call bullshit.

In a late Tuesday tweet, the network asserted that “The U.S. economy has been hit with increased gas prices, inflation, and supply-chain issues due to the Ukraine crisis.”

The U.S. economy has been hit with increased gas prices, inflation, and supply-chain issues due to the Ukraine crisis. https://t.co/d9dwXWpcvf

That’s right – forget the last 6 months of Jen Psaki and President Biden pushing lies about ‘transitory’ price increases (blaming Covid and climate change, among other things). All you need to know, dear voter, is that Vladimir Putin is now to blame for the crippling inflation.

Nevermind the price of oil and CPI for the last 18 months.

The actual article itself is just as bad – with dramatic fear mongering and predictions of worse to come – all thanks to the Ukraine situation.

CBS’s tweet was widely mocked, and earned a blistering ‘ratio’ (when comments far outweigh ‘likes’ – suggesting a tweet is way off base). 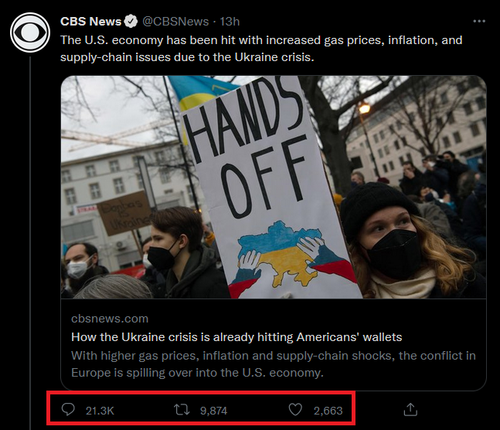 Recall what Biden said less than 90 days ago – that supply chain challenges due to ‘global challenges like climate change and Covid’ were ‘making it difficult’ to produce simple items.

The establishment's bloodlust for war–in which I include the corporate press–cannot be overstated.

Russia is a dictatorship because they have state-run media that parrots the Putin regime propaganda. Not like America, where we have a totally free press ?

The levels of gaslighting and deflection are off the charts

Dam all those expensive groceries and gas from the last two years can be attributed this happening today.

Maybe the Ukraine crisis can also explain the sky-high murder rates, the homelessness and fentanyl epidemics, and the poo-covered streets in so many US cities?