Leading From Behind: CDC Hints Mask Mandate Will End Now That States Have Moved First

For the umpteenth time since the start of the COVID pandemic, the US CDC is leading from behind.

Already, more than a dozen states including California (the largest by population) had already decided on their own to lift COVID-inspired masking measures in most public places, the federal agency is only now just ready to admit that they have served their purpose, and are ready to be retired.

NBC News apparently got the scoop: they were the first to report that the CDC is planning to finally drop its federal mask mandate – or “loosen” its guidelines on indoor masking, as NBC News writes it – as early as “next week”. CDC Director Dr. Rochelle Walensky later confirmed as much during a CDC press briefing.

Dr. Rochelle Walensky, the director of the CDC, is expected to discuss masking guidance Wednesday at a White House Covid-19 Response Team briefing.

Nothing has been finalized yet, but the CDC is considering a new benchmark for whether masks are needed, basing it on the level of severe disease and hospitalizations in a given community, two people familiar with the situation said.

The White House has been eager for the CDC to provide an update on its indoor mask recommendation, although it wants the agency to get it right and it doesn’t want to appear as though it is putting political pressure on the agency, said the two people familiar with the plans, who weren’t authorized to speak publicly.

To be sure, as Walensky herself insisted yet again (perhaps on the off chance that cases come soaring back next week, which, judging on prior data, seems highly unlikely, but we suppose not impossible) no final decisions have yet been made.

Even Dr. Anthony Fauci himself has suggested that he now feels it might be appropriate to abandon the masking guidance as the number of newly confirmed COVID cases falls sharply.

States’ making changes to their mask rules is “entirely understandable,” Fauci said. “At the local level, there is a strong feeling of need to get back to normality.”

Senior administration officials have asked Walensky to provide an update on masks before President Joe Biden’s State of the Union address on March 1, one of the people said.

The agency currently recommends universal indoor masking in areas with substantial or high transmission, which is determined by the number of cases per 100,000 and the test positivity rate. The vast majority of counties in the U.S. fall under those criteria, according to CDC data.

A few hours after the NBC News story broke, Dr Walensky confirmed some of the details during a press briefing, saying the mask guidance could finally be changed some time in late February or “early March”.

Dr. Rochelle Walensky signals CDC is not changing mask guidance yet, citing substantial or high community transmission in over 97% of U.S. counties and noting that hospitals are still overwhelmed.

"If and when we update guidance, we will communicate that clearly,” she says.

Cases and hospitalizations have fallen sharply in recent weeks, though deaths have been stubbornly high in the US. 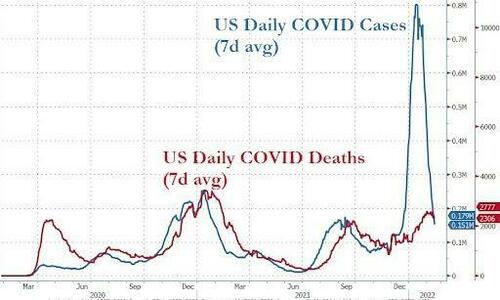